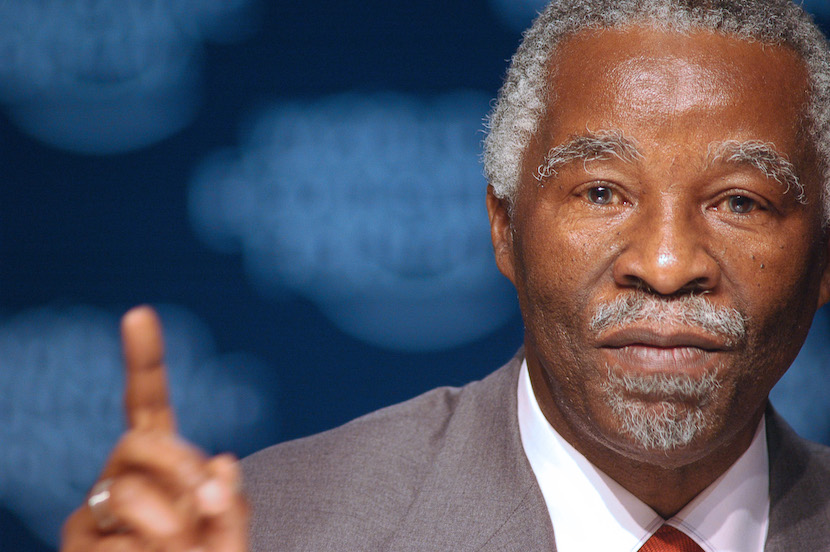 Every now and again, one of the many emails that cross the Biznews computer system, catches our eye. And below is no exception. Community member Michael Waldeck digs into the world of socialists given former President Thabo Mbeki’s recent denial that ‘his’ government was not involved in any wrongdoing around the Arms Deal. He expands this to euro-soclialism and asks the question: did the cancerous rot of self-enrichment start under Thabo Mbeki’s watch? An insightful read. – Stuart Lowman

EXORDIUM
The former President, Thabo Mbeki has backed the Seriti inquiry, saying there has never been evidence of any wrongdoing by the (his) Government or individuals (from his Government or the ANC).

In Euro-African parlance – Mbeki’s background of Socialism (Communism) predicted, that he would appropriate the ‘art’ of denial, when confronted by an academic question of superior intellect because filius est pars patris  (a ‘son’ is part of the ‘father’) considering, that Karl Marx was proven to be falsus in uno, falsus in omnibus (false in one thing, false in everything)…! Yes, Mbeki – as is the case of the majority of the ANC members – subscribe to Communism, except that Mbeki caresses the Euro-socialism context, being educated and socialised in the UK.

RAISON d’ETRE
Mbeki as a privileged child should have grown up knowing, that – as President of a Country – his (the State’s) primary concern should be salus populi suprema lex esto, i.e. ‘the welfare of the people, (which) is the highest law !’, but he chose to conveniently deny this fact by asserting, that HIV or AIDS does not exist … and thereby he inexorably exposed the soft underbelly of his African intellect because Scientia non habet inimicum, nisp ignorantem (‘Science has no enemies, but the ignorant !’) !

Now he defies the cracks in the ‘ARM’S DEAL’ by once again asserting, that there are “no hard facts or proof’ of any wrong-doing on either his part or those under his tuition as Commander-in-Chief and blatantly requests, that we should blindly accept his version of the facts and in actual fact thereby attempts to create an imperium in imperio (‘an empire within an empire’) of what constitutes the truth and what is a fatal fallacy in his reasoning. He figuratively underestimates his countrymen’s intellect by creating an illusionary ‘desert’ of facts and then calls his judgment thereon ‘peace’ – as it were. Let’s put the issue to bed, i.e. solitudinem fecerunt, pacem appelunt !  [a desert(ed) (place), called peace]

AVANTE-PROPOS
Petitio principii – ‘the question begs’, when will Mbeki and his adherents evolve to become inculcated with a profound sense of accountability (spiritual conscience) or will they continue to profligate to the whims of the ANC (African Nepotists and Cronies), who govern by a majority (Proletariat), but are lead by a minority (bourgeois) !

Mbeki clearly reflects the Communist dictum trahison des clercs  (‘betrayal by the intellectuals’)- those, who betray truth and justice for political gain … when he should in actual fact realise, that with education comes obseqium et officium  (‘privilege brings obligation’) because Education per se, calls for responsibility toward fellow homo-sapiens.  Unfortunately his so-called African Renaissance belies the adage: tempora mutantur nos et mutamur in illis (‘times change and we change with them’).

What Mbeki well achieves with his denial of the ‘Arm’s Deal’ is merely, that he forfeits the right to be heard innocently and consequently makes it abundantly clear, that his (remaining) cupido dominandi cunctis adfectibus flagrentior est  (‘lust for power, inflames his heart more, than any other passion’) !

Mbeki should fully realize, that no person commodum ex iniuria sua nemo habere debet [‘ought to have an advantage from his own wrong (views)’] because cupiditas ex homine, cupido ex stulto numquam tollitur  (‘a man can be cured of his lust, but a fool can never be cured of his greed’) !  It can be (safely) argued, that under the guidance of Mbeki as the Head of State, the cancerous rot of self-enrichment was conceived and hence one of the hallmarks of his era, that corruptisima re publica plurimae leges (‘in the most corrupt States, there are the most laws’) and the only feasible manner in which to break this circulus vitiosus  (‘vicious circle’) is, to cedant arma togae (‘let Arms yield to the Toga’).

POUR PRENDRE CONGE
May our hope not be scuppered by the ancient regime [‘political and social order of the previous Government’(under Mbeki)] with regards, to eventually finding out the truth behind the ‘Arm’s Deal – who gave the green light initially, which lead to the corruption?

The South African Public will always have an arriere-pensee (‘mental reservation’), until one day force majeure circumstances dictate, that it is time for the unfailing truth to expose the kingpin and his cronies and their motives of the ‘Arm’s Deal’…

Post Scriptum: ‘The Politician (and Lawyer), when engaged in a dispute, care nothing about the rights (merits) of the question, but are anxious only to convince his hearers of his own assertions !’
Socrates – [in the ‘Dialogues of Plato’  (470 – 399 BC)]