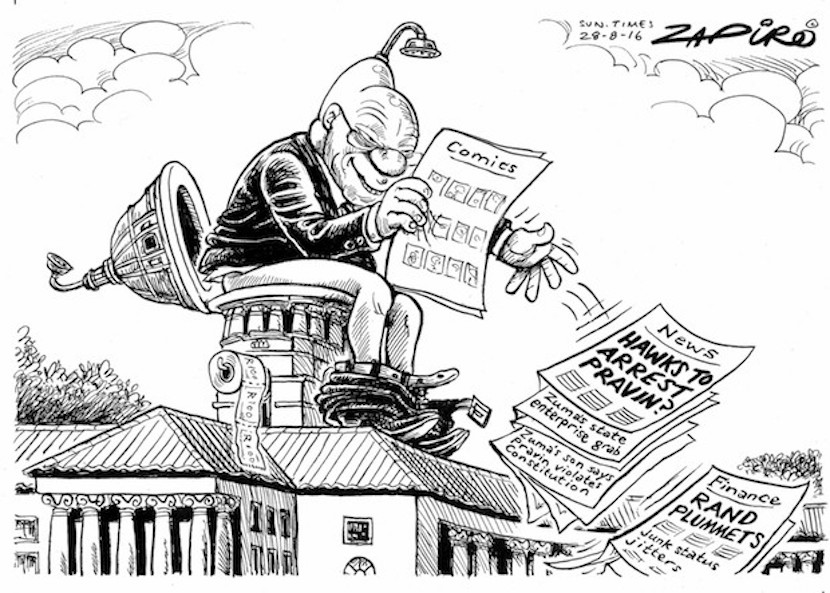 March 31st will go down in South African history as “banana republic day”. This is the day a teacher was handed the Finance portfolio. Downgrades will follow the turbulence. The Rand already lost 5% just overnight.

This is equivalent to Julius Caesar crossing the Rubicon – with the intent to knock out Democracy and replace it with Autocracy. Zuma is trying to “go for control” as in the card game Hearts.

The question is whether his gamble will succeed? The DA has already filed for a No-confidence motion in Parliament, but Mbeki was recalled by his Party not ousted by Parliament. Whether the centre of power has shifted from Luthuli House to the National Assembly remains to be seen. Your first clue will be whether or not they will allow a secret ballot on the No-confidence voting. This could allow the discontent within the ANC to translate into a vote for recall, as Parliament does have those powers.

Will the SACP have the guts to stand on its principles? Its seven minister in the Cabinet should resign, to lead the revolt against this attack on Treasury. Or have they been numbed by Capitalism like the pigs in Animal Farm? They say they will contest the 2019 election in their own right, so why not throw down the gauntlet today and spend the next two years campaigning? Against a weakened ANC.

The failure of the proportional representation system lies behind this debacle. Luthuli House “deploys” members of Parliament, but in this case the President merely informed the ruling party of his decisions. He is now a dictator in all but name only. Only Parliament can stop him now, but MPs are not elected by their ridings. Their futures don’t depend on what PEOPLE think. This is not “people-power” (i.e. Demo-cracy). This is Vanguard-power.

God help Jackson Mthembu to do the right thing. Let ruling party MPs vote by their conscience. Let them stay away or abstain if they want to replace Zuma. Let the vote be secret.