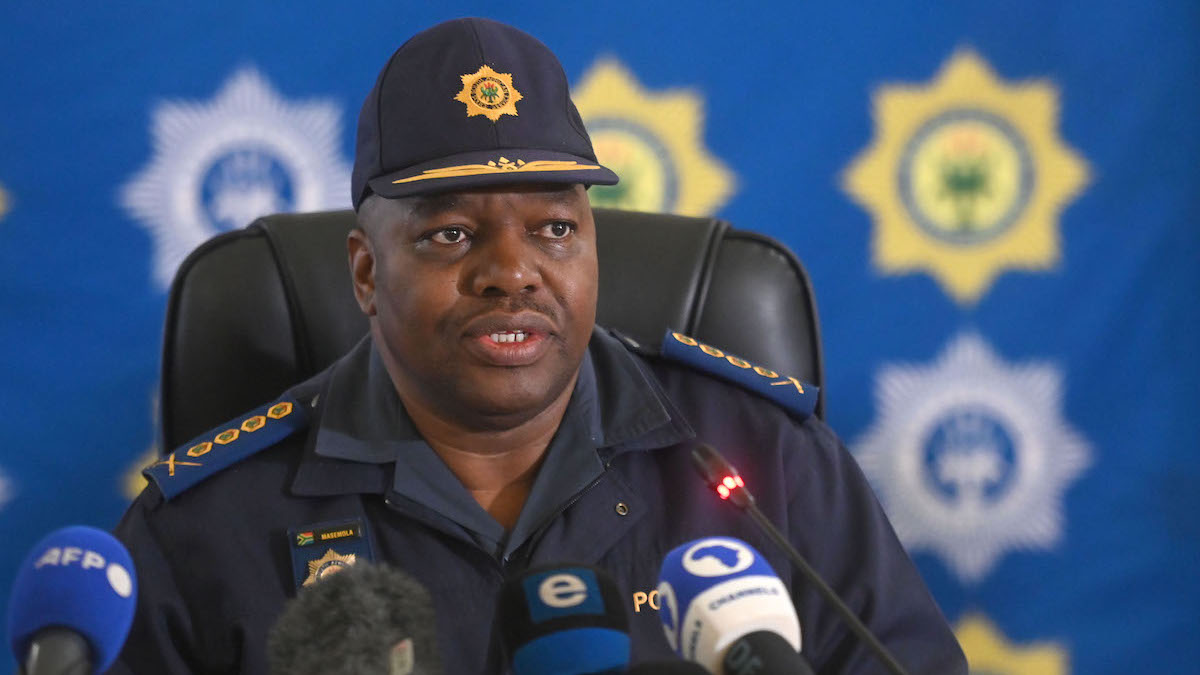 The key question from this cracking interview with forensic investigator Paul O’Sullivan is whether Cyril Ramaphosa’s appointment of SA’s “very high risk” police commissioner was the result of neglect, incompetence or wilful deceit. Despite being provided by O’Sullivan with hard evidence that Fannie Masemola spends much more than he earns, overlaid by concerns that he’d spent six years as deputy to a corrupt former boss, SA’s president still appointed him police chief. His endorsement was included in Ramaphosa’s State of the Nation Address, where he spoke of his confidence that Masemola was “more than up to this task and responsibility”. In this powerful interview, O’Sullivan explains his detailed investigation ahead of the appointment and reveals six of the eight candidates were unsuitable; Masemola among them was described as “very high risk”.

Cyril had the facts on allegedly corrupt Police Chief Masemola before appointing him.

As with many things in South Africa, the news that our president appointed an allegedly corrupt police chief does not come as a shock to the BizNews community. One member of the tribe captured this notion perfectly with the comment “What a surprise a crooked SA Police General….. Goes with the whole Ministry.”

Bruce McDonald said; “Keep up the good work, no matter how futile it appears to be. SAPS just like every other “state owned entity” is past the point of being fixed with out total regime change and a possible reintroduction of the death penalty for crimes against humanity and treason.”

Lorenz Mielke said; “The sheer arrogance of the people responsible for ensuring the “System” is conducive to highly unethical practices in all spheres affecting society is mind-boggling.”

Solomon Ndubane said; “The reason Ramaphala hired Masemola was to capture him knowing the guy is compromised & as such he was going to do the bidding for no. 1. Its so sad, Ramaphala must be exposed & be charged”

Geoff Coles said; “What a surprise a crooked SA Police General….. Goes with the whole Ministry, Cele included…. But Ramaphosa does deceit and corruption, a way of life.”

Gupta’s pet said; “Reminder, the bee chameleon invincible president has said that he would rather be seen as a weak president than split the corrupt ANC. Cadres protect cadres, at the expense of the country and the citizens.”

BigThief said; “Ramaphosa is so much part of the problem.”

Tracer ZA said; “Cyril the imposter is no different to the rest of them……”

Ty said; “Why is it so damn difficult to vet people properly and place the best person for the job in this country, it’s not bloody rocket science!”

Robert Davidson said; “Ramaphosa has the veneer of credibility having been the Bidvest chairman. New Bidvest CEO, Nompumelelo Thembekile Madisa “Mpumi” personal friends with Cyril. But he is as filthy as the rest of the cabaal…imagine a normal citizen got caught with all those dollars. The full might of the law would be brought down upon them. Frankly I’d rather have Julius….better the devil you know….”

Lindelani Mthembu said; “In a normal society, this corrupt, dictator, useless, dangerous and incompetent president would have been called to resign immediately. #CRiminal17MUSTGo”

Charmaine Francis said; “Thank you Alec and Paul.  I appreciate what you are striving to do for this country – ruled by politicians with hearts of stone and who have no soul. The mesage for the ruling party – your unethical behaviour will be your comeuppance in the end.”

Jo Maxwell said; “Cyril (the one without a backbone) has let the country down by his continued appointments of totally the wrong people to positions they are ill equipped for, but let’s face it, he has also followed Zuma with cadre deployment.”

Clive Logan said; “Cyril is as corrupt as those he is trying to protect”

Gail Allwn said; “Thank you Paul. Your relentless efforts for honesty and clean moral governance is appreciated. I’m sure I speak for most of society whose interest you work so hard in. Thanks Alec for another enlightening interview. To you both gentleman, Blessings and thanks thanks”

Philip Gee said; “This is so depressing, no hope.”

Larry Meyer said; “Frigging breath taking to know there is unrelenting efforts to hold ANC accountable and route out corruption.”

Paul is a hypocrite

It seems some members of the BizNews tribe were less focused on Paul O’Sullivan exposing Cyril Ramaphosa’s alleged corruption, and more interested in the forensic investigation consultant losing it with SABC Morning Live anchor Sakina Kamwendo, after she questioned his possible involvement in the Phala Phala saga.

Mpho Thulo said; “Paul is a hypocrite,he threatened Sakhina (SABC) for a simple question, listen to that before you see him as hero”

Earlymorrningcoffee said; “Sullivan thinks that squirrel listens to him because he whitewashed his son. Sorry pal, as much as I like the work you do there are no honest people in the ANC, it is a crime syndicate masquerading as a government.”

What are your thoughts on Paul O’Sullivan’s take on Cyril Ramaphosa’s appointment of SA’s “very high risk” police commissioner? Share your views below.