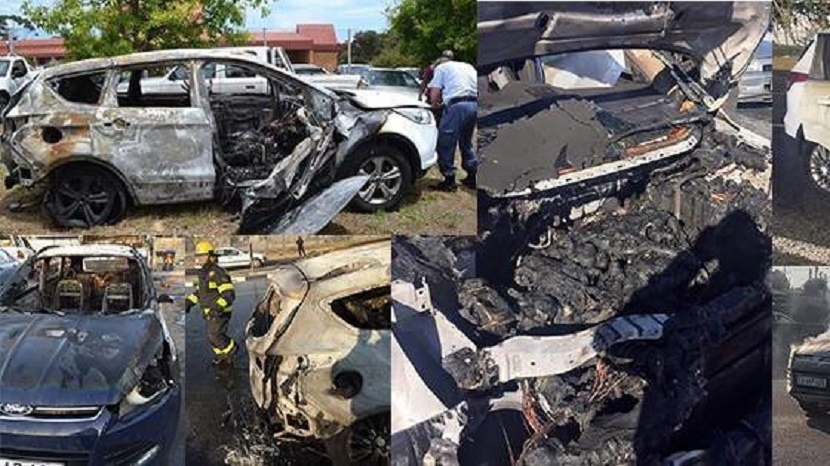 After a number of incidents across South Africa the issue of Ford Kuga’s catching fire came to something of a head in December 2016 as owners took to social media to vent their growing frustration and safety concerns. After a level of investigation into the matter, as well as an interim solution, Ford South Africa has now officially announced a recall on 1.6 litre models to address the problem. Full announcement from Ford below – Miles Downard

PRETORIA, South Africa, January 16, 2017 – Ford South Africa is issuing a safety recall for Kuga models equipped with the 1.6-litre engine to address an engine overheating condition that could cause a fire.

A total of 4,556 vehicles are affected by this safety recall in South Africa, and were built between December, 2012 and February, 2014. Ford Kuga models with 1.5-litre and 2.0-litre engines are not affected.

We have investigated the incidents as they have been reported to us, removing many parts for detailed examination in our engineering facilities in Europe and North America. The data collected from the recent incidents and the maintenance checks we are conducting through our dealers have helped us to determine the root cause of the fires.

While we continue to investigate the Kuga 1.6 engine compartment fires, based on the current data we have determined that the fires are due to engine overheating. This is caused by a lack of coolant circulation which can lead to a cracking in the cylinder head and, therefore, an oil leak. If the leaking oil reaches a hot engine surface, it can potentially catch fire. We are not aware of any injuries resulting from the engine compartment fires.

With this safety recall, all affected vehicles, including those that have already been checked, must be taken to a Ford dealership as soon as possible. This safety recall comprises two stages.

The first stage involves replacing affected components on the cooling system, verifying and updating the software and conducting an oil leak check on the cylinder head.

If any Kuga 1.6 owner sees any indication that the engine may be overheating or experiences warnings on the instrument cluster, they should pull over as soon as it is safe to do so, switch off the engine and ensure all occupants are safely out of the vehicle. For safety reasons, the bonnet must not be opened.

I think #FordKuga is handling this thing very badly. The knock their brand x sales will take will be karmatic but won't bring ⚰back sadly

The emergency services should be called first, if required, then Ford’s Roadside Assistance on 0861 150 250. Supported through the AA, this service is available 24/7.

The 1.6 Kuga is safe to drive, provided the integrity of the cooling system is maintained, and this safety recall has been actioned.

The next stage will make the cooling system even more robust, and is likely to involve further changes to parts and warning systems. We are currently ensuring that the changes we make are complete and thoroughly tested – and will communicate with our customers as soon as this stage commences.

Every effort is being made to minimize inconvenience, and reassure customers that their safety is our top priority.

We are committed to keeping our customers mobile. Should a customer experience any engine overheating problem with their 1.6 Kuga, or delays in the repair due to a shortage of parts, arrangements will be made through the nearest Ford dealer and Ford Customer Service to provide a courtesy car while the vehicle is repaired.

Any customer concerns or queries can be directed to Ford Customer Service at 0860 011 022.

Pretoria – Ford has come up with excuses to protect their brand instead of giving the family closure, says a relative of Reshall Jimmy who died when his Ford Kuga caught fire in December 2015.

“They have not being doing the right thing… all of the time and resources they spent [misleading] media and any educated person reading the bogus report, they could [have] spent finding what caused the actual fire,” Reshall’s brother, Kaveen Jimmy said on Monday following Ford’s press briefing in Pretoria.

#FordKuga what about those who simply don't want a Kuga anymore? Ford sold defective product – reimburse.

Kaveen said his 33-year-old brother was visiting George in the Western Cape when the incident happened.

He said on the evening of the incident his brother drove to his hotel and “less than a few kilometres from driving out, as he turned onto one of the main roads, his car burst into flames”.

He said his brother was trapped in his car with his seat belt still secured.

“The family only found out four days later… we couldn’t get hold of him, we thought he had taken some quiet time, and that is not a way anyone should lose their loved ones.

Brands must ‘take every life seriously’

“They [Ford] made no attempt to contact us. We really appreciate [president of Ford Motor Company of South Africa] Jeff Nemeth’s condolences today [Monday]. Couldn’t they do that two months after he passed away?” he said, noting that the company had chosen a public platform to offer its sympathies.

He said they were trying to ensure that brands such as Ford “take every life seriously”.

Kaveen said he believed half of the battle had been won.

“Our main goal was to get the Kugas 1.6 in South Africa… recalled so that the safety of South Africans can be protected.

“The next level of the battle is to get Ford to accept [and] to look at the evidence of what caused my brother’s very senseless death and for us to get closure.”

Their attorney Rod Montano said an inquest was being conducted into Jimmy’s death.

He said the matter was currently under investigation with the George SAPS.

Earlier on Monday Nemeth announced a huge recall of the Ford Kuga.

The SUVs in question have all been fitted with the automaker’s 1.6l EcoBoost engine and the problem seems to be only with South African Kuga models.

He said if any Kuga 1.6 owner sees any indication that the engine might be overheating or sees any warnings, they should pull over as soon as it is safe to do so, switch off the engine and ensure all occupants are safe.

Nemeth said Ford appreciated the high level of concern and disappointment that has been expressed surrounding the issue.

“Ford is built on providing our customers with quality products and service. We have determined that the fires are due to overheating, caused by lack of cooling and circulation.

“We can confirm that a total of 39 incidents have been reported.”

In December 2016, the automaker released a statement after a Kuga 1.6 EcoBoost SUV caught fire.

It notified owners that it was investigating reports of engine fires in that model and asked owners to take their vehicle to their dealer for a maintenance check.

National consumer commissioner Ebrahim Mohamed told reporters in Pretoria that a product that poses any risks to consumers does not have a place in the market.

#FordKuga So @FordSouthAfrica MUST explain: Why did it take 43 burnouts & the death of a motorist for them to take action?

He said in early December 2016 a member of staff had alerted the commission to incidences involving consumers who had had life threatening experiences with the Ford Kuga.

However the National Consumer Commission (NCC) had not received any complaints from individuals about the incident.

He said over the past few weeks the NCC had noted with concern that many more incidences had taken place and consumers were still at risk.

He said the issue had dragged on for far too long and they had approached Ford to conduct an investigation to find the actual cause of fires in the vehicles to enable them to repair or to replace the faulty components. – News24