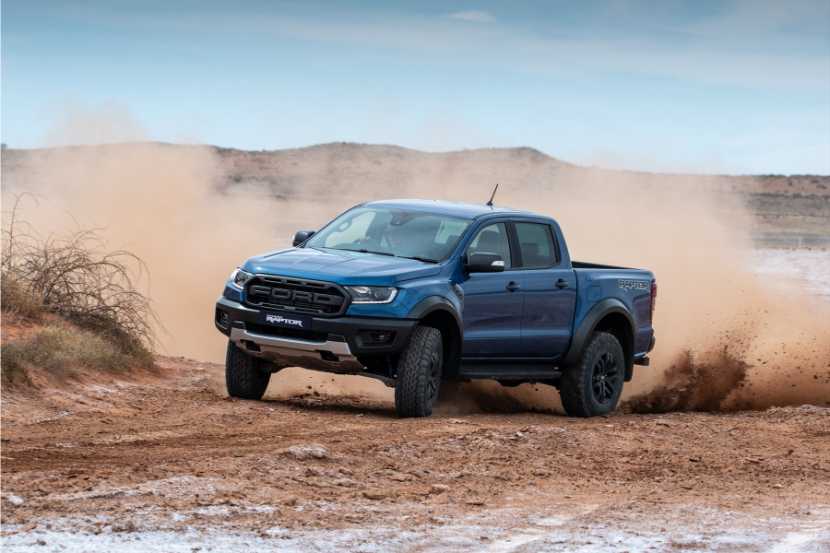 Ford’s Ranger is South Africa’s best selling double cab, which as I found out not so long ago is for good reason. Double cabs are the best of both worlds, leisure on the weekend and workhorse the rest of the time. The Ranger does that mix best.

Well, until today, because now there’s a new halo car from Ford Performance division called the Ranger Raptor and it’s a rather special animal.

Outwardly there’s a revised grille, wider fenders and arches, a neat set of rock slider running boards and some Raptor badges. Personally I think it looks great, everything a performance bakkie should be. But it’s under the skin where the actual performance lies, of course.

So what you get is a completely revised ladder chassis, reinforced in all the right places for the pounding the Raptor can handle. Overall centre of gravity has been lowered despite 51mm more ground clearance. At the rear the leaf spring setup from the Ranger is replaced by a watts linkage independent coil configuration. This gives better lateral control while also laying the path for some special dampers. Up front is a set of aluminium control arms, lengthened for a wider track and more travel, not to mention reducing unsprung mass.

Sprung mass is controlled on all four corners by a specially developed set of Fox Motorsport dampers. Ford’s performance team in Australia spent two years in the outback with Fox, refining the on and off road capabilities of the Raptor. Also along for the ride was the team at BF Goodrich tyres, providing a set of 17inch VR2 all terrains that are the best in the business.

The results are simply unbelievable. This is a bakkie that rides like a well sorted SUV on the road yet can tackle an off-road race as it stands on the showroom floor. At the vehicle’s launch out in the salt pans and dunes of Upington in the Northern Cape we put the Raptor through a myriad of arduous tests, from oval track oversteer to low speed sandy obstacles to high speed endurance race style tracks (with jumps at national highway speeds) and the Raptor not only handled the punishment but begged for more.

That mechanical ability is enhanced by six driving modes, being Normal and Sport for tarmac and then Rock, Grass/Gravel/Snow and Mud/Sand for proper 4x4ing when used with high or low range and lastly Baja mode. That’s named after the famed Baja 1000 off-road race run in Central America, known best for its high speeds and long distance jumping. Baja mode dials back the traction control, lightens the steering effort and puts the throttle and gearbox on maximum attack.

And if a bunch of journalists wasn’t enough to throw at the Raptor, Ford brought along their works off-road team race driver to show us how it’s really done on the high speed track. I’ve not experienced a production vehicle capable of anything like that in my life. Even the race driver was surprised he hadn’t broken something over the multiple days of testing.

Powering the Ranger Raptor is the same 2.0 litre bi-turbo diesel unit you’d find in the Ranger. That’s pared with the same 10 speed automatic gearbox too. Offering 154kW and 500 torques it offers decent performance but could probably do with a bit more grunt considering the ability the chassis provides.

Given the above one might expect the Raptor to cost an arm and a leg, but at around R100,000 more than a Ranger Wildtrak its list price of R786,400 is actually something of a bargain when you consider the suspension and chassis related enhancements.

The Ranger Raptor is a bakkie that I’ve been absolutely dying to drive since it was first conceived some two years ago. To have it made here in South Africa at Ford’s plant near Pretoria is rather special too but it is a curious offering. There are no competitors so it’s a white space niche that Ford has carved out and it is so capable off-road, especially at higher speeds, I’m left wondering whether a potential buyer would ever explore even half of its ability.

Perhaps it comes down to the same argument one might have surrounding a super car. Most super car owners never get near the full potential of their machinery either, but the ownership experience is about more than that. The Ranger Raptor is about as cool as one can get in the off-road scene and as I’ve said, about as good on dirt as one can expect from something off the shelf. But unlike a super car the Raptor will take you and the kids on the morning run, tow your boat or carry a load of cement too. If gravel is your playground, this is your motoring nirvana.