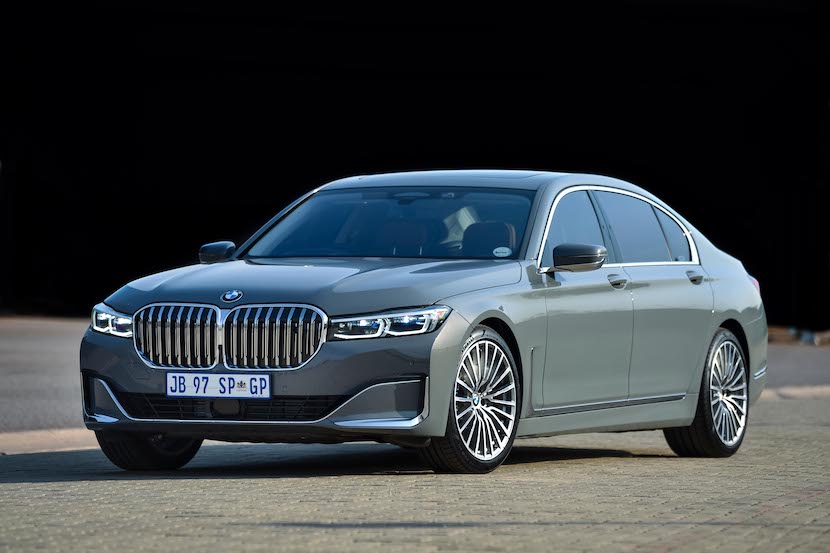 BMW’s grand saloon has an undeniable presence. From the oversized kidney grille that dominates the front end, to the sheer dimensions of the 7 Series – you’re not going to miss it driving by.

The size of the BMW 730Ld pays dividends where it matters most. Inside, it is vast. With the optional Executive Lounge package (R167,500), rear passengers can stretch out in comfort. The rear seats recline, as the front passenger seat powers forward, revealing a foot rest. Also included in this pricey package is a massage function, rear seat ventilation and heating, as well as an entertainment system – perfect for soothing the brow of a stressed-out oligarch.

Naturally, the seats are trimmed in leather, as is nearly everything else. You’d be hard-pressed to find a surface in the 730Ld’s plush cabin that isn’t covered in fine hide, wood trim, alcantara or thick carpeting.

But what’s it like to drive? Supremely refined, for a start. Fitted with a turbodiesel engine, the 730Ld barely makes itself heard at start-up. Then again, BMWs 3.0-litre straight-six diesel is a masterpiece. Punchy, frugal and sophisticated. The 30d powertrain produces 195 kW and 620Nm of power. It’s the torque that really makes the big Beemer a joy to pilot.

Available from just 2000 rpm, it enables the 730Ld to progress effortlessly. Wondrous air suspension carries the BMW, soaking up bumps and obliterating undulations. The 7 Series dismisses potholes as conspiracies. While it is comfortable most of the time, you can catch the air suspension out from time to time. Over sudden crests – such as the ones found on Rhodes Avenue in Cape Town, for example – the suspension fails to act quickly enough, unsettling an otherwise perfect ride.

Minor niggles aside, the 730Ld is rather sprightly for a car weighing two tons. BMW claims 0-100 km/h in 6.2 seconds. Impressive, but not particularly interesting in a car such as this. The manufacturer also claims the big BMW can average 5.7 L/100 km. That may be a bit ambitious, but averaging 6.5 L – 7.5 L/100 km is possible.

This leviathan doesn’t mind corners, either. The steering, though light and comfort-oriented, is still quick and precise enough to entertain.

Perhaps the most controversial aspect of the facelifted 7 Series is the styling. The grille is sure to divide opinion, with people either loving or hating it. I’m in the former camp – I think the big grille works on this large and imposing saloon, lending it much-needed gravitas that was lacking from the pre-facelift model.

The 730Ld doesn’t have the stage all to itself, though. The recently launched Mercedes-Benz S-Class is set to do battle with Munich’s flagship, while the Lexus LS500 flies the flag for Japan. Land Rover will sell you something equally exquisite and comfortable too, in the form of the Range Rover Vogue.

So which one to go for? That’s a tough question. Early reports indicate that the new S-Class is a mightily impressive luxury car. The Lexus offers stellar attention to detail and the Range Rover has the added benefit of off-road capability.

But if you want your grand saloon infused with a hint of sporting driver appeal, the BMW 730Ld is certainly worth your consideration. Priced at just under R2 million, the 730Ld is really only in the reach of the 1% – politicians, celebrities and high-flying executives. But, if you find yourself a part of that highly exclusive club and fancy a 7 Series, you’ll be faced with a problem.

Chauffeur or no chauffeur?