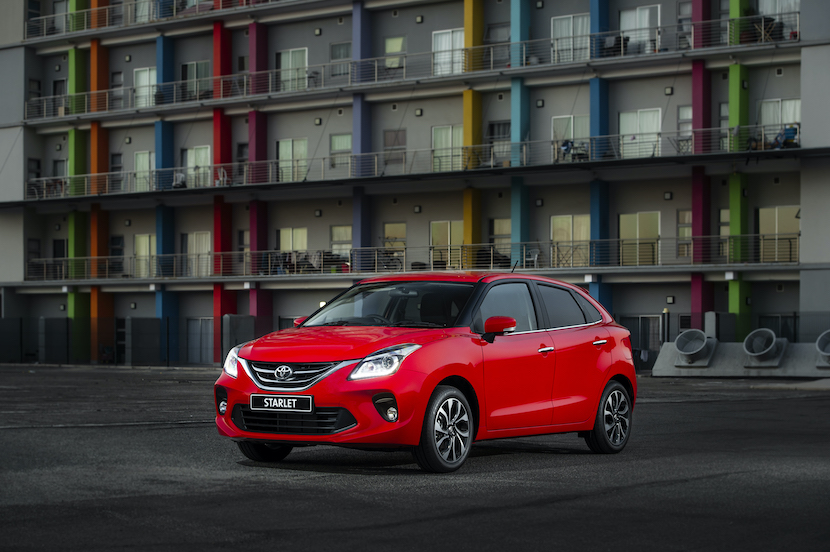 Starlet – a relatively unknown name here in South Africa. Overseas – and particularly in Japan – the Starlet is somewhat of a cult classic. Last produced in 1999, the Starlet Glanza V packs a turbocharged 1.4-litre engine that produced (when new) 103 kW. This propelled the Japan-only hot hatch to 100 km/h in just 8.2 seconds.

If you don’t live in Japan – or spend many hours playing Gran Turismo 2 – chances are you’ve never heard of it. But the old Starlet doesn’t have much in common with the new one, now offered in South Africa.

Wondering why it looks so familiar? Well, the new Toyota Starlet is actually just a rebadged Suzuki Baleno. In the Toyota range, it replaces the Etios – Toyota’s budget offering that first saw the light nearly a decade ago.

Five models are on offer, all utilising the same 68 kW naturally-aspirated 1.4-litre petrol engine. The model I sampled was the mid-range Xs, equipped with a four-speed automatic gearbox. Priced at R238 900, the self-shifting Starlet comes with everything you could reasonably expect. All-round electric windows, air-conditioning, central locking and a trip computer all form part of the comprehensive standard features list.

Safety wise, two airbags and ABS with EBD and Brake Assist are standard. If you can’t live without a touchscreen audio system, cruise control or push-button start then a plusher Xr derivative is available.

The interior of the Starlet feels suitably solid. You won’t find plush, soft-touch materials but everything feels nicely put together. This translates well when on the move. You won’t hear any rattles or squeaks and at motorway speed, wind and road noise are kept to a minimum.

The 1,4-litre powertrain seems up to the job of moving the Starlet about. With just 135 Nm of torque, it can struggle when going uphill or overtaking at motorway speeds. The four-speed automatic doesn’t help, either. Put simply, it’s rather old fashioned and dulls responses quite notably. The five-speed manual would be a far better choice, proving to be a better partner to the peppy 1,4-litre.

In town, the auto ‘box shifts smoothly. It’s at higher speeds where it becomes indecisive, changing up or down more than it needs to. Although Toyota claims the automatic Starlet is capable of 5,4 L/100 km, I managed a figure of just 6,4 L – still an impressive figure. The steering (though precise) does feel numb, particularly at lower speeds. For a B-segment contender, the Starlet has a wonderfully supple ride, besting bigger and more expensive cars.

Interior space beats the Etios hands down, offering a cavernous cabin with plenty of rear legroom. The boot is notably large, too. Measuring 345 L (1,045 L with the rear seats folded down) it beats rivals from Volkswagen and Renault by a considerable margin.

So what should you spend your hard-earned cash on, the Baleno or Starlet? Well, Toyota offers five Starlet trim grades while Suzuki offers just three. Suzuki does counter with a four-year/60 000 km service plan, besting the three services/45 000 km that Toyota offers with the Starlet. Both come standard with a three-year/100 000 km warranty, though. Add in the fact that Toyota has a notably larger dealer network and the seemingly simple decision becomes tougher than you’d think.

Whichever one you go for, you’re getting a hugely competent hatchback. If it’s the Starlet, the Xs Manual is probably the pick of the range. At R219 500, it offers all the equipment one could need from a runabout at an attractive price.

Spent some time behind the wheel of the @ToyotaSA Starlet 1,4 Xs AT. Plenty of space, compliant ride and rather frugal, too. Would opt for the five-speed manual over the old-fashioned four-speed auto, though. Look out for a review on @BizNewsCOM pic.twitter.com/ndvH3U524I