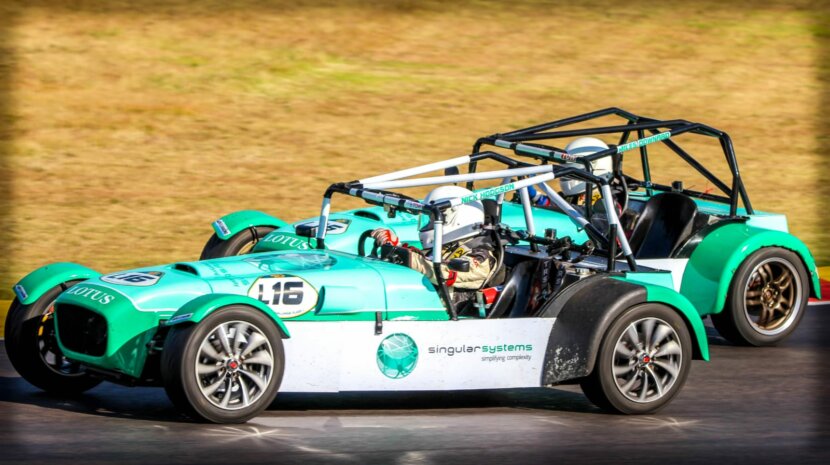 I swing past the Garmin head office in Rosebank to speak to a new acquaintance about an exciting new device from the world’s best known GPS company. It’s called the Catalyst and is supposed to help hone one’s driving on track. More on that later.

Normally I’d be frantically checking and rechecking I’d packed everything needed for a race weekend by now but being a ‘local’ race at Zwartkops it wouldn’t be a complete disaster if I’d left something at home. A less stressful evening, then which afforded me some time to get to grips with the new toy, the Garmin Catalyst.

It’s quite a device, comprising a 7-inch tablet along with a separate camera unit. The device itself has an inbuilt 10hz GPS unit to track your speed while on circuit, while the camera records the exact lines you follow. The combination allows the device’s AI to explain, in fairly plain English, what your best sectors were, why they were better and how to repeat them consistently.

Another benefit of a local race is not needing to leave home at the crack of dawn. Accordingly there’s no loss of brownie points for waking up the wife. With the VW Caravelle loaded and the trailer hitched, I set off for Zwartkops. Then my woes commenced. Rush hour, sort of, meant progress was slow and the start of our first practice session was looming.

I’m frantically trying to get my suit and shoes on in the hope I’ll get a couple of laps in before the end of the session. Something that never happens at race meetings is the schedule running early but it was and I hadn’t even noticed. As I did up my helmet to get in the car I saw the chequered flag waving for the end of practice 1.

This did allow me some time to fiddle with fitting the Catalyst to my dashboard, which in a Lotus 7 is a lot more difficult than a car with a windscreen where you can just use the supplied suction cups. I also needed to wire the device into the car’s electrical system, another thing you wouldn’t need in a conventional car.

I sat down on the couch having had a fair day’s worth of practice but nothing that blew anyone’s socks off. The car had run quite well, albeit with a slight misfire. I had been quick enough to be fighting for the last step of the podium but now I was really going to get into the Catalysts data to try and understand how I could improve for qualifying the next day.

It’s truly a remarkable system that Garmin has developed here. The Catalyst puts together what it calls “opportunities” from each session, highlighting what you did in each sector of the track that made you faster on a given lap, over your average. It told me that I was being very inconsistent in turn 1 and could gain 0.3 seconds. Turn 2 it said I was trying to carry too much speed which affected my ability to get on the accelerator early and power my way down the long straight to come. Then in turn 4 it said I was braking too much and could gain a few tenths if I was braver. Overall that meant I could gain nearly a second worth of lap time. That’s massive.

Being able to review the video footage side by side with that level of inbuilt data interrogation is also incredibly useful. It allowed me to see brake markers, turn in points and general inconsistency in my lines through corners right there on the fly without the need to wade through hours of GoPro footage.

I was feeling confident for qualifying early the next morning but needed some sleep, so off to bed for an early night.

I roll back into the pits with a broken spirit. The car sounded rather rough during warm up in the morning but I thought maybe it was just down to the cold weather. I was wrong. While wiring the Garmin into the car I had obviously loosened a wire off the ECU which was the cause of my misfire and it had got a whole lot worse in qualifying. I had almost considered abandoning the session because the misfire was so bad but fortunately I persevered because at full throttle the effect was minimal. I had managed a time good enough for 5th on the grid. Not all was lost.

I’m lined up on the grid, eyes fixed on the red lights. A short shudder as the tyres find some grip and we’re off. Immediately I see a move open up into turn 2 so I head for the inside. Alas, I’m blocked off by a slow moving Class B car and have to wait my turn. Coming into turn 5 there’s commotion up ahead as the 2nd place man spins but fortunately we all avoid him and keep going. Great, I’m in 4th now. Unfortunately that’s where I ended the race but not after a long hard fought battle with the man ahead. It was 8 of the most intense laps I’ve had in my season and a bit in the Lotus Challenge. Concentration was off the scale as I attempted overtakes, tried to force errors and tried to block counter attacks.

I’m back at the Catalyst, rewatching the race to see what I could learn. This time less about ultimate lap time and more about how the person ahead defended their position and what I could have done better to make an overtake stick.

Rolling back into the pits after heat 2 I had once again had an incredible battle, this time between myself and two other cars for 3rd place. I had finished 5th, and 4th overall for the day on combined race time. I can’t say I was elated at the result but I had two of the most fun races of my ‘career’ and learned a lot in the process. Incidentally I had also set the 2nd quickest lap time of the weekend in the last race and that bodes very well for our next race meeting which is at Zwartkops again later in June. I can’t wait for another go, this time for a podium result.