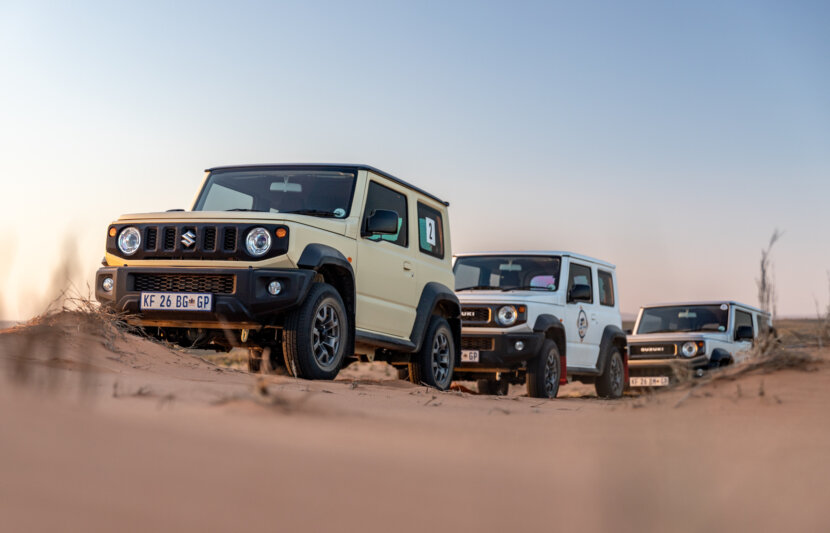 Suzuki’s Jimny is something of a giant killer when it comes to its off-road abilities. The Jimny’s relatively diminutive dimensions in comparison to other hardcore 4x4s yield cliché phrases such as “David vs Goliath” being thrown about in car reviews across the globe.

But what does that mean, exactly? To help answer this question, Suzuki invited me on a bit of an overlanding trip through some of the highlights of South Africa’s Northern Cape.

The Jimny isn’t really considered an option for most overlanders (ie people who do long trips involving unmapped roads on their way to destinations off the beaten track). Google ‘overlanding vehicle’ and the first set of results will be a large, heavily modified SUV or bakkie that looks capable of a moon landing and can cost nearly as much.

What became clear over four days was that the Jimny is an ideal vehicle for a bit of adventure. Granted, it won’t carry a family of four for a long trip, but with just two of us, it was the perfect companion.

We started day 1 at Upington Airport, heading towards the small village of Pella with a stop at the Immaculate Conception Cathedral built by two priests in the early 1900s. Thereafter, we hit singletrack trails over Charlie’s Pass, a rocky, barren mountainous terrain with striking visual contrasts. Surrounded by massive sheer cliff faces we traversed the section with ease; the little 1.5-litre motor boasts plenty of torque using the low range transfer box to keep the vehicle crawling up and over the terrain.

Continuing into the wilderness, we made a beeline for the Orange River which separates South Africa and Namibia. Arriving on its banks was magical. As we looked over onto the dark mountains of our neighbours, the lush green belt that snakes along this watery lifeline was a stark contrast.

A dry tributary riverbed provided a sheltered campsite for the night. With the fire lit and a welcome local brew in hand, we spoke long into the night about the wonderful country in which we live.

We rose with the sun for day 2. With a pot of coffee on the fire, tour operator JJ du Toit of African Expeditions outlined our roadmap to our overnight spot nearby Kleinzee on the West Coast.

We headed south towards Aggeneys but not before a stop at the farm renowned for a majority of  South Africa’s date production nestled in the hills alongside the Orange River. The lush green date forest and a sprinkling of grape vines look like an oasis in what is otherwise a barren landscape. Fuelled with date muffins, we joined the N14 and cruised through to Springbok, then on through Spektakel Pass, named by Simon van der Stel purportedly at the sight of the Namaqualand flowers in full bloom. Soon we returned to the road less travelled.

Our overnight stop on day 3 was the wonderful De Houthoop guest house on a working sheep farm just outside Kleinzee. A quick stop to drop off our luggage and grab a bite and then we were off to the beach to hunt for a few shipwrecks along the route from Hondeklipbaai. The most impressive was the Piratiny, which ran aground in 1943. Rumour has it the ship was hit by a German U boat – although no one on board, all of whom survived, said as much. Its cargo, largely textiles, was salvaged by local residents who all turned up at church the following Sunday wearing a specific shade of green.

The Jimny made exceptionally light work of the sandy beaches, despite some rather thick sections. Its main advantage in this scenario over many 4x4s is its weight, or lack thereof. The Suzuki just floats over the soft surface. This was highlighted when we found our way into a bowl-shaped dune back at Die Houthoop farm. We spent hours criss-crossing the bowl, finding more and more challenging uphill routes to test the Jimny’s prowess. Nothing proved too difficult, though.

Day 4 drew our epic adventure to a close but not before taking the long road back to Upington, via the Namaqualand National Park. The route home showed the Jimny’s ability to tackle lengthier, high-speed gravel roads rather than the slow, low-range terrain to which we’d become accustomed.

Sitting on the plane as we gained altitude out of Upington, we had a bird’s eye view of our route. It really drove home the fact that I need to explore more of our country. And there are few vehicles better suited to the task than Suzuki’s Jimny.