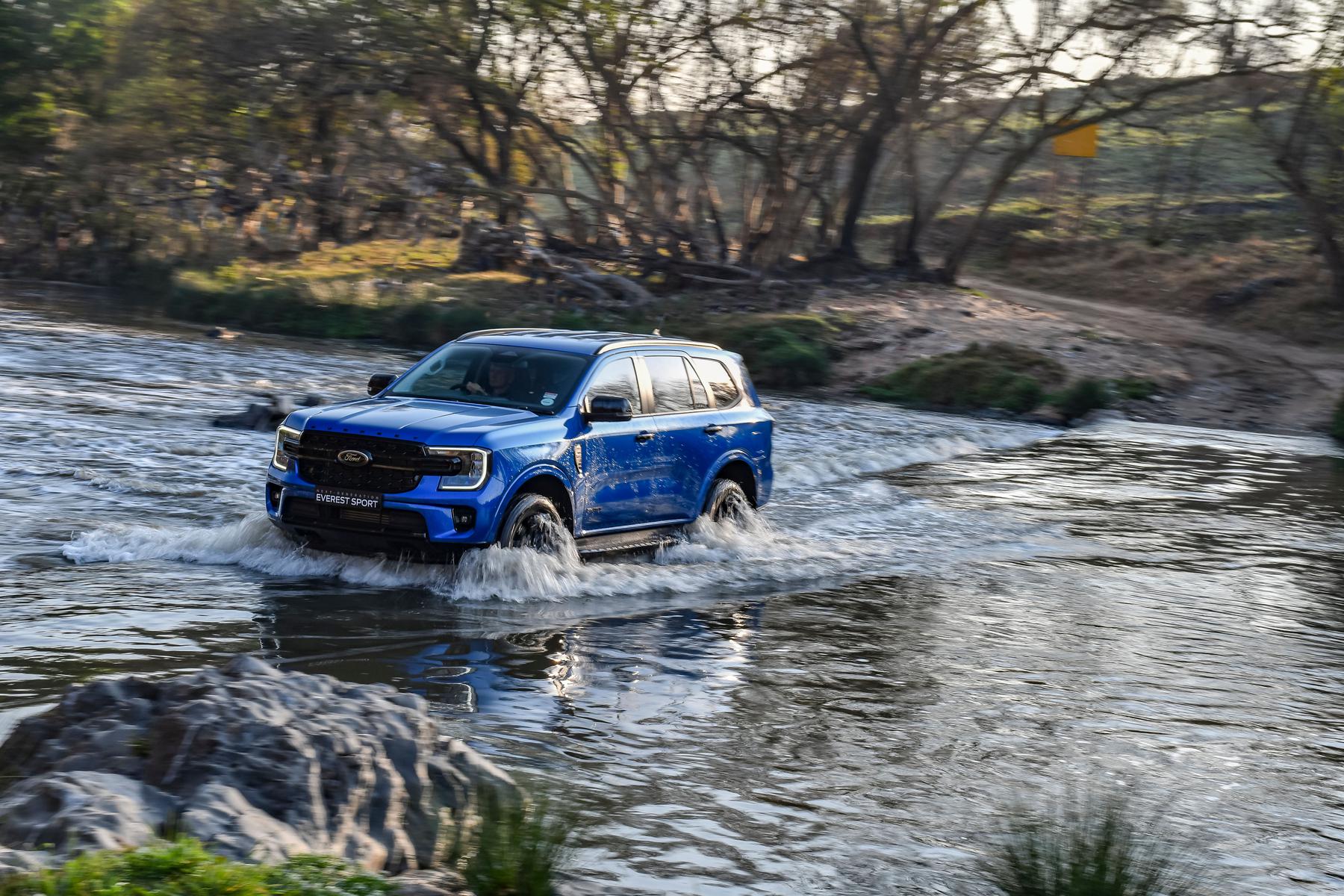 The all new Ford Everest is big step up for the brand and what’s apparent from the outset is that the Everest has matured and evolved into a properly premium product.

Engines on offer are the 154 kW / 500 Nm from a twin turbo 2.0l diesel in the Sport and 184 kW /600 Nm from the 3l V6 turbo diesel in the Platinum. This V6 motor is so smooth you would be forgiven for thinking it’s a petrol derivative. It is outstanding, aided and abetted in int duties by the 10 speed auto box that shifts smooth as silk. The combination is about as good as you can ask for.

The power means that the Everest Platinum bounds about the roads like a 2.5 ton gazelle (it weighs just under that, but only just). If you push the pedal to the metal there is that brief intake of air, primarily from yourself and then it launches itself off with gay abandon and it doesn’t stop shoving through each of the 10 gears. There is no violence but rather a sense of understated urgency with which you’ll get romping along rather rapidly in no time at all.

Ford have thrown the kitchen sink at the Everest when it comes to 4×4 capability, all accessible with the touch of a button. The control system is simple and run from a rotary dial with push buttons inside it – you select what type of 4×4 you want, what mode you want it to operate it in and watch as the car picks the transfer case it wants to use, adjusts traction controls and sets off. If it made coffee at the same time I’d not be surprised. Some more customisable options are available, should you so wish, like locking the rear diff via the infotainment system. It is then a case of impressive simplicity as the Everest bounds up and over whatever obstacle you present it with.

Inside the cabin, the new digital displays are orders of magnitude better than anything before it. The integration into the cabin is seamless and the centre display is massive. They say 12” portrait. Both Sport and Platinum get the same thing – but Platinum adds a 12” digital dashboard (Sport gets 10”) and also 3D camera technology for when you are off roading and are mildly curious as to what it is you’ve either just driven over or are about to drive over.

The Platinum also gets vented seats for heating and cooling. In 38C outside temps, vented seats keep your shirt dry and I have to admit I am a big fan of them. Tick. Take my money. Plus the second row is heated too to keep the toddlers warm and cosy.

There is a lot more. Really. In addition to everything mentioned, the Platinum has a 12 speaker (as opposed to 8) B&O sound system. The explosion of high end name brands into the car space has become a thing and cranking this system to the max (I had a compliant co-driver) revealed a surprisingly balanced and neutral sound. It’s accurate and won’t fatigue you over time and I enjoyed the well-controlled bass, well positioned vocals.

The Platinum also has powered fold down jump seats (the 3rd row) whereas the Sport is manual (and very easy to use I might add). Cruise control increases to the adaptive type in the Platinum and initial impressions are that it works well with a larger than usual range adjustment. I didn’t get to test the auto park function which it also has (yup, it will parallel and perpendicular park itself) – and to finish it off the gear shifter on the Platinum looks more at home than the one on the Sport, which would be about my only niggle on the interior of the Sport.

We also go from 20 to 21 inches on the rims between the two but Platinum adds tyre pressure monitoring. No sunroof on the Platinum, but instead a panoramic moonroof. I kid you not.

It’s a fair old list of what comes on the car. What’s more important though is that at these price points Everest has now really grown into its name. The interior finishes are significantly improved. The new engine is a stunner. Ford say 80% of the car is all new and it shows.

I want to touch on Ford Pass. We didn’t play with the app on launch but you can remote start the car from it, but that certainly isn’t the end of it. I spoke to Ford people at some length about the direction that Ford is taking in this regard. The imbedded modem in the car means the comms path is car cloud mobile. What this means is that the future is going to start including things like…

Maintenance. Your car will tell you (and the cloud) it needs a service. The cloud can then tell you and the service centre all about it. Imagine if you can, that something goes wrong and you get a warning light on your car. Inconceivable of course but theoretically, work with me here. You call the cloud. The cloud calls your car. Your car reports to the cloud, which then tells you what’s wrong, the degree of severity and what needs to happen and books you then and there.

Then when you get to sort it out, you know the cost, the time and any parts needed will already be there waiting for you.

Things like this are made possible by the tech. It is moving us to a level that is going to change and make better the way we interface as a customer between our cars and those that look after them. Already, as in now, with the Everest, the benefits will be felt and it will be exciting to watch it unfold. And this is just the start.

So where does all of this leave us?

Everest has taken aim. It is a compelling vehicle in every aspect. The price is, as it always will be, a deciding factor but any reservations about the Everest being able to justify this should be discarded. Yes, it is a big step up. But the step up in the vehicle is even bigger.