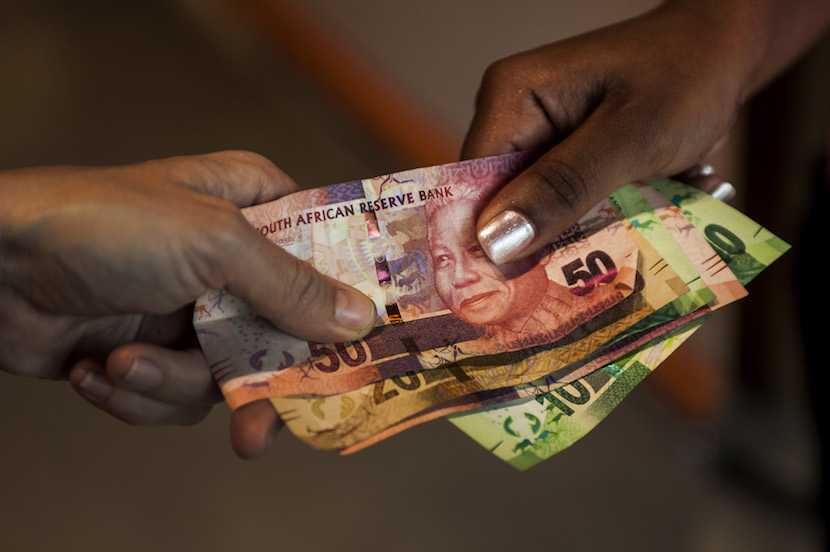 Globally, the economic recession and impact of the coronavirus pandemic is expected to be highly uneven. In South Africa, the impact of Covid-19 has resulted in steep economic declines and increased public finance expenditure.

Amid a global contraction since the 1930s, National Treasury’s focus is on securing economic recovery post-Covid-19.  The 2020 Medium Term Budget Policy Statement (MTBPS) has prioritised economic recovery and fiscal consolidation in the medium-term.

To this end, government says it is committed to closing the budget deficit and stabilising the national debt‐to‐GDP ratio. A combination of expenditure and revenue measures will narrow the main budget deficit from 14.6% of GDP in 2020/21 to 7.3% by 2023/24. Gross national debt is projected to stabilise at 95.3% of GDP by 2025/26.

National Treasury says to achieve these targets will see large reductions in non‐interest spending over the next three years, with the majority applied to the wage bill.

Learning and culture has been allocated receives the largest funding allocation, while economic development and community development are the fastest‐growing functions

The social compact agreed to between government, business, labour and civil society will prioritise short‐term measures to support the economy. Crucial structural economic reforms will also form part of this.

Economic growth: expected to contract by 7.8% in 2020 with real growth expected to reach 3.3% in 2021. Growth in the economy is expected to average 2.1% over the three year forecast period.  Weaker than expected growth, continued deterioration in the public finances, and a failure to implement structural reforms have been identified as risk to SA economic growth.

Budget deficit: reduction of wage bill in order to narrow the budget deficit and stabilise debt over the next five years. This will enable public finances to return to a sustainable position.  Consolidated deficit narrows from 15.7% of GDP in 2020/21to 7.3% by 2023/24. Gross national debt is projected to stabilise at 95.3% of GDP by 2025/26.

Tax revenues: forecast to be R312.8bn lower than projected in the 2020 Budget Review.

Less money for civil servants: Mboweni has found R36.5 billion by holding it back from government employees, mainly from a freeze on salary increases. But they still get something. The budget document says: ‘Government proposes growth in the public-service wage bill of 1.8 per cent in the current year and average annual growth of 0.8 per cent over the 2021 MTEF period.’

Full 2020 MTBPS, below – scroll down for quick snapshots

Our little Aloe Ferox has survived! It is recovering!

In South Africa, the high frequency data that we collect suggests that green shoots are emerging. At this stage, it looks like there will be a strong rebound in the next quarter.

“Plummeting household and business income, alongside severe restrictions on movement, led to a spike in job losses, large-scale business closures and a near-complete halt in international goods trade. By June 2020, the number of people in employment had fallen by 2.2 million, leaving South Africa with only 14.1 million workers employed.” 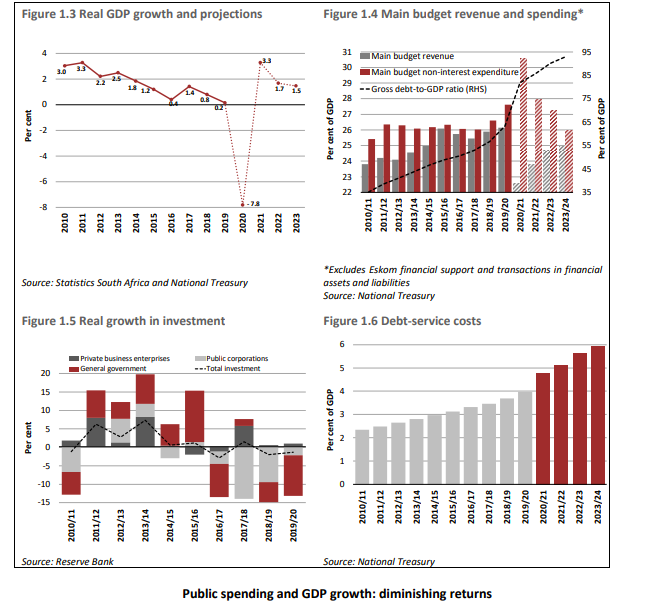 “For many years, South Africa’s macroeconomic policy has been designed to support stable and sustainable growth. Nevertheless, structural weaknesses in the real economy have contributed to persistently poor economic outcomes and reduced long-term potential growth. These weaknesses include declining productivity, falling investment levels, an unreliable and unstable electricity supply, and deteriorating global competitiveness.”

“Since 2008, the real cost of the public-service wage bill has risen by 51 per cent…. the main reason for this growth is an increase in unit costs, rather than headcount. The contributions of hard-working public servants are essential for national development, and government is committed to providing fair and sustainable compensation. But with much state borrowing funding consumption, the wage-setting process has become divorced from economic reality.”

The bond yields of many developing countries have declined more moderately, reflecting comparatively lower demand. Brazil, Turkey and South Africa, however, were exceptions: the increase in their government borrowing costs reflects higher risk perceptions due to deteriorating economic and fiscal metrics 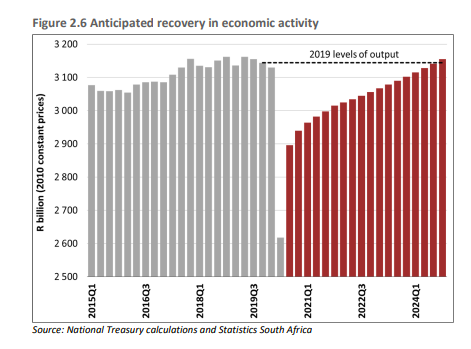 “The main risks to the economic outlook are weaker-than-expected growth, continued deterioration in the public finances and a failure to implement structural reforms. A second wave of COVID-19 infections, accompanied by new restrictions on economic activity, would have significant implications for the outlook. Government’s fiscal position is a risk to growth: higher long-term borrowing costs and risk premiums have started to affect the broader economy.

“In addition, recovery efforts will fail unless structural constraints (including in energy, infrastructure and competitiveness) are urgently addressed. While the reforms required in these areas do not immediately affect growth, they are critical for confidence and investment.

“Globally, there are persistent risks associated with Covid-19 and rapid debt accumulation. While global monetary policy is expected to continue supporting growth and liquidity, financial market sentiment is likely to remain volatile. This implies continued bouts of risk aversion and lower global capital flows to small, open developing countries like South Africa. There is also the possibility of a faster-than-expected global recovery if reopening economies normalise quickly. The development of a safe and effective Covid-19 vaccine would likely improve sentiment, productivity and growth in the short to medium term.” 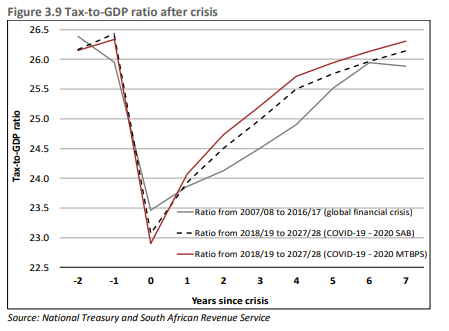 “Additional fiscal pressures from the broader public sector – including state-owned companies, social security funds and municipalities – remain unresolved. The fiscal trajectory is a major source of uncertainty, pushing up borrowing costs for the broader economy. Returning the public finances to a sustainable position requires large adjustments.

“Government spending remains too high for the tax base – and this gap has likely increased as a result of the 2020 recession. Recent tax increases have generated less revenue than expected, and evidence suggests that tax increases can have large negative effects on GDP growth.

“Without a major reduction in public spending, debt will continue to accumulate and interest payments – which already consume 21 cents of every rand of main budget revenue – will crowd out other spending. Debt stabilisation involves difficult decisions, with short-term costs for the economy and the fiscus. To partially offset the effect of the spending adjustment, government has weighted the largest share of reductions to the wage bill, while supporting capital grants and the Infrastructure Fund.”

“Government proposes growth in the public-service wage bill of 1.8 per cent in the current year and average annual growth of 0.8 per cent over the 2021 MTEF period. To achieve these targets, which are essential for fiscal sustainability, government has not implemented the third year of the 2018 wage agreement.

“Furthermore, the Budget Guidelines propose a wage freeze for the next three years to support fiscal consolidation. Additional options to be explored include harmonising the allowances and benefits available to public servants, reconsidering pay progression rules and reviewing occupation-specific dispensations.

“The next round of wage negotiations is due to start soon and work is under way to formulate government’s position. In addition, government is coordinating work relating to developing a comprehensive public-sector remuneration strategy for the medium to long term. This will include public office bearers, state-owned companies, public entities and local government. The strategy will seek to better balance competing interests on the basis of fairness, equity and affordability.”

• A significant decline in compensation, and therefore personal income tax, due to the lockdown.

• A weaker import outlook, which has reduced VAT and customs expectations.