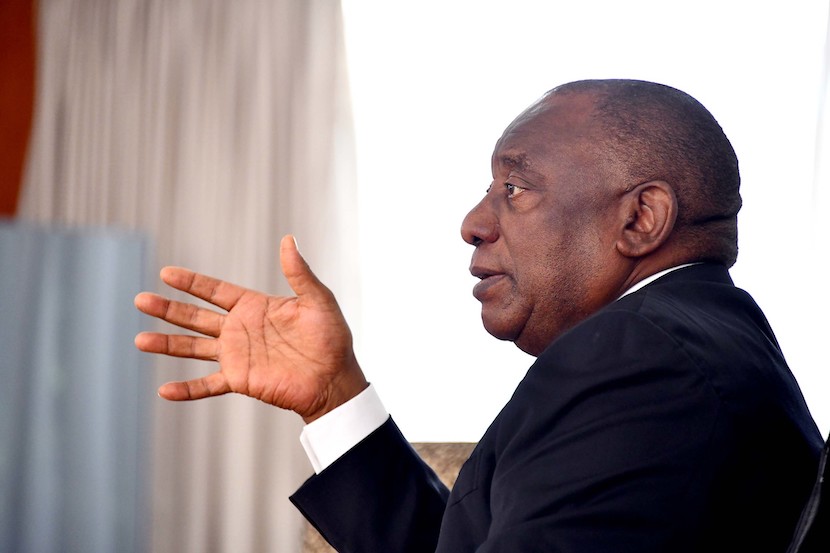 At the virtual World Economic Forum, which opened on 25 January and will end on the 29th, a stern-looking President Cyril Ramaphosa gave a special address regarding what he referred to as ‘vaccine nationalism‘.

“The rich countries of the world went out and acquired large doses of vaccines from the developers and manufacturers, and some countries have even gone beyond and acquired up to four times what their population needs. That was aimed at hoarding these vaccines, and now this is being done to the exclusion of other countries in the world that most need this.”

“Rich countries in the world are holding onto these vaccines and we are saying, release the excess vaccines that you have ordered and hoarded. There is just no need for a country, which perhaps has about 40 million people, goes and acquires 120 million doses or even 160 million doses. And yet the world needs access to those vaccines.”

Ramaphosa said that the vaccine acquisition task team in Africa has been ‘marginally successful’ in securing doses but he urged wealthy countries to release their surplus supply so that the world can combat the virus together. He also said that he does not expect vaccines to be given away but he did make mention of ‘financial assistance’.

According to Reuters, the African Union secured 270 million shots for the continent this month in order to supplement 600 million doses from the Covax vaccine distribution scheme, though it’s still unclear as to when they will arrive. Britain has ordered 367 million doses for its population of over 65 million, while the European Union has secured nearly 2.3 billion doses for its 450 million people.

Read also: Angry SAs speak: If Cyril can’t secure a vaccine, at least give us Ivermectin

Ramaphosa’s pleas have been met with anger and criticism from a community that doesn’t hold back on social media. BizNews readers feel the fault simply lies with Africa and the government’s inability to act. 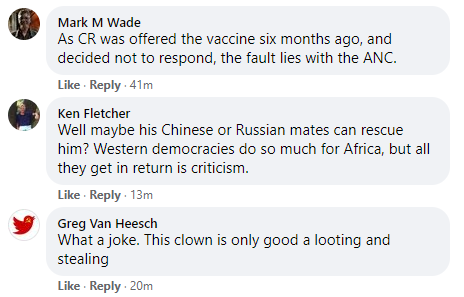 Bruce McDonald says, “Love it when communists cry about the unfairness of the world.”

“Are all these people clamouring for the vaccine brain impaired? We know it is a ‘Plandemic’ for more than 10 years in the making and they, the planners, told us openly in our faces what their plan was. Already we have had reports of people that received this vaccine, had terrible reactions from it and many deaths from it also and still the morons want to be injected with this poison? They couldn’t develop a vaccine against the common cold and now all of a sudden within months they developed one for this man-made, so-called virus?” comments Johan Marneweck. 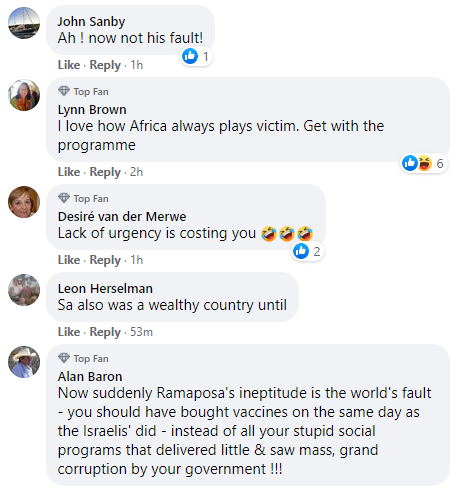 “We condemn corrupt thieving third world nations who are lazy and don’t like the idea of work or have no clue about wealth creation!” writes Fred Perry.

Frans van erk agrees. “President from a communist ANC is allowed to steel billions from the country but democratic countries are criticised to sell their vaccine. When will Mandela’s follower step down and confess his own dirty sins.”

Looking to pass the blame for incompetence again. Could have placed an order months ago but had nothing left after the looting. 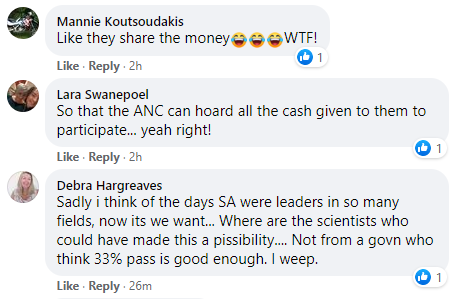 The head of Africa’s wealthiest nation is whining because him and his corruptocrats stole all the money and now can’t afford to pay for a vaccine to protect the people he is suppose to present.

“So that’s the best Squirrel can do is it? All smoke and mirrors to deflect from his hopeless failure and the failure of his thieving and corrupt fellow incompetent cadres. Absolutely no progress in stemming the tsunami of corruption (remember the election promise?). Even Covid money meant for the poor and suffering was misappropriated. Anyone in jail yet? His party have proudly steered SA into junk status and he has the gall to criticise successful countries in the world. Pathetic. The ANCvirus, and the Zumavirus are still with us. Just another strain, that’s all,” says Paining. 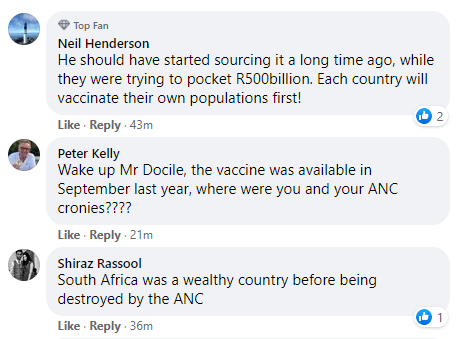