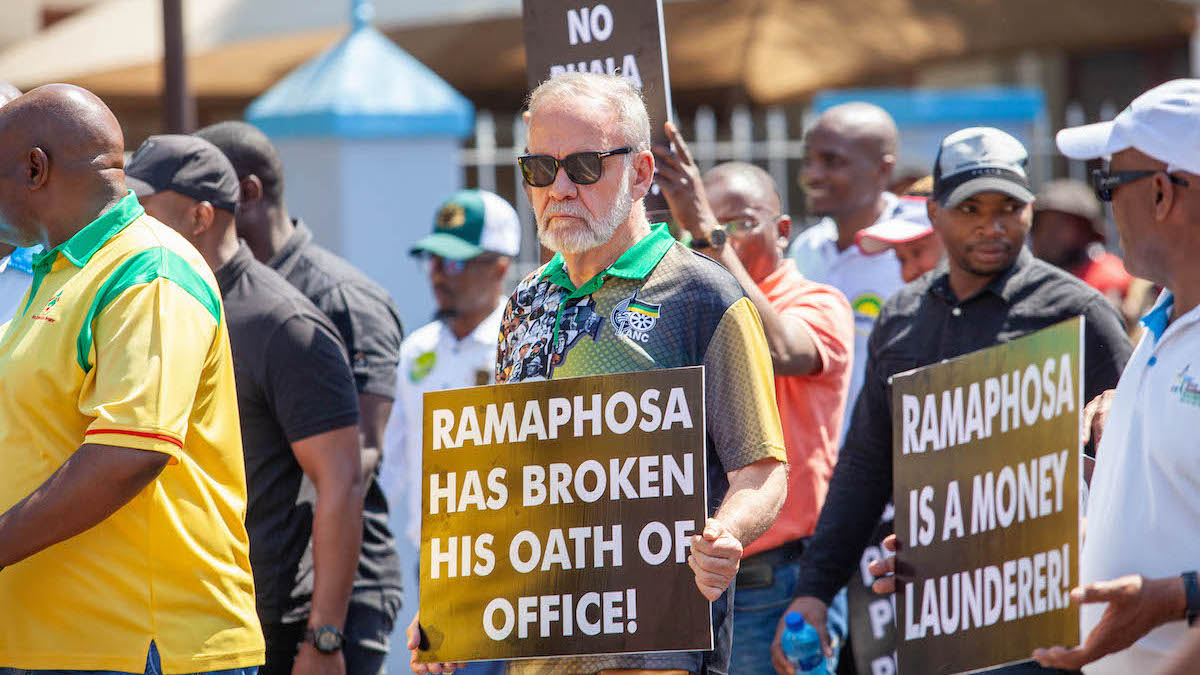 Cyril Ramaphosa certainly has his critics in the ANC, and if you’re sitting in opposition benches in Parliament, you’re asking yourself whether there are enough of them ahead of Tuesday vote. Last week the ANC National Executive Committee – the highest decision making structure of the party between conferences – gave its marching orders to its caucus in the National Assembly to quash the report. The ANC holds 230 out of 400 (about 57%) of the seats in the house. The independent panel report was just the first in a three-step process that unfolds when seeking to impeach a sitting head of state. The panel’s report has come under the hammer from several quarters including the president himself who’s challenging it in the Constitutional Court. The next step is for the house to vote on whether or not to adopt the findings of the panel which found the president has a case to answer to and “may have” violated the constitution and his oath of office. Tuesday’s vote before a full physical sitting of Parliament requires a simple majority, or 50% plus one to pass. The opposition – which represents 170 votes – isn’t exactly united as a voting bloc making a tall order, to get to the magic number of 201 votes, all the more arduous. The president’s main, and only rival on the ballot at the ANC’s national conference starting Friday, is former health minister Dr Zweli Mkhize. A man still associated with his own Digital Vibes scandal. He’s certainly been vocal about how the NEC is said to have bullied anyone in the meeting who believes Ramaphosa should face the impeachment inquiry. He’s also not a lone voice, there are other MPs like Nkosazana Dlamini Zuma, Lindiwe Sisulu, and former North West Premier Supra Mahumapelo, who’ve publicly rebuked Ramaphosa. But these individuals are all part of a cast of characters driven by their own self interest and leadership aspirations. They also enjoy support within the so-called Radical Economic Transformation faction of the ANC. It’s ironic, I suppose, that South Africans who feel that for accountability to find full expression by means of an impeachment inquiry, where Ramaphosa could clear his name, hinges on people with their own skeletons. But such is politics. – Michael Appel

(Bloomberg) — South African lawmakers will decide Tuesday whether to institute impeachment proceedings against President Cyril Ramaphosa, three days before the governing party meets to consider re-electing him as its leader.

Ramaphosa’s political future was cast into doubt on Nov. 30, when an independent panel found he may have violated the constitution because of the way he handled the theft of at least $580,000 (+-R10m) that had been stashed in a sofa at his game farm. The 400-member National Assembly will vote on whether to adopt the findings. If it does, legislators will establish a panel to look into whether there are grounds for his dismissal.

The African National Congress has instructed its 230 legislators to quash the report, but some within the party oppose Ramaphosa and may vote alongside opposition parties — most of which have said they favor its adoption.

An open ballot will serve as a deterrent to those considering breaking ranks. While the report requires a simple majority to pass, impeaching the president would require the backing of two-thirds of lawmakers.

Ramaphosa is widely expected to win a second term as ANC leader at its Dec. 16-20 national conference after receiving the most nominations for the post, and his status as the front-runner would be re-enhanced should lawmakers reject the report. The party has held power since the racist system of apartheid ended in 1994, and whoever is chosen as its leader will also be its presidential candidate in a 2024 general election.

Read: Opposition Puts Ramaphosa at Mercy of His Party in Crucial Vote

The 70-year-old president, who has consistently denied any wrongdoing, appeared nonplussed about the impending parliamentary vote and potential consequences while attending an ANC event in Cape Town at the weekend.

“There’s not much to it,” he told reporters. “Relax. There’s no issue, there’s no crisis.”

Tuesday’s sitting will be held in Cape Town’s City Hall because the National Assembly chambers were gutted by a fire in January and have yet to be repaired. A debate on the report is scheduled to begin at 2 p.m. local time and will be voted on once it’s concluded, with the count likely to take several hours.

The ANC’s parliamentary caucus will meet on Tuesday morning ahead of the debate. Pemmy Majodina, the party’s chief whip, declined to comment.

Forty-two ANC lawmakers will vote in favor of approving the report if the balloting is open, and 93 if Speaker Nosiviwe Mapisa-Nqakula reverses a previous ruling to reject a secret ballot, Cape Town-based website News24 reported, citing Mervyn Dirks, one of the party’s legislators and a Ramaphosa adversary.

The African Transformation Movement, which has two seats in parliament, is considering court action to force the speaker to agree to a secret vote, its leader Vuyo Zungula said by text message on Tuesday.

The president’s troubles began in June, when Arthur Fraser, the nation’s former chief spy, laid charges against him, alleging that he tried to cover up the theft of at least $4 million from his farm in the northern Limpopo province. The source and accuracy of that information remains unclear. Opposition parties climbed in, questioning whether the president had broken foreign-exchange and tax rules.

Parliament appointed an advisory panel headed by Sandile Ngcobo, a former chief justice, to investigate the matter. It disputed Ramaphosa’s assertions that the stolen cash came from the sale of 20 buffalo to a Sudanese businessman, and that his farm manager had decided to hide it in a couch because he thought that was the safest place to keep it.

While Ramaphosa initially contemplated resigning, he later backtracked and said he will challenge the panel’s findings in the Constitutional Court on the basis that they are legally flawed. The ATM has asked the court to dismiss the application, Zungula said.

Ramaphosa won’t necessarily be off the hook if he escapes parliamentary censure. The police are also investigating the matter, and under ANC rules he’ll have resign if he’s criminally charged.

A former labor-union leader and one of the wealthiest Black South Africans, Ramaphosa succeeded Jacob Zuma in early 2018 and pledged to tackle the corruption and economic malaise that set in during his predecessor’s nine-year rule.

— With assistance from S’thembile Cele.