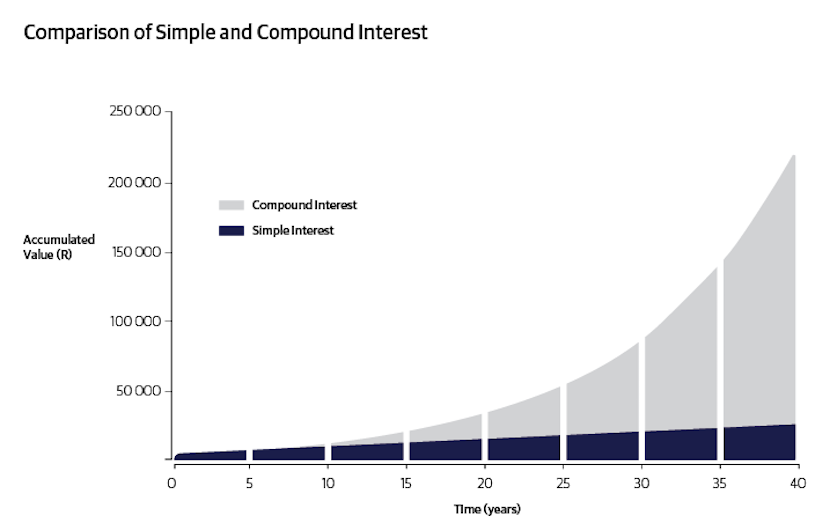 *This article is brought to you by Liberty Corporate

One of the best known and frequently used quotes on the power of compound interest is attributed to the world-renowned physicist and scientist Albert Einstein. He is believed to have said: “Compound interest is the eighth wonder of the world. He who understands it, earns it. He who doesn’t, pays it.”

Regardless of whether Einstein actually uttered these exact words, the essence of this statement, is immensely powerful and cannot be disputed, says Mathias Sithole, head of public sector and corporate consulting at Liberty Corporate.

The world’s most successful investor and wealth creator, Warren Buffet, seems to agree, as more often than not he has been quoted as follows: “My wealth has come from a combination of living in America, some lucky genes, and compound interest.”

The graph below shows the growth of a R5 000 investment over a period of 40 years at 10% per annum under the compound and simple interest scenarios.

“For example, if an individual contributes R5 000 at the beginning of every year for a period of 40 years, he/she would have invested R200 000 over this period. Again assuming 10% per annum compound interest, this investment would amount to approximately R2,4 million after 40 years. Interestingly, the contributions made during the initial ten years account for almost 65% of the total investment amount at the end. This clearly demonstrates the power of compound interest over long periods of time and shows why it’s important to start saving as early as possible.”

Having said this, be warned that compound interest can be a double-edged sword in some circumstances, Sithole cautions.

“It’s particularly pertinent when you have to make repayments on some sort of loan, such as repaying the monthly mortgage instalment on a house, the repayments on financing your motor vehicle, credit card debt or paying off student loans. Say, for example, you have taken out a loan for R5 000: after five years, the loan repayable would be R8 053 and after 40 years a whopping R226 296! The point is that you spend a lot of your future income for the benefit of owning something now, when you buy it through a loan, due to compound interest.

“In these cases, you are the one paying the interest on the loan as well as interest on the interest that has accrued. This situation is particularly severe for consumers in times of high interest rates. So the moral of the story is to use compound interest in your favour when investing, but minimise your debt as far as possible by preventing it from working against you,” Sithole stresses.