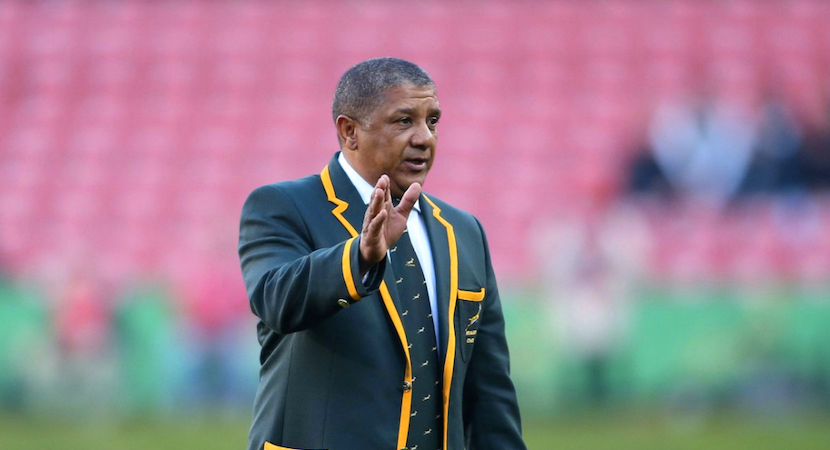 Finally, SA Rugby has confirmed the latest worst-kept secret – Allister Coetzee has been given a reprieve and coaches the Springboks…for who knows how long? To cut Coetzee some slack, he did have inadequate assistance last season from the inexperienced Mzwandile Stick, and the inclusion of Cheetahs head coach Franco Smith in the coaching staff can only improve matters. Stick is relegated to assistant coach of the Junior Springboks, where he can start learning his trade instead of being thrown unfairly into the deep end. A defence coach hasn’t been named, apparently because contractual issues still need to be sorted out. Rapport newspaper said on Sunday that Italy’s defence coach, former Bok Brendan Venter, would get the job. Given that he’s only recently taken up the position with Italy, it’s not a stretch to speculate that he’s the one whose contractual issues need to be sorted out. – David O’Sullivan

The Executive Council of SA Rugby on Monday reaffirmed its support for Springbok coach, Allister Coetzee, as it announced the coaching and management structure for eight national teams, involving 46 individuals.

Former Springbok Franco Smith was confirmed as a new member of the Springbok coaching team among a number of adjustments. A major new defensive coach will be confirmed once contractual details are finalised.

“Our coaching review was focused on the Springboks and we identified two areas to give Allister Coetzee additional support at the head of our most prized national asset,” said SA Rugby president, Mark Alexander.

“Franco Smith will continue the work he began with the backs and attack at the end of last year while we are very excited about the new defensive coach we have identified to address matters raised during the review. We expect to be able to confirm that appointment shortly.

“I would like to apologise to our supporters for the delay in this announcement, but assure them that it was necessitated not by a lack of clarity of intent, but by the need to first resolve all contractual issues. The outcomes we now have were agreed with Allister some weeks ago.”

Meanwhile, Johan Ackermann, will continue as coach of the SA ‘A’ team for the two match-tour of a French Barbarians team in June while Chean Roux, who won the Varsity Cup three times as coach of Maties, has been appointed as head coach of the Junior Springbok team, after a four-year stint with the Springboks.

Roux will be assisted by Mzwandile Stick, who will take up the role as backline coach with the Junior Springboks. Stick was also earmarked to become assistant coach of the Springbok Sevens team but he has requested to remain in XV-a-side coaching and given further opportunities in that format.

Alexander thanked Franco Smith for answering the call of the Springboks. He explained that Smith would continue as head coach of the Cheetahs in Vodacom Super Rugby (in 2017, 2018 and 2019) but be otherwise fully engaged on Springbok duty.

“Last year was an incredibly tough one for the Springboks and all of the rugby community suffered,” said Alexander.

“We weighed many factors in the review process but we believe that these changes will strengthen the Springbok management hand.

Allister Coetzee has won the first round. Stays on as Bok coach. Good luck to him. Public want results. Need to turn things around quickly.

“The new alignment at both a coaching and conditioning level with the franchises will also provide critical support to the national team. That process continued recently with our third coaches’ indaba and another is already scheduled for later in Super Rugby when the coaches will come together for a third time to discuss our on-field approach. The conditioning coaches are also reconvening on the same day.

“I’d like to thank and commend all the Super Rugby coaches once again for buying in to what we want to do and for putting Springbok needs at the forefront of their thinking.”