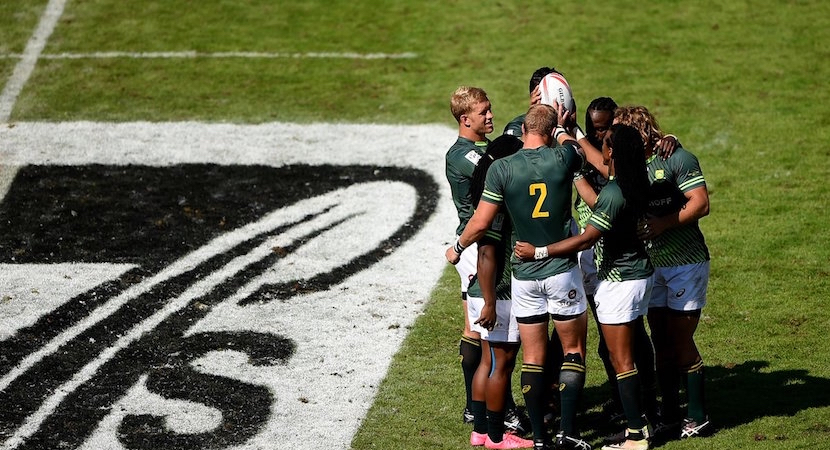 JOHANNESBURG — This time last year, the Blitzboks ended the Australasian leg of the World Sevens Series with two wins from the two tournaments. This season, they finished second each time. It’s a fantastic performance which any of the other teams would have taken gladly. But if you’ve ever met these Blitzboks, you will know that they will feel somewhat deflated by the results. Even if South Africa’s Sevens team was blown away by Australia in Sydney two weeks ago, and the injury-depleted team was bulldozed by the powerful Fijians in the second half in Hamilton this past weekend, the Blitzboks are still the most consistent of all the teams in the competition. Going into the Hamilton leg, South Africa had a slender 2-point lead over New Zealand. Now it’s an 8-point lead. There’ll be some changes ahead of the North American leg of the World Sevens Series next month with players such as Kwagga Smith and Seabelo Senatla leaving for Super Rugby commitments and other players such as Philip Snyman, Ruhan Nel and Justin Geduld returning from injury. All eyes on Las Vegas from 2 March, as the Blitzboks look to defend their title. – David O’Sullivan

The Springbok Sevens team strengthened their lead in the HSBC World Rugby Sevens Series in Hamilton on Sunday with yet another top two finish at the HSBC NZ Sevens.

The Blitzboks were beaten by Fiji in the final, but they now lead the World Series after four tournaments and are eight points clear of New Zealand in second place and fifteen ahead of Fiji in third.

The current World Series champions departed Cape Town three weeks ago in second place, but two consecutive Cup finals has edged them into the 2017/18 series lead, a good reflection on the consistency showed by the squad rocked by injuries over the last two weeks.

They lost their captain, Philip Snyman, and senior player, Ruhan Nel, to injury after the HSBC Sydney Sevens and then Dylan Sage after Day One of the inaugural Hamilton event due to concussion.

They also faced Fiji without the services of the injured Justin Geduld and Rosko Specman, and had to play the final with only ten fit players.

Springbok Sevens coach, Neil Powell, was disappointed in the result of the final, but overall it was a good trip for the team and he is proud of their effort.

“That is sevens for you. We had an opportunity to score and did not, they countered and scored and then got the momentum. One or two moments like that and the game is gone,” the coach explained.

“It was a very good and gutsy performance by the team. We fought until the last minute, I cannot ask for more. We had a tough week, but the guys really stuck to their guns.”

Powell elaborated on their long-term strategy.

“We are also managing our players, as we have a big season in 2018. The decision not to risk Justin and Rosko in the final was because of the bigger picture. They need to be 100% come Las Vegas, as we are losing four players back to fifteens now. Same with Philip and Rohan, who is already doing recovery after being send back from Sydney.”

Powell is not complaining about extending their overall lead either. “If we won both finals we played on tour, that would have been ideal, but we increased our lead and that was important for us.”

Seabelo Senatla, who scored eight tries at the tournament, said the players are pleased with the weekend’s effort, despite the defeat in the final.

“It was tough with only ten players as our bench is important to bring new energy into the team, but we did well under the circumstances and I think we played better than was the case in last weekend’s final in Sydney.”

Few things in sport are as majestic as Seabelo Senatla sprinting for the line, ball in hand. Wish he would stick to 7s as he is wasted in 15-man rugby.

Senatla applauded the consistency in the effort of the team. “Of course you want to reach finals and win them, like we did last year in New Zealand and Australia, but reaching both finals showed some consistency in our effort and that is something that we are also looking to maintain.

Against Fiji, South Africa took an early lead when Kwagga Smith scored, but a Fiji try from the restart levelled scores. Tries by Kyle Brown and Branco du Preez gave South Africa a 17-5 lead at the break. In the second half though, it was all Fiji, who scored three unanswered tries to snatch the NZ Sevens title away from the Blitzboks.

South Africa reached the final by beating Australia 24-5 in the semifinal. Strong defence from the Blitzboks helped them to overturn the result against the Aussies, who beat them in last weekend’s Sydney final.

Earlier on Sunday, South Africa outplayed Scotland 22-0 in the Cup quarterfinals. Geduld contributed with two tries and a conversion and Senatla and Afrika dotted down once.

South Africa were again the most potent team on attack and topped the try-scoring stakes with 27 tries, with Seabelo Senatla bagging eight of those and Specman five. The Blitzboks again scored the most points at the tournament, as they did in Sydney.

The World Series standings after four tournaments are: