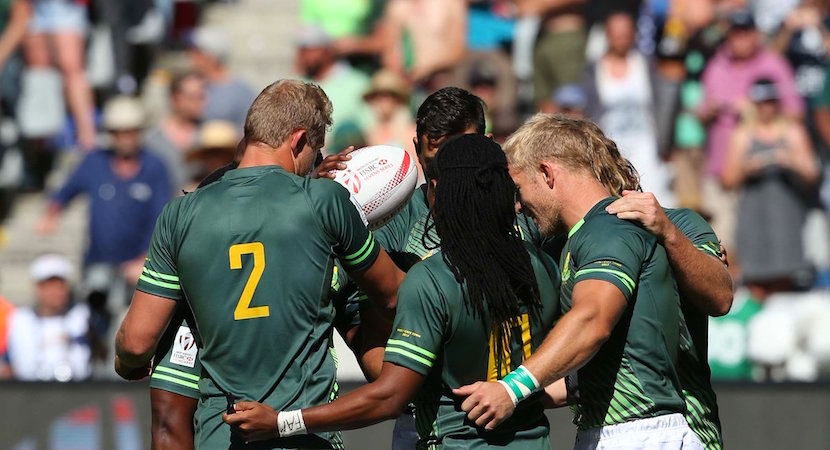 JOHANNESBURG — South Africa go into the final two tournaments of this year’s World Sevens Series just four points behind Fiji after leading the standings for 7 of the 8 tournaments played so far. It’s not that the South Africans have suffered a slump. The Fijians have gone on a winning streak over the past three tournaments. They took top honours in Vancouver, Hong Kong and Singapore while South Africa could only finish 3rd, 3rd and 4th. The Blitzboks have done remarkably well under the circumstances, fielding a second-string side in Hong Kong while the first-choice players were at the Gold Coast Commonwealth Games, and struggling with a string of serious injuries to key players. The South Africans need a boost and the selectors have provided just that by recalling the talisman Seabelo Senatla to the team. The country’s top Sevens try-scorer played in the first four tournaments of the season (scoring 30 tries) before joining the Stormers for Super Rugby duty. Senatla hasn’t commanded a regular place in the Stormers side, and coach Robbie Fleck has agreed to release his player to help the Sevens team. The team is also significantly boosted by the return of a number of stalwarts including veterans Branco du Preez and first-choice captain Philip Snyman. – David O’Sullivan

Regular captain, Philip Snyman, and leading try-scorer, Seabelo Senatla, have been recalled to the Springbok Sevens squad by Neil Powell for the HSBC London Sevens next weekend.

The inclusion of Snyman and Senatla are amongst five changes to the team that finished fourth in Singapore last month. Also returning are stalwarts Branco du Preez, Justin Geduld and Ruhan Nel, who also missed the last trip east.

Selvyn Davids, Kyle Brown and Rosko Specman, who picked up injuries in Singapore, will not travel to the UK, while Muller du Plessis has joined up with the Junior Springboks.

The Blitzboks are currently four points behind Fiji on the overall 2017/18 HSBC World Rugby Sevens Series log and need strong performances at Twickenham and in Paris a week later to retain their overall title.

“It is great to have Seabelo back in the team,” said Powell.

“He is not regarded as one of the deadliest finishers on the circuit for nothing, so it is great to have him available. We want to thank the DHL Stormers management for making him available to us.”

Senatla last played in Hamilton, New Zealand in the fourth tournament of the series before taking up Vodacom Super Rugby duties with the DHL Stormers. He scored 30 tries so far this season, which is still the leading mark for the Blitzboks in 2017/18.

Powell was also pleased to call on the services of Snyman, Geduld, Du Preez and Nel: “We managed the workload of some players as the last two tournaments will be crucial for us in retaining our World Series crown.

“To have experienced players like them coming back at this stage of the series is invaluable, especially as they will be fresh and eager to deliver their best performances.”

The Blitzbok squad for the HSBC London Sevens are: