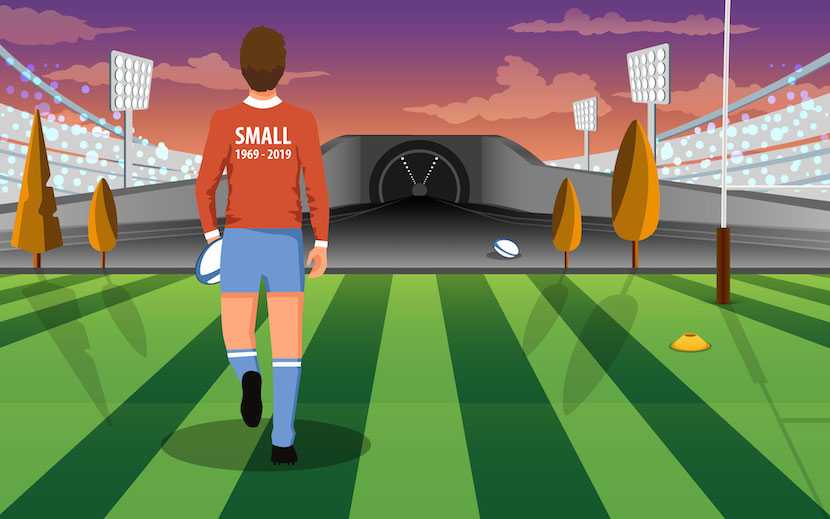 He had a hard-fought reputation as the Bad Boy of Springbok rugby, but beneath that tough shell, James Small was a gentle, vulnerable man who lived a life less ordinary.

On a warm day in the middle of March, probably around the Ides of March, I was walking past The Cow Artworks photographic gallery in fourth avenue in Parkhurst, Johannesburg, when I heard a gruff voice call my name.

It was James Small. It could only be James. His voice was unmistakable – throaty and powerful. He was sitting at a table outside the gallery, a coffee in front of him, his phone at his ear. He put his hand up, asking me to stop. He told the person on the other side of the line he would call them back. He stood up, grabbed my hand and then pulled me into a hug.

“I’m so sorry to hear about your brother,” he said.

My brother, Barry, had died a few days before, succumbing to the burns sustained in a freak car accident. I was in a no-man’s land of grief, confused and broken. Both my brothers had died within two years of each other. Both were 46. I was 49 then. James would have been 47. We talked for a little while about life and the fickleness of it all, about making sure we made the most of what time we had left.

James wished me a long life, checked I still had his number, told me to call him if I needed anything and told me he would see me at the Pirates Sports Club soon.

That was the James Small I got to know as we both got older. I was not a travelling sportswriter when he was at his peak, when he made the headlines for the best and daftest of reasons. He was a box-office superstar, the Springbok they could not put in a category. So, they called him a bad boy, the Eric Cantona of Rugby. The latter he regarded as a platitude.

In Winter Colours, Donald McRae wrote that during an interview in Cardiff in 1996, Small told him he took being compared to Cantona as “my biggest-ever compliment”. He pulled a folded piece of paper out of his wallet and read the words aloud to McRae: “To achieve happiness, sometimes you have to go through the worst depths of despair. Genius is about digging yourself out of the hole you have fallen, or been pushed, into. Failure makes you succeed.”

That was James Small. He was all rock ’n roll but with a vulnerability. He was hard and gentle. He was strong and sometimes troubled. In 2001, after his playing career had wound down in 1999, life came at him with its weirdness and hardness. He tried to take his own life.

As he hid from the world at his mother’s place, he got a phone call from Madiba, asking after him, telling him that as a hero of 1995 he still had so much to give. For James the vulnerable, that call was a lifesaver.

For as much as Chester Williams was the face on the advertisements for the 1995 Rugby World Cup, Small was the man who embodied the “One Team, One Country” mantra the South African Rugby Football Union CE Ed Griffiths had dreamed up.

On one of the Springboks’ visits to townships in the build-up to the World Cup, Small was embraced by a 60-ish gogo as he got off the bus. He responded by dancing with her across the parking lot as the locals cheered and swooned.

I watched James Small take on Jonah Lomu at the 1995 Rugby World Cup final at Pirates. With a name like his he was, he told McRae, always destined to “face a guy as huge as him”. He remembered Madiba telling him he had a big job to do when he greeted him in the line-ups before the match.

On his way to Ellis Park that June afternoon, Small had listened to Massive Attack’s “Hymn of the Big Wheel” on his Walkman. He was the big wheel for South Africa on that glorious day. He gave South Africa the 1995 World Cup, gave the country a reason to hope and believe.

Pirates was where I watched James Small the superstar play, and it was where I would drink with James Small the former Springbok. He coached at Pirates for a spell and we would have a natter over beers (for me) and brandy and cokes (for James). He had stories to tell. He had opinions. He was feisty and fun and full of life.

When Duif du Toit, the legendary sports photographer died in 2015, we made our way to Pirates for a small wake. James was at the bar. Duif had shot him many times down the years, but he had not known he had died. He sighed when we told him, bought a round and we toasted Duif’s life, again and again, and again. It was a long afternoon.

On Wednesday, I was sitting at Giles when the news came through that James had died. It felt surreal. Smiley, the barman, said James had been there last week. My mate, David O’Sullivan, of Kaya FM, messaged to say he had been having beers with him last Thursday. Steven Jack, the former South African Test player, was with them both and said James had never looked happier.

James Small was just 50 when he died. He lived a life less ordinary. He made a country hope when it needed hope, and he made me hope when I needed hope.