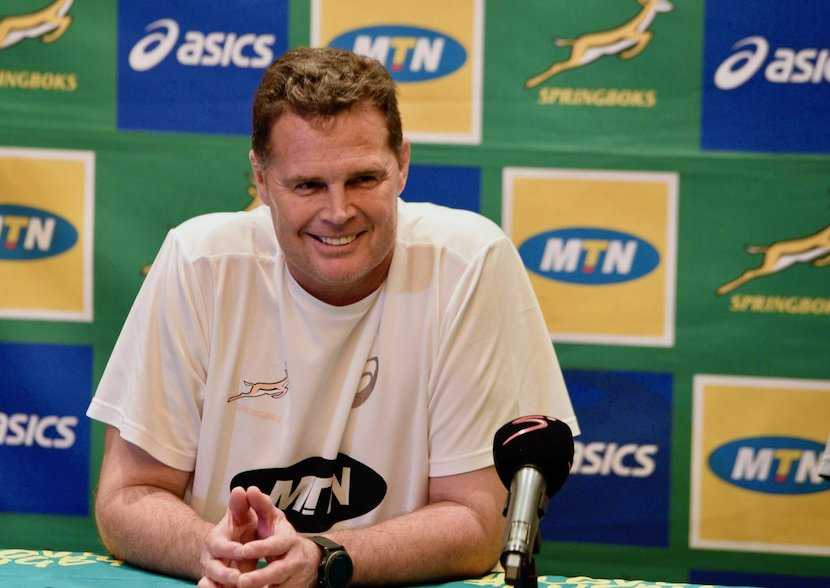 Springbok coach Rassie Erasmus is known for his honesty in his media interviews. While he can give mundane, generic answers on occasion, in his post-match interview after the win over Italy he was refreshingly candid in bemoaning the Springboks’ “terrible” lack of discipline in the first 20 minutes and assessing his team’s performance as “not World Cup-winning standard yet”. Nevertheless the team came close to a second successive 50-pointer at the Rugby World Cup, thumping Italy 49-3. Erasmus says the team is in “playoff-mode”, an expression he used in the build-up to the Italy match. However with this win, the Springboks can surely consider their quarterfinal berth booked. To unseat them from second place overall in Pool B, Italy would have to secure a bonus point against New Zealand while South Africa would have to lose to Canada without a bonus point. Both scenarios are as unlikely as a French referee spotting a skew lineout throw. The Springboks might be sweating on the ankle injury that Player-of-the-Match Cheslin Kolbe suffered near the end of the game. Kolbe says it’s “just a little twist, but I should be OK”. Kolbe, like Bongi Mbonambi, is in the form of his life and has proved to be a match-winner for South Africa. Erasmus can afford to rest his star winger for the Boks’ final Pool B match against Canada on Tuesday, but he’ll want Kolbe fit again for the quarterfinals in two weeks’ time. – David O’Sullivan

The Springboks received high praise from Rassie Erasmus, South Africa’s director of rugby, for their physicality after bulldozing to a seven-tries-to-nil, 49-3, victory over Italy to move closer to a Rugby World Cup play-off berth.

Erasmus admitted the performance was far from perfect, but its red-hot core of sustained power and aggression delighted the coaching team.

“We felt in the previous five or six Tests this year it hadn’t been really consistent but I think in this Test match our physicality – which is one of our strengths – was there consistently throughout the game and I am really proud about that,” said Erasmus.

“Tactically and technically there were definitely some mistakes and errors but I think the way the guys pitched physically was what we wanted to get out of this game.

“I think if we want to go all the way that’s something that we need in our game.”

Cheslin Kolbe (2), Makazole Mapimpi, Bongi Mbonambi, Lukhanyo Am, RG Snyman and Malcolm Marx all scored tries while Handré Pollard kicked six out of nine attempts at goal to take his Test tally through the 400-point mark.

It means the Boks have scored 17 tries in their three Rugby World Cup matches to date – something which had pleased Erasmus, although he conceded that there was room for improvement.

“We definitely have to get better on the attacking side,” he said.

“I’m not sure how many tries we scored tonight but we enjoyed the way we scored them. We have a certain style of play and a certain type of player; we have played to our strengths.

“We know that the way we performed tonight is probably good enough to get us through to the quarterfinals.

“We know we have to have some improvements on attack, definitely, to progress to semi-finals and finals but that’s not the only area we have to improve.

“I wouldn’t single out attack as one of the big worries because we’re currently scoring tries and are right up there with New Zealand and the other teams scoring tries in the difficult conditions and humid weather. We’re pretty happy with the amount of points we’re putting on the scoreboard.”

Springbok captain Siya Kolisi was also happy with the progress that had been made.

“We definitely stepped up a lot today from the first minute,” Kolisi said.

“From the scrums as well. When you see a guy like Beast (Tendai Mtawarira) so keen to scrum every penalty and how crazy he goes it really inspires you – and that’s all the coach asked us for – intensity and work rate and we did well in that.”

Meanwhile the first indications were positive in terms of injuries. Kolbe left the field in the final two minutes with an ankle injury, but it was not thought serious.

“His ankle’s fine; he rolled it a little bit,” said Erasmus. “He played a wonderful game both on attack and defence – aerially – he was just fantastic.

“I think at this stage he must be one of the players in the world with Sevu Reece and Damian McKenzie, those kind of players who have just got x-factor and can do something out of nothing. It’s wonderful to have him in our team.”

The Springboks complete their Pool B programme against Canada in Kobe on Tuesday (kick-off 12h15 SA time).