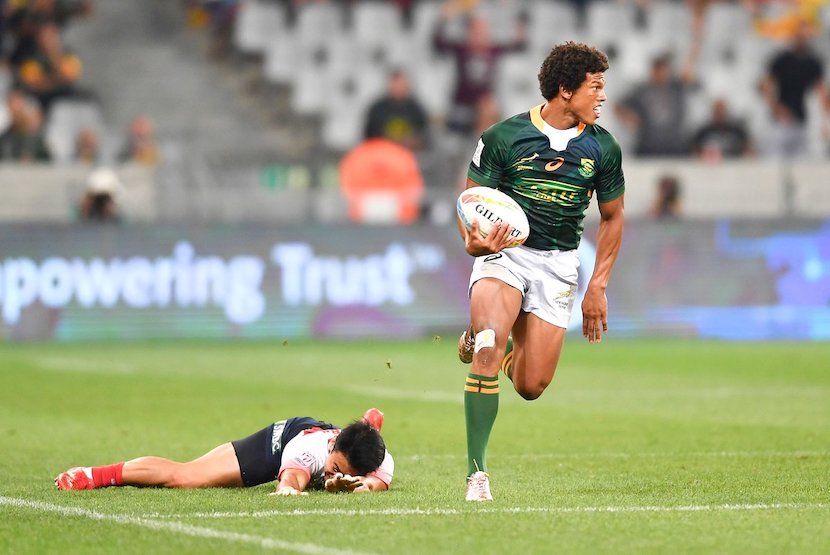 There was a time when Blitzbok coach Neil Powell had a number of captains in his squad. Those were the days when Kyle Brown, Philip Snyman and Shakes Soyizwapi were all playing together. But with the retirement of Brown and Snyman and Soyizwapi’s absence due to injury, there is something of a void in the squad when it comes to a leader on the field. Powell’s decision to give Stedman Gans the captain’s armband is an interesting one. Gans wasn’t even in the Blitzbok squad that won the Dubai Sevens and were losing finalists in Cape Town. He has only played 18 tournaments, making him the 5th least experienced player in the 13-man squad. But he is part of the Blitzbok leadership squad and is no stranger to captaining a team having led the powerful Academy squad which triumphed in Dubai. Powell isn’t a gambler, but he has an uncanny knack for knowing when the time is ripe for a player to be given an opportunity. The South African squad that will play in the New Zealand and Australian legs of the World Sevens Series shows seven changes. Losing half the squad that did so well in the first two tournaments might sound disastrous, but the abundance of talent available in Sevens rugby means that the Blitzboks will field another formidable line-up, particularly with the return of Gans, Branco du Preez, Impi Visser, Muller du Plessis and the crown prince of Blitzboks rugby Cecil Afrika. – David O’Sullivan

Stedman Gans will captain the Springbok Sevens squad to Hamilton and Sydney for the third and fourth tournaments of the HSBC World Rugby Sevens Series, taking over the captaincy armband from the injured Siviwe Soyizwapi.

The Australasian leg of the World Series will be played in Hamilton next weekend (25-26 January) and in Sydney a week later (1-2 February). The Blitzboks are departing for New Zealand on Saturday.

Springbok Sevens coach Neil Powell made seven changes to the squad that won the Emirates Airline Dubai Sevens and were losing finalists at the HSBC Cape Town Sevens late last year, including handing the captaincy to Gans for the first time.

Dylan Sage, Rosko Specman (Vodacom Bulls), Ruhan Nel and Seabelo Senatla (DHL Stormers) have returned to their Vodacom Super Rugby teams, Soyizwapi and Kurt-Lee Arendse were ruled out due to ankle and knee strains respectively and Ryan Oosthuizen is rotated with Werner Kok, who is returning to the squad after his short stint in France at the end of last year.

Angelo Davids, Branco du Preez, Impi Visser, Cecil Afrika, Muller du Plessis and Gans are the new players in the team, while Sako Makata has also recovered from injury and will travel along as the official reserve.

Du Preez (71 tournaments) is the most experienced Blitzbok in the World Series and Afrika the highest points’ scorer (1440 points), and they afford Powell the luxury of well-proven experience alongside the younger crop of Blitzboks.

Powell was mindful of all the changes to the squad, but said it was part of the season’s planning.

“We knew we would be losing the four players to their Vodacom Super Rugby teams after the opening two tournaments and the whole squad are aware of our plans for the remainder of the season,” said Powell.

“Everyone knows when and where they will be given an opportunity and I am confident that this group will do well on this trip.

“It is great to have the likes of Branco, Cecil and Werner back as well as Stedman, Muller and Angelo, all of whom played well during our warm-up tournaments in Germany, Kenya and England last year. Our pool in Hamilton is pretty tough and the new format will punish teams not performing in each match.”

South Africa is in Pool B alongside England, Kenya and Japan, with only the top-placed teams going through to the semi-finals as the quarter-final round has been scrapped.

On the decision to hand Gans the captaincy, Powell was complimentary of the former SA Schools, Junior Springbok and Vodacom Blue Bulls player, who made his Blitzbok debut three years ago.

“Stedman is part of the leadership group and did very well when he captained a very senior Academy squad in Dubai last month,” said Powell.

“He is also playing very well and that helps. We do have some very experienced players in decision making roles too and that will help Stedman as well.”