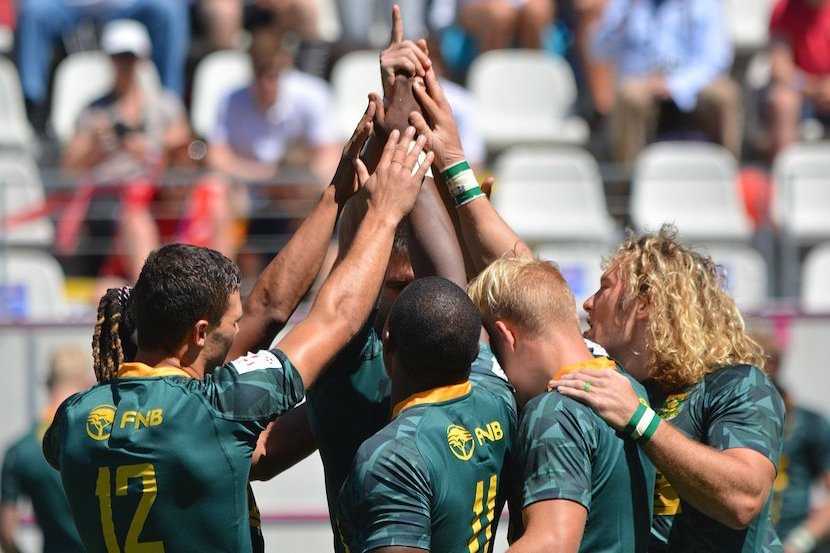 One week the Blitzboks are the champions of Los Angeles in the most dramatic of finals, the next week they’re beaten in Vancouver by lowly Canada in the bronze medal playoff match to finish 4th. That’s the rollercoaster of World Sevens rugby. There were a number of factors contributing to the Blitzboks’ relatively poor showing in Vancouver, most notably the two yellow cards in the semifinal against New Zealand and one against Canada. In the 3rd/4th place playoff, the Canadians lifted their game in front of their home crowd to secure their best finish ever in Vancouver. Coach Neil Powell bemoaned the ill-discipline and unforced errors which cost his team dearly. The South Africans lost ground on New Zealand in the overall standings. Coming into the Canadian leg of the competition SA trailed NZ by just four points. That gap has now been stretched to nine points after New Zealand beat Australia in the final to win their first Vancouver 7s since 2016. The Blitzboks have four more tournaments in London, Paris, Singapore and Hong Kong to make up lost ground. But the concerns continue over the spread of Covid-19, which forced the Asian tournaments to be moved until after the Tokyo Olympics, and Powell says the uncertainty over the future tournaments this season makes planning very tricky. If there was a glimmer of good news, it was Muller du Plessis being named in the Dream Team after the Vancouver tournament. – David O’Sullivan

The Springbok Sevens team will return to South Africa on Wednesday with 37 out of a possible 44 log points gained on the North American leg of the HSBC World Rugby Sevens Series, which includes a first HSBC LA Sevens crown, and a consolidated second place on the series standings.

However, defeats to New Zealand (27-15) in the semi-final and Canada (26-19) in the bronze medal match in Vancouver spoiled a nine match winning streak on tour and lost them their HSBC Canada Sevens crown in BC Place early on Monday morning (SA time).

Those defeats will hurt the team for a while, admitted Blitzboks coach Neil Powell, as they were untimely reminders that a lack of discipline and unforced errors are poison in any team’s diet.

The Blitzboks started the second day in Vancouver with a strong 26-10 win over the USA in the quarter-finals to book the showdown with New Zealand, but the log leaders outplayed the Blitzboks, successfully targeting them at the breakdown. A yellow card added to the misery and the deficit on the scoreboard as New Zealand scored twice in that time.

“That was very disappointing – it is already hard enough playing against them with seven men, so the yellow card was really damaging to our chances,” Powell said.

“I thought we had some opportunities in the second half while we were down 5-15 and that we could take control of the match again, but then we made unforced errors in basic aspects of the game.”

This included an intercepted pass by New Zealand, pushing the lead out to 27-5, before two late tries showed the Blitzboks’ determination.

Against Canada, who had their best performance ever at BC Place, the scores were tied 14-14 at the break, but another yellow card allowed the home side to score the vital try that separated the sides.

“We will have to be hard on each other when doing reviews, as the last matches of the tournament are always those you tend to remember,” said Powell.

“We wanted to give some of the younger players more game time as well and they would have learned a lot from this.”

According to Powell, the tournament victory in Los Angeles created more challenges in Canada: “For many of the younger players, winning first up was a new experience.

“Last season we won the second leg of the trips and this time it was the other way around. It does somehow make a difference in attitude and something we need to look at. The focus and starting at zero again was not as good as it should have been.”

The Blitzboks conceded more log points to New Zealand, with the lead now nine points, after the Kiwis won the final against Australia. The next tournament is the HSBC London Sevens on 23-24 May, followed by Paris on 30-31 May, but with the current uncertainty around the hosting of sporting events, Powell says it makes their planning tough.

“It was not ideal conceding more log points to New Zealand, but we will have to use the next tournaments to try and get those back. It is tough to plan with all the uncertainty, but we are taking a short break when we return and will see where things are after that,” he said.