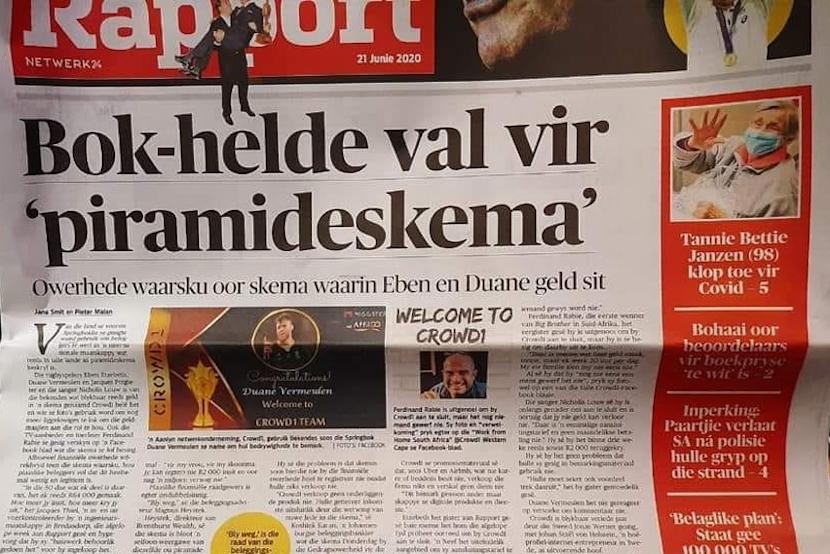 The Financial Sector Conduct Authority (FSCA) has warned that the suspected pyramid scheme Crowd1 is not authorised to do business in South Africa and has referred it to the SA Reserve Bank for investigation. This follows an article in Afrikaans Sunday newspaper Rapport that Crowd1 is using the pictures of prominent Springbok rugby players Eben Etzebeth and Duane Vermeulen and other celebrities to lure gullible people to “keep its money machine rolling”. Prominent investment adviser and regular commentator on Biznews Magnus Heystek is quoted as warning potential investors to steer clear as the scheme, although offered on a cellphone app, has all the hallmarks of a pyramid scheme. Still doesn’t change the fact: it smells like a pyramid scheme. Heystek tweeted that the “Crowd1 crowd didn’t like his comments about them in Rapport…now both Brenthurst and Rapport websites/Facebook pages are being crowd bombed with nasty stuff”. Meanwhile direct selling news and market data website Business For Home delisted Crowd1 from its database after authorities in New Zealand, Norway, Philippines, Namibia, Paraguay and Mauritius all flagged it as a suspected pyramid scheme. – Fadia Salie

According to the report, Crowd1 is marketing itself by using the pictures of rugby players Eben Etzebeth, Duane Vermeulen and Jacques Potgieter as well as singer Nicholis Louw and first Big Brother winner Ferdinand Rabe.

According to the report, some of them seemingly invested money in Crowd1.

The FSCA’s warning this week follows similar warnings from financial authorities worldwide. Despite this, local investors are adamant that the scheme is “totally legal and legitimate”, Rapport reported, quoting an import and export controller at an engineering firm in Bredasdorp, Jacques Thiel, who told the newspaper that he made R64,000 in the 50 days since he joined the scheme. He reportedly said he “did his homework thoroughly” before he invested.

Springbok Jacques Potgieter also told the newspaper that it was “definitely not a scam, but also not an investment”.

However, he described the workings of a typical pyramid scheme when he told the newspaper: “You put your money in and recruit people under you. The idea is to get four people, who in turn get four more people and so on.”

Investopedia describes a pyramid scheme as “a sketchy and unsustainable business model, where a few top-level members recruit newer members, who pay upfront costs up the chain, to those who enrolled them. As newer members in turn recruit underlings of their own, a portion of the subsequent fees they receive is also kicked up the chain”.

Etzebeth told the newspaper that many people tried to convince him to join the scheme and a cousin offered to pay his joining fee.

“I told my cousin it’s not in my nature to recruit people. Then he said he’ll do everything. He even opened an account for me,” Rapport quoted Etzebeth as saying.

He reportedly said he will never recommend to people to join something or invest their money in a specific place, but to do their own research and then decide. “That way no one can point fingers at anyone,” he told the newspaper.

Mentioning the likes of Krion, Kubus, Network and Rainbow, Heystek told Rapport the scheme is “merely a cellphone version of the same old pyramid scheme recipe with which South Africans have been caught many times over.”

The difference is that Crowd1 seems more legitimate because it works through an app that you download to your cellphone, Rapport reported.

The Crowd1 crowd didn't like my comments about them in Rapport on Sunday. Now both Brenthurst and Rapport websites/Facebook pages being crowd bombed with nasty stuff today. Still doesn't change the fact: it still smells like a pyramid scheme.

Crowd1 describes itself on its website as “one of the first digital multi-level marketing companies to address the challenges of long-term sustainability”. And in marketing material it says that just as Uber and Airbnb that do not own cars or beds, it sells nothing and do not offer any services.

The scheme claims to have an international network consisting of “millions of highly ambitious members with a love for entrepreneurship and sales that provides both employment and a source of income”.

Investment banker Koshiek Karan told Rapport he approached the FSCA to conduct a full, public investigation into Crowd1, while also warning people on social media against the scheme.

Here's the request sent across for a full investigation detailing exactly why Crowd1 is dangerous. pic.twitter.com/RrqVzcGQ2j

The Financial Sector Conduct Authority (FSCA) warns the public against an entity called Crowd1, which is not authorised to render the financial services it is providing. Crowd1 is neither an authorised Financial Service Provider (FSP), nor is it a representative of an authorised FSP. There is also no record of this entity having applied for a license with the FSCA.

The FSCA is mandated by the Financial Sector Regulation Act (FSRA) to regulate, investigate and impose enforcement on any individual and/or entity rendering financial services and/or financial products as defined in the relevant acts (FSRA, FAIS Act, FMA etc.). Any activity or entity outside our jurisdiction is referred to the relevant authority or law enforcement agency. In the case of Crowd1, the FSCA referred it to the Prudential Authority (PA) at the South African Reserve Bank, where it is currently being investigated.

While the FSCA cannot comment on the status of another agency’s investigation we urge the public to only do business with financial entities that are registered with the FSCA or are registered under the Companies Act (2008). Any investment or business opportunity that is offered to the South African public (that is not regulated by the Companies Act) must be offered by an authorised financial services provider (FSP).

While it is true that all investments hold risk, one with an unauthorised FSP should be considered extremely high-risk. It is also often fraudulent in nature, and likely to lead to losses for customers, for which there is little or no recourse. Therefore, the FSCA urges the public to always be mindful of this whenever approached by an individual or entity offering an investment opportunity. It is also important to remember that if it sounds too good to be true – it probably is.

Financial customers are encouraged to always be cautious when investing in alternative financial or investment products. It is prudent to first consider financial services and products offered by reputable financial institutions who can be held accountable for your money. For more information please contact the FSCA on either the toll free number (0800 110 443) or on the website www.fsca.co.za to check whether or not the institution or person you wish to invest with is authorised to render financial services.