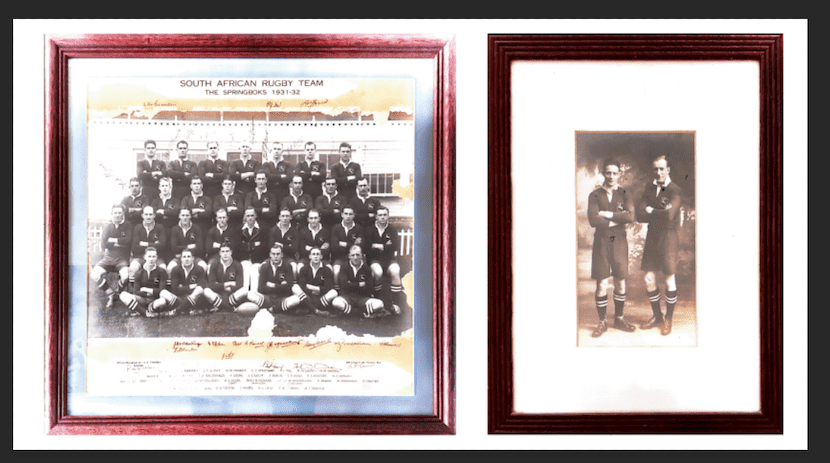 Patricia Mary Vosloo, daughter of the legendary Bennie Osler, recounts some of her memories of her father, his rugby career and Newlands Stadium.

Bennie Osler, born Benjamin Louwrens Osler in 1901, was a professional Springbok player from 1924 – 1933 and captained the team in the early 1930s. During his captaincy the team became the second team of all time to win a Grand Slam for South Africa in a single tour.

Bennie worked as an attorney by profession, and used to visit the stadium every day after work to practice his kicking. He is well remembered as a fly-half who “played a kicking game”, and his accuracy when kicking allowed his team to play a forward orientated game, commonly referred to as 10 man rugby.

Patricia recalls that her father often mentioned he had a ‘special place’ on the Newlands field which he liked to kick from. Perhaps his special secret spot, combined with his immense dedication to the game gave heed to his invaluable contributions to rugby as we know it.

Pat, now 90 years old, tells us of her childhood. Born and raised in Cape Town, she fondly recalls accompanying her mother to the stadium to watch her father play, “I was only little at the time, I had to stand on the seat to see anything.“

Bennie played at Newlands stadium from when he was a student at the University of Cape Town, until the end of his rugby career. “Newlands was very special to my dad.“ After his retirement as a player, he continued on to coach school teams, often stating that he far preferred the ‘cleaner game’ of school rugby.

Pat remembers Newlands being the ‘place to be’ on a Saturday. She reminiscences that her grandfather used to attend the game every single week. “He even had regular seats. He would always sit in the same place and meet up with his pals to socialize and enjoy the game.”  She recalls that people used to travel from quite a distance to attend the games, often purchasing season tickets and returning week after week from the outlying towns.

When Pat attended Stellenbosch University, she frequented the Newlands Stadium as a proud supporter of the Maties rugby team. She recalls that even then, the rivalry between the two teams was “quite serious”. When she met Boysie Vosloo, who later became her husband, she would attend games with him and his friends. She laughs that they would form a circle around her, so that she didn’t get crushed by the crowd. Funnily enough Boysies father and her father had both been on the first team in their university days, and had shared many a game together at the stadium as well. She recalls thoroughly enjoying the cricket too, which she describes as “beautiful to watch, sitting on those wooden benches under the oak trees.”

A lovely memory she shares is that Bennie had many avid fans amongst the Malay people of the Cape, who used to frequent the stadium to support him. Even after he stopped playing for the Springboks, members of the local community continued to invite him to weddings and other special events, which he attended with the utmost pleasure. Pat remembers accompanying him to a particularly beautiful wedding ceremony. “My dad never thought he was anything special, he had a fantastic friendship with many of his fans.”

Before he left for the war, he attended a farewell function, where he was presented with a very special and sentimental gift from his supporters. They presented him with a ring, and told him that if he wore it while he was away, he would return home safely. Pat remembers that he continued to wear the ring even long after his return from the war, a beautiful symbol of support and community between fan and player.

Bennie was inducted into the IRB Hall of fame for his contributions to rugby, many years after his passing. I remember my grandmother receiving the phone call and being invited to receive the award on his behalf in London. Her cousin Maeder went in her place, as his father Stanley had played on the Springbok team as well, alongside his brother. Bennie’s awards and team photos now hang proudly in our family home.

Although I never met my great grandfather or visited Newlands, I feel sad to see it come to the end of it’s era. I feel as if my family’s history is intrinsically interlinked with rugby and this majestic stadium. So much more than a structure, the stadium has indirectly played a significant role in my life, and the lives of many other fellow South Africans, a place where beautiful memories have been made and joyful experiences shared over many years.