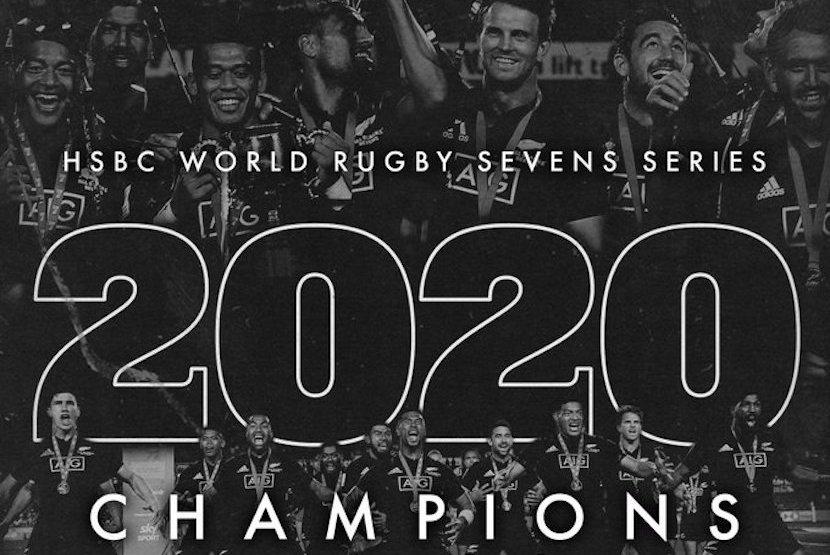 International Sevens rugby in the 2019/2020 season was expected to be the busiest and most exciting yet, with New Zealand, Fiji and South Africa fielding powerful squads and with the Tokyo Olympic Games looming in August. But the Covid-19 pandemic has destroyed the season. In February the World Rugby Sevens Series tournaments in Singapore and Hong Kong were postponed, and in May the International Olympic Committee announced the Tokyo Games would be delayed until next year. There had always been an expectation that the Sevens Series would be resumed. The Blitzboks would have been particularly hopeful as they were starting to hit their stride. After one bad tournament in Hamilton, the South Africans had raised their game and managed to pull back to 2nd place on the log, 11 points behind New Zealand with four tournaments still to play – London, Paris, and the postponed tournaments in Singapore and Hong Kong. They had few injuries concerns, the youngsters were performing beyond their limited experience, and some of exciting players such as Branco du Preez and Kwagga Smith were making a return from Super Rugby. But, with no end in sight to the Covid-19 pandemic and infection numbers rising in many countries, World Rugby has made an expected and inevitable decision to call a premature end to the Sevens Series, cancelling the remaining tournaments. South Africa take the silver medal after two tournament victories (Dubai and Los Angeles), two runners-up spots (Cape Town and Sydney) and 4th place in Vancouver. – David O’Sullivan

Springbok Sevens coach Neil Powell congratulated the All Blacks Sevens team after they were named winners of the 2019/20 HSBC World Rugby Sevens Series on Tuesday.

World Rugby announced the cancellation of the remaining four tournaments of the World Series due to the Covid-19 pandemic and declared New Zealand as winners of the shortened series of six tournaments as they were top of the standings.

Powell congratulated All Blacks Sevens coach Clark Laidlaw and his squad for winning the title after consistently performing well during the series.

“New Zealand won three of the six tournaments and had two more podium finishes, which shows their amazing level of consistency during the season,” said Powell.

“After these performances, I think they deserved the title. We had tournament victories in Dubai and Los Angeles and made the finals in Cape Town and Sydney, but our below par performances in Hamilton and Vancouver cost us.”

Powell said the news of the cancellation of the London, Paris, Singapore and Hong Kong tournaments was disappointing, but understandable.

“There was very good communication from World Rugby with the national coaches since the pandemic started, so we all knew that it was going to be a stretch to complete the season, if at all, and we know their decision was taken with the best interest at heart for all involved,” said Powell, who was pleased with their second place finish overall and the way the team performed.

“We played some good rugby at times and I will consider the season as a success. Much of the World Series planning and performances were with the Olympic Games in mind, so I think we kept on track with what we planned in that regard and I would like to thank my management and the squad for the effort they delivered.”

Powell added that the cancellation of the World Series brought clarity for the team: “We can now cancel all provisional dates and start to plan for the next series. There will be new challenges and some new players, but that is an exciting prospect something we are looking forward to.”

World Rugby’s said the decision to cancel the remainder of the World Series “followed detailed and constructive dialogue with the host and participating unions, and has been taken with the health and wellbeing of the rugby community and the wider public as top priority, and in line with the relevant national government and public health authority advice”.

World Rugby Chairman Sir Bill Beaumont said: “While it is extremely disappointing for players, fans, organisers and everyone involved to have to cancel these events due to the global Covid-19 pandemic, the health and wellbeing of the rugby community and wider society remains the number one priority.

“These difficult decisions have been taken following detailed consultation with our union partners and in line with advice from the various government and public health agencies around the world, given the global nature of the HSBC World Rugby Sevens Series.

“Rugby sevens is a key driver of global growth for our sport, particularly in emerging nations, and it firmly remains a top priority for our organisation. As we begin to see light at the end of the tunnel, 2021 has potential to be a very exciting year for rugby sevens with the Tokyo Olympic Games on the horizon.”