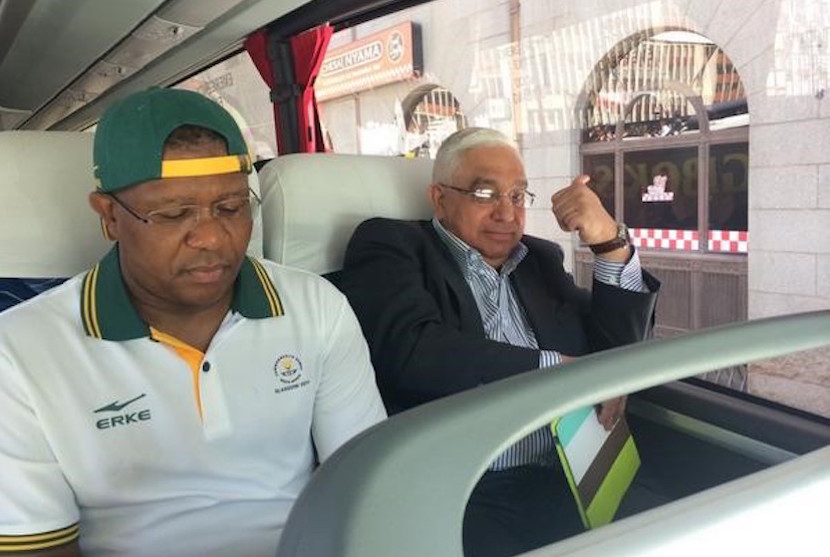 24 December: The Executive Council of SA Rugby has noted the outcome of the arbitration involving Jurie Roux and his former employer, Stellenbosch University.

We have referred the matter to our legal advisers for their advice on governance matters, as we have throughout this process.

We further note that the process allows for the parties to lodge an appeal, and we will make no further comment until the outcome of any such appeal is known.

​In its dispute against Mr JW Roux and Mr JC de Beer, which was referred to arbitration by agreement between the parties, Stellenbosch University (SU) received the final arbitration award from the arbitrator, Advocate Alasdair Sholto-Douglas SC, on 23 December 2020.

The arbitration proceedings flowed from summons issued by SU in the Western Cape Division of the High Court of South Africa on 19 June 2015. In this summons the University claimed the payment of damages from Jurie Wynand Roux as the first defendant, and Johannes Christiaan de Beer as the second defendant on grounds that they had breached their employment contracts with the University. A second claim against De Beer related to a claim that he had undertaken to pay a sum of money to the University. On 15 May 2019, the parties agreed to refer their disputes for determination by arbitration.

The University was successful in its claims. The main points of the arbitration award are the following:

There is an automatic right to appeal the final arbitration award, and the parties may also apply for possible clerical errors to be corrected.

Even if he didn’t benefit financially, funneling education money to rugby coffers in an unbudgeted unauthorized manner equates to fraud! Why is he not criminally charged? 😤🤔

Now you can understand why SA Rugby president, Mark Alexander filed a criminal defamation suit against me. The truth always hurts the corrupt. I’ve exposed Alexander and broke this Jurie Roux story back in 2013. The wheel turns slowly but it does turn! https://t.co/UBjfsNj15d

Graeme Joffe, a former CNN and 94.7 sportscaster, has been fearless in uncovering corruption in South African sport. And in doing so he has ruffled some powerful feathers – forcing him to flee for his life in the dead of night. Writing from the safety of his new US base, Joffe still keeps a keen eye on developments in South Africa’s sporting fraternity. In yet another excellent contribution, Joffe sides with Adriaan Basson, editor-in-chief of Netwerk24. Basson wrote an opinion piece titled: “Why does nobody care about Jurie Rouxgate?” Joffe welcomes Basson to his world of unanswered questions, and wonders if this is being swept under the carpet because of allegations that “corrupt stakeholders in SA Rugby are making money with funds that come from government to advance transformation”. – Stuart Lowman

I refer to your column in the City Press at the weekend headlined: “Why does nobody care about Jurie Rouxgate?”

You lament the fact there is no national outcry about the serious allegations that SARU CEO, Jurie Roux “siphoned off R35 million” from Stellenbosch University to fund the Maties rugby club.

Welcome to my world Adriaan.

I’ve been exposing the corruption, cronyism and maladministration in SA sport for the last four years and there has been no national outcry, due in large to a very conflicted and silent SA sports media. The corruption is rife from the Sports Ministry to SASCOC to the National Lottery Distribution agencies to a number of sporting federations including SA Rugby (SARU).

Ironically, it was me who broke the story which you refer to as “Jurie Rouxgate” back in 2013 and Í wrote a column stating: “The University of Stellenbosch is currently investigating a trail of major financial irregularities, which one insider said, could bring SA Rugby to its knees”.

Perhaps, the chickens are now coming home to roost.

There was no whistle-blower.

I was digging on the internet into SARU agents after rugby journalist, Mark Keohane had acted as an unaccredited agent for EP Kings captain Luke Watson and came across the story about Chris de Beer and his dismissal from the university. I chased the story for weeks and never let it go.

A third party then told me I was on the right track.

I’m not looking for a pat on the back (that’s reserved for SASCOC officials when they predict 10 Olympic medals and we get six) but give credit where credit is due.

We hear it a lot about the vibrant media in SA making officials accountable and herein lies the problem for sport.

Have you ever asked why your Naspers partners, SuperSport or Carte Blanche (M-Net) haven’t been running the “Jurie Rouxgate” story or other sports corruption scandals?

I would be very interested to hear the answers.

I hope your persistence with this story and good investigative work is not a Naspers “smoke screen” for what is really happening behind closed doors. Sports Minister, Fikile Mbalula gets more airtime on SuperSport than most athletes and a former Ministry spokesperson, Graham Abrahams (SuperSport Director of Enterprises & Regulatory) nurtures that relationship.

Speaking of Mbalula, he has been very quiet on the rugby scandal and threw a hospital pass to his deputy, Gert Oosthuizen who was quoted as saying:

“A presentation will be made to us (by SARU) after the completion of their own investigation and we will step in if needed. But for now we have to respect SARU’s independence.”

Former Cricket SA CEO, Gerald Majola will look like a saint once all the rugby dirt comes out but yet Majola had to face a commission of inquiry ordered by the Sports Minister.

Why is there no urgent COI for Roux and company?

The answer may lie in the serious allegation that corrupt stakeholders in SA Rugby are making money with funds that come from government to advance transformation.

Another big red flag is the payment of R90 million per annum to “My Players” for something called ‘Collective Image Rights of the players’? The rights are supposedly controlled by SARPA, a trade union, but the R90m pa for five years is paid to a Pty Ltd. Apparently the players are the shareholders but should any player ask for the financials, their curiosity is ‘controlled’.

Former Absa Deputy Group Chief Executive Officer Louis von Zeuner was brought in by SARU to head up My Players a couple years ago and is often seen close to Mbalula at rugby test matches.

Von Zeuner is a Cricket SA board member as well and has become very powerful.

Then there’s the SARU deputy president and SASCOC board member Mark Alexander who I’ve exposed for receiving kickbacks for a SARU commercial contract renewal, which was flagged in the Primedia Sport financials.

Perhaps, that’s why there has been no outcry from 702/EWN Sport (Primedia).

After a week, I’m still waiting for a response from EWN news editor Katy Katapodis to my email asking:

“As a trusted media organisation, how much longer is Primedia going to withhold the kickbacks information from the public?”

Alexander is close to Mbalula through his SASCOC and Lottery links and was Chairman of the Durban 2022 Commonwealth Bid on SARU time and is now angling for the SARU presidency.

So, Roux has been left to run a “mini FIFA” withclp but without anyone looking over his shoulder.

Lastly Adriaan, Rapport has broken stories about gross financial and tender irregularities with the SA sports awards. Why did you guys back off especially after one of your journalists were threatened?

That should have told you something. You were on the right track.

The Sports Ministry (with their dirty conduits eg. Sports Trust), SASCOC and the Lottery Distribution agencies are the key to closing the door on SA sports corruption.

That’s the money trail that needs to be followed but will the conflicted mainstream media do it?