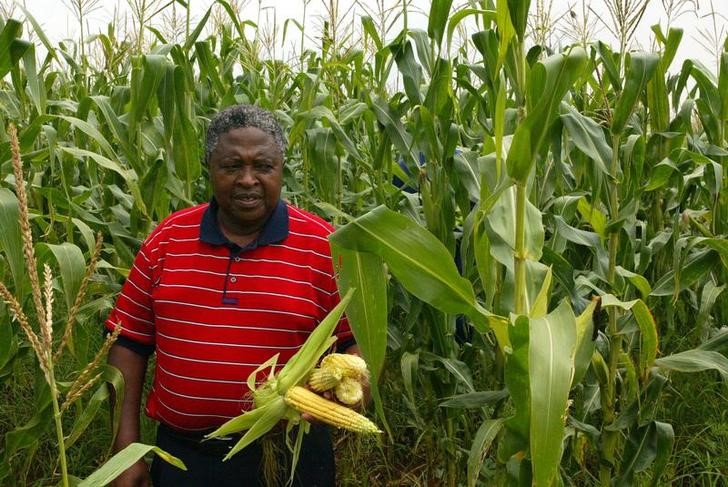 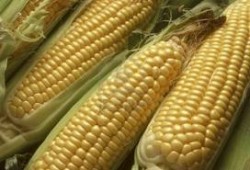 Challenges faced by farmers in South Africa’s premier maize producing region have been taken off the scale by the worst drought in 22 years – the third worst since recording began in 1918. Although extreme weather conditions are never welcomed, this one, ironically, could hardly have been better timed. South Africa’s political debate around agriculture has been charged by emotion rather than logic. And in the maize producing area of what used to be the Western Transvaal,  one doesn’t need to read The Seed Is Mine to understand why it’s an emotion-charged region – consider, for instance, where the ultra right wing Afrikaner Weerstand Beweging was born. Food security is key for any progressive economy. The drought may well push that reality up the agenda during the current land reform process. – AH
By Andre Janse van Vuuren and Tshepiso Mokhema

(Bloomberg) — Ryan Mathews peeled a withered cob taken from his sun-scorched fields filled with waist-high brown corn plants that should have towered above his head with green leaves by March.

“I have never, ever in my memory seen this,” said Mathews, 31. The birth of his first child a month ago, a boy called Rogan, is the only thing that’s lifted him from a depression over the state of his crop, he said. “This is not something that happens every day — I don’t know this.”

South Africa’s worst drought since 1992 has decimated corn crops in the North West province, where Mathews’ farm lies, and he’s questioning whether it’s worth incurring the cost of harvesting the little that’s left. His forefathers first came to the Vaalplaas farm near the border with Botswana in 1880, and the plantation has only had less rain in two years since 1918, data from the government weather station on his land show.

This year’s corn crop in South Africa, the world’s largest producer of the white variety after Mexico, is set to shrink 32 percent from 2014’s harvest, the biggest in 33 years, according to a March 25 estimate by a government-convened committee. Prices have surged and the nation is importing the yellow type, used as animal feed, according to Grain SA, the biggest farmers’ lobby. The limited global availability of the white cultivar, ground into meal to make a staple food in southern Africa, means importing it is difficult, which may raise prices further.

“We’ve lost the privilege of food security,” Grain SA Chairman Louw Steytler told a farmers’ congress in March in the Free State province’s grain hub of Bothaville. “The socioeconomic consequences that we will deal with in this coming year are stark.”

This season, South Africa will probably produce 9.67 million metric tons of corn, the Crop Estimates Committee said on March 25. That would be the smallest harvest since 2007. Planting takes place in the summer months of November and December, while the marketing season starts in May, which is the start of the nation’s winter and is when harvesting begins.

Mathews’ farm produced as many as 4 tons a hectare during 2014’s bumper intake, matching the average yield for growers in the North West province, where his farm is located. Now, he’s unsure whether he will achieved 6 percent of that after spending close to 4,000 rand ($337) per hectare on input costs.

South African white corn has risen 24 percent this year while the yellow variety is up 11 percent.

The North West province accounted for 20 percent of last year’s crop and the Free State, which has also been affected by drought in 2015, made the biggest contribution at 44 percent, Grain Information Service data show.

The government has convened what is known as a National Drought Task Team — which comprises five ministries, the South African Weather Service and four agricultural organizations — to assess conditions and come up with solutions, Agriculture Minister Senzeni Zokwana said in March 23 written reply to lawmakers.

“This is a disaster for the whole sector, not just the farmers,” Zokwana said at Grain SA’s March 4 congress. “Without the farmers, there will be no sales next year. Without production there is no food.”

For Mathews’ younger brother Steven, who farms cattle on Vaalplaas, which is near the town of Lichtenburg, the drought will push up feed costs. His herd has already consumed all the surplus corn-based fodder he’d earmarked to be used from August, which is the end of the region’s typically dry winters.

The stock meant to be used for the second half of winter “has ended up carrying you through summer,” said Steven, 25, looking at the bare earth that at this time of the year is usually covered by lush grasslands that hide cattle from view. “A lot of people aren’t going to be able to carry their animals through the winter.”

For older brother Ryan, the next season will probably pose a bigger risk because he’s afraid he won’t qualify for insurance, which covered about a third of his crop this year. He will need to apply for finance should he choose to plant on his 1,600-hectare (3,954-acre) farm in the coming period, and will probably not be able to obtain as much as in the current season.

“A lot of those farmers have planted and they are not getting any return from it and unfortunately, some of them might not be able to survive until next year,” Lullu Krugel, an economist at KPMG LLP, said by phone.

Banks are unlikely to provide him finance to plant the same-sized crop, Mathews said. Other growers in the region are selling portions of their land to access capital, he said.

Recent rains are too little, too late.