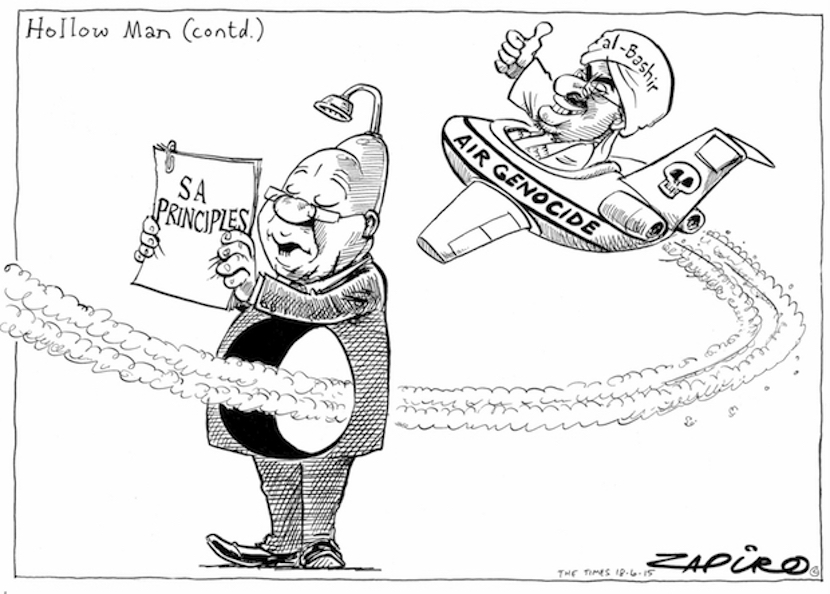 The list just gets longer, as one blunder follows another, like the role of credits after a bad action movie – only this time the themes are Marikana, Nkandla and al-Bashir – to name a few. And the problem – these events cause a ripple effect as each is compounded by the previous one. And every financial planner talks about the power of compounding, unfortunately in this case it’s the complete opposite. So off the back of al-Bashir’s slippery exit, the South African government is now reconsidering its role at the International Criminal Court. And we can question why South Africa doesn’t need to be a part of the ICC, even the Americans no longer intend to become a state party, and hence have no legal obligations to them. The problem, South Africa was a signed signatory and disregarded this role entirely by letting the Sudanese president flee. And the compound effect – what value does a signature really hold – let’s hope investors turn yet another blind eye. – Stuart Lowman

A week after his appointment by President Jacob Zuma, the High Court said he should consider filing criminal charges against several cabinet ministers for defying its order to bar Sudanese leader Umar al-Bashir from leaving the country. While the government granted al-Bashir immunity to attend an African Union summit in Johannesburg, the court ruled it was obliged to arrest him under two International Criminal Court indictments.

The decision by Abrahams, who has 17 years experience in the prosecution service, will help define the integrity of the justice system and the court’s ability to hold the state to account, said Bonita Meyersfeld, a law professor who heads the University of Witwatersrand’s Centre for Applied Legal Studies.

“I’d be very surprised if there is an investigation,” she said by phone from Johannesburg on Thursday. “There is an increasing abrogation by the executive of the constraints imposed by the constitution. I think we are in a real constitutional crisis.”

The ICC indicted al-Bashir, 71, in 2009 and 2010 on charges of war crimes and genocide for his role in atrocities in Sudan’s western Darfur region, where insurgents took up arms in 2003. As many as 300,000 people have died in the conflict, mainly from illness and starvation, according to United Nations estimates.

Al-Bashir was able to leave South Africa because his passport wasn’t presented to immigration officials when his delegation arrived at the Waterkloof Air Force base to board his presidential plane, the government said Thursday in an affidavit submitted to the High Court.

Abrahams started his career as a clerk in South Africa’s justice department in 1994 and climbed through its ranks to become a senior state advocate. He handled numerous high-profile cases, including the prosecution of Nigerian militant Henry Okah on terrorism charges and the prosecution of white supremacist leader Eugene Terre’blanche on charges of terrorism and sabotage.

Several chief prosecutors have been dogged by allegations that they failed to maintain their political impartiality and were unfit to hold office.

Vusi Pikoli was fired from the post in 2008 — a move he said was taken because he refused to halt investigations into graft allegations against former police chief Jackie Selebi, who was later convicted.

His successor Mokotedi Mpshe dropped graft charges against Zuma in 2009 just weeks before he became president. The main opposition Democratic Alliance has been fighting to get the charges reinstated.

In November 2009, Zuma appointed Menzi Simelane to the post, even though a state inquiry found he gave contradictory evidence during an inquiry into Pikoli’s conduct. Two years later, the Supreme Court of Appeals ruled Simelane’s appointment invalid because Zuma failed to determine if he was qualified for the job.

The post was then temporarily filled by Nomgcobo Jiba, who was charged in March this year with two counts of fraud and one of perjury.

Zuma named Mxolisi Nxasana to replace Jiba in 2013, only to open a probe into his fitness to hold office in February this year. Nxasana, who stood trial for murder in 1985 and was acquitted on the grounds of self-defense, challenged his suspension before stepping down on June 3. The Johannesburg- based Star newspaper reported that he received a 17.3 million rand ($1.4 million) payout.

Jeff Radebe, a minister in South Africa’s presidency, declined to comment on the possible prosecution of his colleagues, saying the government was still studying the High Court judgment.

South Africa may consider quitting the International Criminal Court because The Hague-based tribunal sought to compel it to arrest al-Bashir without proper consultation and following due process, he told reporters in Cape Town on Thursday.

National Prosecuting Authority spokesman Luvuyo Mfaku said the matter is still before the courts and that if the case is sent to the prosecutors, they will consider it.

“It’s a significant test; the government has failed to adhere to an order of court,” Lawson Naidoo, executive secretary of the Council for the Advancement of the South African Constitution, said by phone from Durban. “It doesn’t send out a good signal about the strength of the rule of law in South Africa if a government can seek to use political considerations to try and undermine a legal issue.”