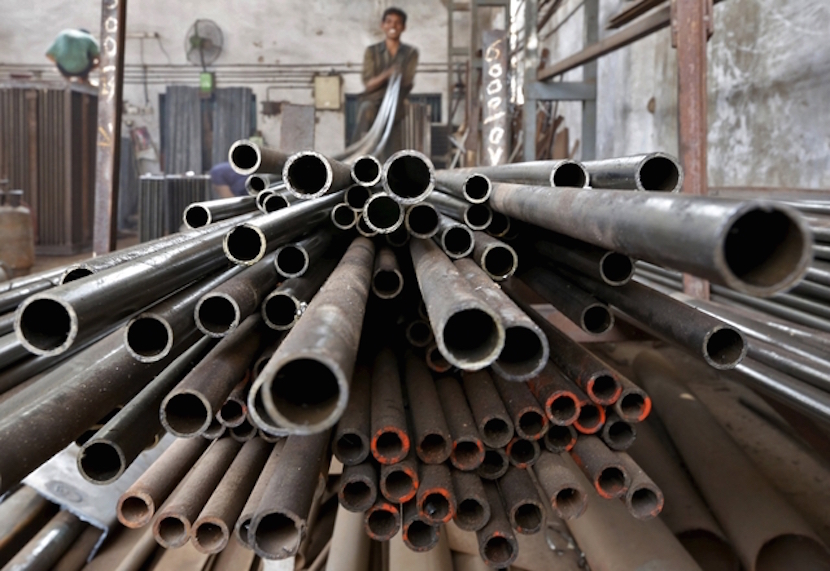 Before interviewing him on the ArcelorMittal interim results, CEO Paul O’Flaherty agreed with a suggestion that he may have jumped from the frying pan into the fire. O’Flaherty was previously financial director at Eskom. Tough as life must be at SA’s embattled electricity utility right now, compared with his new job, life there was a breeze compared with running SA’s biggest steel company. O’Flaherty has warned that ArcelorMittal is teetering and that without import duties on certain types of steel, Chinese dumping will his company to retrench half its 13 500 employees. That call has become even more urgent after the Chinese yuan dropped 3.5% in the past two days following Beijing’s official devaluation of its currency. In our interview yesterday where he updated his 2030 scenario, Jakkie Cilliers of the ISS argued that SA’s political love affair with the Asian giant is a mistake: “China cares only for China,” he opined, “South Africa should realise it needs to look after itself.” Fighting the steel dumping would be a start.  – Alec Hogg

(Bloomberg) — It’s just what global producers of steel and aluminum didn’t need: a yuan devaluation that make the flood of exports from the world’s biggest producer even cheaper.

China’s shipments of steel and aluminum, used in everything from fridges to skyscrapers, surged to a record this year as the slowing economy left a domestic surplus with nowhere else to go. The surprise move by the central bank, which left the yuan heading for the biggest two-day slump in 21 years, make the products cheaper still, threatening more pain for world rivals struggling with lower prices.

Chinese exports are “causing a disturbance in the entire pricing and also the overall supply and demand dynamics in the international market,” said Seshagiri Rao, chief financial officer at JSW Steel Ltd, India’s third-biggest steelmaker. “We are already seeing a lot of trade actions by various countries. In my view this will further create problems for the industry.”

The central bank’s devaluation of the yuan has sparked fears of an Asian currency war and damped bets the Federal Reserve will raise interest rates in September. The yuan fell 1.4 percent to 6.4105 per dollar as of 9:59 a.m. in Shanghai on Wednesday, after sliding 1.8 percent a day earlier.

Steel shipments surged 27 percent to 62.13 million metric tons in the first seven months of the year, the highest ever for the period, data compiled by Bloomberg show. Exports were about the same as output in Japan, the world’s second-biggest producer, according to World Steel Association data. Aluminum sales rose 28 percent to 2.87 million tons, customs data show.

Steel rebar futures in Shanghai have slumped 32 percent in the past year and aluminum prices declined 24 percent on the London Metal Exchange.

(Bloomberg) — China has stepped up efforts to boost old growth drivers as new ones fail to offset slowing investment and trade, with the yuan headed for its biggest two-day drop in 21 years after policy makers allowed markets a greater role in setting its value.

The offshore yuan slid after the central bank set its dollar reference rate 1.6 percent lower; that came after a record 1.9 percent cut Tuesday. To bolster sluggish investment, China had this year already expanded a debt swap program to ease financing pressure on local governments and injected funds into policy banks so they can channel more credit to the real economy.

Premier Li Keqiang, seeking to rebalance the economy away from a reliance on investment toward greater consumption, was facing a potential miss of his 7 percent expansion target for 2015. Resorting to a currency devaluation and credit-fueled growth adds to anxieties that China’s debt and over-capacity problems will only worsen.

“New growth drivers are absolutely not kicking in quickly enough to offset the slowdown in investment and real estate,” said Andrew Polk, a Beijing-based economist at the Conference Board who previously worked at the U.S. Treasury Department. “It is understandable to take two steps forward and one back in order to manage the slowdown, but China’s economic managers seem to be taking one step forward then two backward.”

In a note explaining the devaluation Tuesday, the central bank cited market pressures to depreciate the yuan and to the currency’s real effective exchange rate being relatively strong. In a statement Wednesday it said there was no economic or financial basis for the yuan exchange rate to depreciate continuously.

The yuan devaluation also may be designed to bolster China’s case for gaining admission to the International Monetary Fund’s so-called Special Drawing Rights basket of currencies, which would bestow reserve currency status. The IMF welcomed China’s move and said there was no direct effect on its ongoing review of the SDR basket.

The stimulatory impact of a weaker currency may be muted if the yuan’s move remains contained and because the contribution to economic growth from exports has shrunk over time. Exports of goods and services as a share of gross domestic product declined to 22.6 percent last year from a high of 35.7 percent in 2006, according to World Bank data.

There may also be knock on effects: The devaluation is likely to spur capital outflows of almost $80 billion, according to an estimate by Bloomberg Intelligence chief Asia economist Tom Orlik in Beijing.

Larry Hu, head of China economics at Macquarie Securities in Hong Kong, said the central bank will need to step in.

“The PBOC will control the situation by intervening in the foreign-exchange market to prop up the yuan, and lower the reserve-requirement ratio by 100 basis points in the second half to ensure liquidity is ample,” he said.

“The current policy is designed to secure a soft landing rather than a return to high-speed growth,” said Zhao Yang, chief China economist at Nomura Holdings Inc. in Hong Kong. “It’s different from previous stimulus measures and consistent with goals to restructure the economy.”

Data for industrial production scheduled for release Wednesday is unlikely to bring much solace, with the median estimate of economists surveyed by Bloomberg News anticipating a 0.2 percentage point fall to 6.6 percent in July from the previous month. Retail sales are expected to remain flat from a month earlier while fixed-asset investment for the year to date is expected to edge up.

The unexpected currency move wasn’t without critics, who said it was a shift back to old methods of propping up growth.

“There is no economic rationale for what they are doing,” said Victor Shih, a professor at the University of California at San Diego who studies China’s politics and finance. “It is just the planned economy’s obsession with reaching targets rearing its ugly head again. Past experience tells us that such obsession often comes with high long-term costs.”

The yuan had maintained its strength against the dollar even as the currencies of competing nations depreciated, undermining the nation’s export competitiveness. Colliding with a property investment slump and reorganization of local government financing, growth has been below the government’s target all year, according to Bloomberg’s monthly tracker.

“Boosting new growth drivers like consumption makes sense but it is a very long-term process,” said Shane Oliver, head of investment strategy at AMP Capital Investors Ltd. in Sydney. “So when growth threatens to slow too much in the short term the government has little choice.”