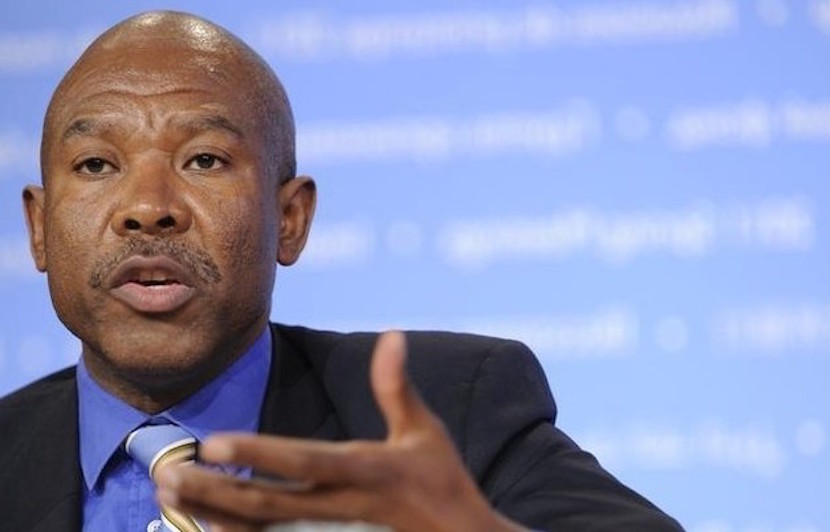 Inflation is always subject to a debate. Everyday citizens question the 3 to 6 percent band as it is not what their wallets are telling them. In the article below, well-known Investec economist Brian Kantor takes the debate one step further. Kantor looks at inflationary expectations in South Africa and argues why they should be ignored by monetary policy. It’s an interesting discussion given the Reserve Bank meets in November, where a decision could see the ‘Grinch steal Christmas’. Well worth the read. – Stuart Lowman

The Governor of the South African Reserve Bank Lesetja Kganyago, recently sounded a familiar warning about higher inflationary expectations in South Africa. He is of the view that more inflation expected leads to higher inflation rates. For him, either demand side or supply side forces acting on prices justify interest rate increases, because of their impact on inflationary expectations – that will elevate inflation rates and higher interest rates might counter them.

According to the Reserve Bank Governor in a recent speech:

“As I have already mentioned, average expectations have been fairly stable around the top of the target range for several years now. But focusing on a simple average conceals useful information. Medium-term expectations have converged strongly over the past four years, revealing something near a consensus that South African inflation will be around 6 per cent over the longer term. This is not because of shocks, which cannot be foreseen with any clarity several years out. This is because the 6 per cent is perceived as the normal level.

“The inflation outlook is not favourable. We expect headline inflation to average more than 6 per cent in the first and fourth quarters of next year, and just less than 6 per cent in 2017. This forecast faces sizeable risks, especially from currency depreciation as well as wage and price determination processes. With weak commodity prices and US monetary policy normalisation coming closer, we cannot be complacent about the exchange rate and its potential inflation consequences. Furthermore, we confront medium-term inflation expectations bunched around the top of the target range. The risk of positive inflation shocks feeding into higher expectations and price setting remains very high.” (South Africa’s growth performance and monetary policy, an address by Lesetja Kganyago, Governor of the South African Reserve Bank, Bureau for Economic Research, Cape Town, 22 October 2015).

These expectations of inflation will surely be derived from an understanding of the forces expected to drive the (average) price level higher, or sometimes even lower. The monetary policy actions and reactions expected of the central bank must play a large role in any working model of the inflationary process that informs inflation expected.

It makes every sense to expect economic agents with price or wage setting powers, firms and trade unions, to budget and bargain with future inflation in mind. The more inflation they expect over their planning horizons, the more protection they will seek, up front, in the price and wage demands they make of their customers or employers.

But when they expect more inflation and act accordingly, price setters will also have to react to market conditions as they are revealed to them. They will have regard to what their markets can bear, as opposed what they were expected to bear, in the form of pre-determined wage and price increases. The expected level of demand for their goods and services at the prices set, influenced as they will have been, by their models of inflation, may not happen in the way expected.

Rational, income or profit maximising or optimising economic agents have every good reason to plan for inflation and negotiate up front their price and employment benefit demands accordingly. They may well underestimate or overestimate realised inflation because they have inaccurately forecast the forces of supply and demand that ultimately determine prices and expectations. They may well have failed to accurately predict the policy reactions of the central bank.

Inflation targets may help anchor inflation expectations but they have to be made credible by the actions and not only the intentions of central bankers to contain aggregate demand within the low inflation limits of potential supply applying the tools of monetary policy. The Governor of the Reserve Bank appears to find it difficult to understand why an expected 6% inflation rate has become the norm. Perhaps we can help him understand these inflationary expectations and hopefully encourage him to ignore them, in the interests of the SA economy.

Any model of expected inflation in SA would have to give a prominent role to the effective foreign exchange value of the rand. The problem for any such forecast is that the rand has not and cannot be expected to follow some form of purchasing power parity (PPP). (See below a comparison of the rand/dollar exchange rate and its PPP equivalent since 1995. 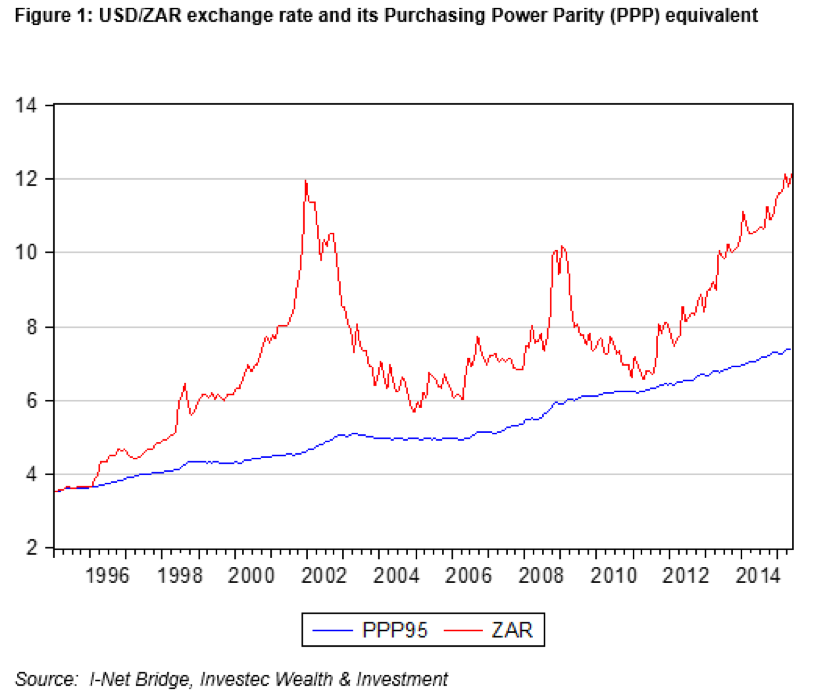 If more inflation were accompanied consistently and contemporaneously by a weaker exchange rate, a weaker rand that would automatically serve to maintain the competitiveness of importers or exporters in the SA and foreign markets, then modelling exchange rates and inflation rates would be a much easier task than it is. The rand prices of domestic goods and services and of foreign exchange would be moving in the same predictable inflation linked direction under the same inflationary forces at work.

The rand unfortunately does not follow or move simultaneously with differences in inflation between SA and its trading partners. Much more typical is for the exchange value of the rand to change in response to independent flows of global capital. Flows into or out of SA financial markets, that take their cue from degrees of global risk aversion, may have more to do with the sense of global risks than SA economic or political risks.

Therefore, in these unpredictable circumstances, the exchange value of the rand leads rather than follows the inflationary process. Import, export prices and domestic prices follow the exchange rate in more or less close order, depending on global inflation trends, the state of the SA economy and the policy reactions of the Reserve Bank.

The differences in 10 year RSA and US bond yields have remained consistently around 5% to 6% per annum. In other words, the rand has been consistently expected to weaken by about the same average percentage rate over an extended period of time. The more the rand is expected to weaken, the more inflation would be expected (or the other way round, the more inflation expected relative to inflation in the US, the weaker the rand).

The foreign exchange market has consistently priced in rand weakness. The rand exchange rate however has not always weakened as the market has expected it to. Lengthy periods of (unexpected) rand strength against the US dollar are identified in figure above though they have influenced inflation itself much more than inflation expected, because actual rand strength has not led to expected rand strength. PPP may well be expected to hold, in practice it has not except perhaps over the very long run far beyond the planning horizons of economic agents. 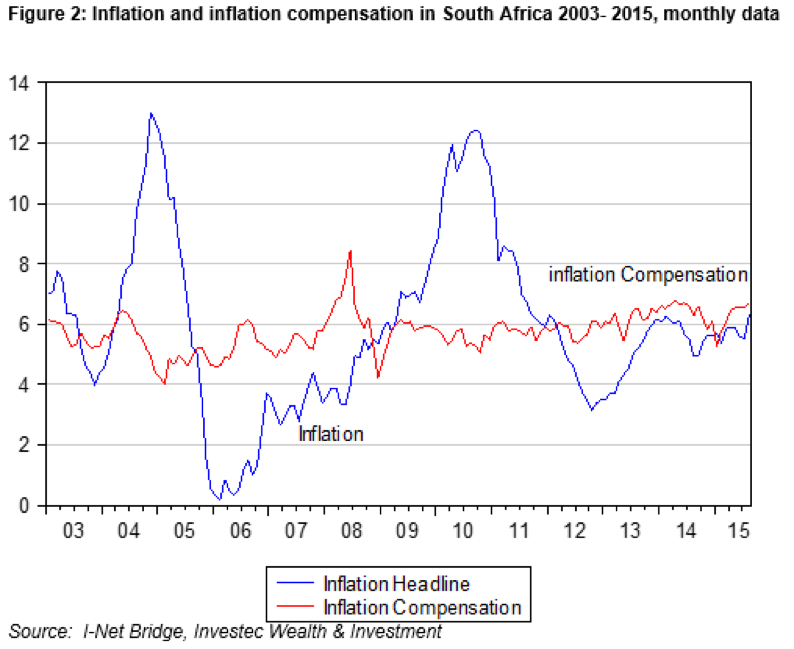 Another uncomfortable implication of the actual behaviour of the spot US dollar/rand exchange rate is that it tends to weaken as interest rate spreads widen and strengthen as the spreads narrow. Hence the more the rand weakens the more the market expects it to weaken further. The interest carry, influenced by domestic interest rate settings, can thus have a perverse rather than a helpful influence on the foreign exchange value of the rand. This provides the evidence that higher interest rates in SA can be counterproductive in their influence on inflation; they may well lead to rand weakness and higher rather than lower prices in general.

As we show below, the recent increase in expected inflation in SA is associated with a recently wider spread between RSA and US bond yields. That is with more expected rand weakness. The market recently has therefore and consistently been pricing more rand weakness and so more inflation expected in SA (see below). 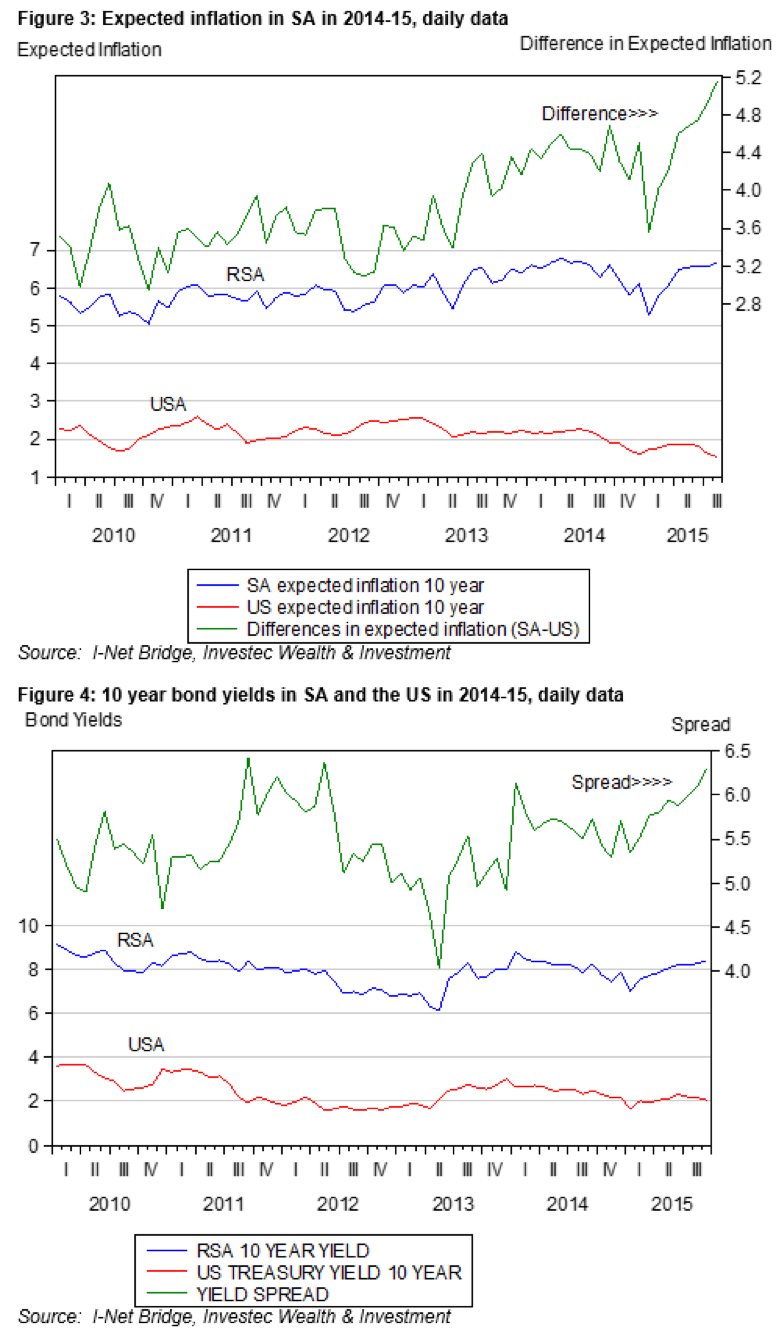 A further influence to be factored into forecasts of inflation will be the consistent pressure of administered prices on the CPI. These prices are administered by municipalities and the central government, exercising monopoly power with revenue maximising objectives.

These extra charges are better regarded as higher taxes rather than higher prices, as they are regarded in the case of taxes on energy designed to raise revenue. Any forecasting model of inflation in SA would add variables to represent the force higher taxes and administered prices on the CPI. Such administered or regulated price increases have proven to be a more or less continuous influence on prices in general and can be forecast to remain so. The higher prices that follow higher tax rates in themselves reduce aggregate demand for other goods and services and widen the output gap, could help make the case for lower rather than higher interest rates. If however they are incorrectly thought by the Reserve Bank to further encourage inflationary expectations – that lead to ever more inflation- less rather than more accommodating monetary policy – becomes more likely and slower growth in spending and output will tend to follow.

Read also: Cees Bruggemans – How low can the Rand go? Half fair value? R20 to $?

The Reserve Bank remains strongly committed to its inflation targets and often pronounces its fear of self-fulfilling inflationary expectations. This narrative, especially when accompanied by the message that interest rates are bound to move higher, makes it vulnerable to the accusation of having become soft on inflation should it not respond with higher interest rates to higher inflation rates, regardless of the cause of higher inflation.

Monetary policy in South Africa needs a different narrative; one that does not accept that inflation expectations drive inflation; one that would allow monetary policy to ignore supply side shocks, especially exchange rate shocks when such shocks temporarily force the price level higher. It needs a narrative that would allow the exchange rate to absorb some of the shocks of a volatile global capital market that would not call into question the inflation fighting credentials of the Reserve Bank. The Reserve should be expected to react to excess demand in the economy that might drive prices higher, not higher prices themselves, whatever their provenance.

Inflationary expectations will not drive inflation in SA unless the Reserve Bank allows it to do so with highly accommodating monetary policy settings. Monetary history tells us clearly that the best policy response to an exchange rate shock is to leave monetary policy settings largely unchanged. The policy failures of 1998 and 2002, when interest rates were raised to protect the rand or to fight the higher inflation that inevitably followed the weaker rends of the time, should be salutary.

The danger to the SA economy of a weaker rand, weaker largely for reasons linked to global events rather than SA ones, is no less inflation and still slower growth. The danger is that the Reserve Bank will raise rates and widen the output gap. That potential economic growth will be needlessly sacrificed with possibly perverse effects on the rand and so on inflation itself.

Expected inflation in SA can only retreat with less rand weakness expected. As we have indicated, monetary policy in SA will have minimal influence on the expected value of the rand. Our advice to the Reserve Bank is to recognise its inability to influence inflationary expectations, and to ignore them while concentrating on sensible demand management. Should the actual inflation rate recede consistently over time in response to sensible monetary policy, inflationary expectations and the working models of inflation in SA will catch up with reality.