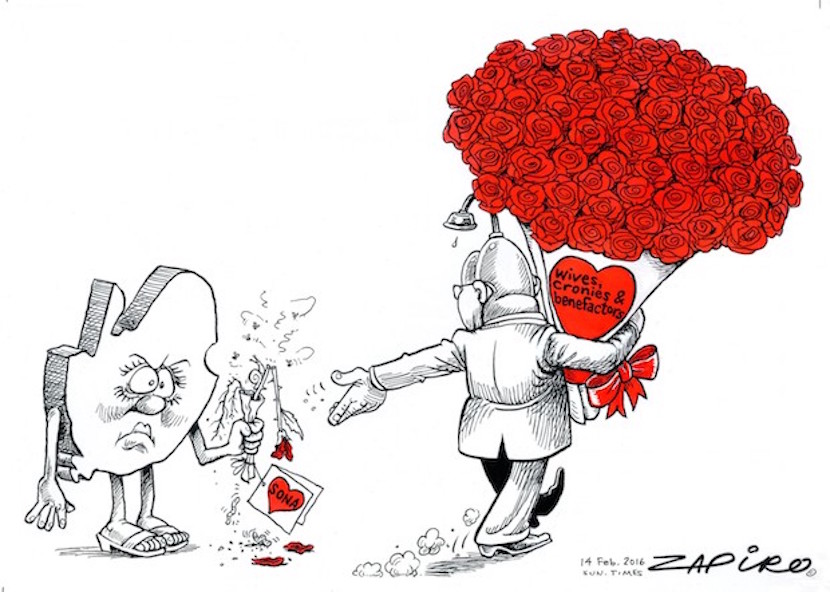 LONDON — Sometimes political hypocrisy can be breathtaking. At Tuesday’s meeting with business leaders, President Jacob Zuma encouraged his trade minister Rob Davies to do a detailed presentation of how a new “one stop investment shop” would attract foreign capital into SA. The overly complex bureaucratic structure was taken apart by, inter alia, Barclays Africa CEO Maria Ramos. With hindsight, she needn’t have bothered. In our highly connected age, Government propaganda is no match for the truth. And, as the excellent expose in this morning’s Financial Times of London reveals, those considering investing into South Africa are influenced a lot more by deeds than words. Once again, the central characters in this ugly sage of political connections and crony capitalism trumping honest business, are the Gupta family. The Indian immigrants whose patriarch identified SA as the “new America” and relocated here two decades back with R1.2m in their combined bank account. Their business approach has reaped them billions in rewards. But all of that may now be unravelling. The EFF stole the show at Zuma’s State of the Nation address last week by paunching a new #Zuptasmustfall slogan. The FT’s allegations are equally damning. The newspaper is direct: The Guptas used their influence among within the Government departments and Eskom to strong-arm Optimum coal mine away from multinational mining group Glencore. Because it has other assets in the country, Glencore was powerless to resist or even complain. It is a powerful warning from Europe’s most influential newspaper of how business is conducted in SA today. Cry the Beloved Country. – Alec Hogg

By Andrew England and James Wilson in Cape Town

Allegations have emerged that South African authorities put pressure on Glencore before it agreed to the sale of a coal mine to a local company whose owners are at the centre of the controversy because of their links to the country’s political leadership.

After a long-running dispute between Glencore and South African power utility Eskom, over coal supplied by the mining company’s lossmaking Optimum Coal unit, the entity was placed in business rescue proceedings last year and subsequently sold to Tegeta Exploration and Resources.

Tegeta is a subsidiary of Oakbay Resources and Energy, a Johannesburg-listed company controlled by the Gupta family, which has been embroiled in controversy because of its close links to President Jacob Zuma.

Opposition parties and critics of the Zuma administration allege that the Guptas have enjoyed undue influence with the presidency, including favouritism in business deals. The Guptas have denied the claims.

Tegeta is also part owned by Mabengela Investments, a private company, in which Mr Zuma’s son, Duduzane – who has a history of business links with the Guptas – is a director. He is also listed as a non-executive director of Shiva Uranium, another mining company controlled by Oakbay.

Read also: Glencore “pleased” with mine sale to Gupta – no comment on Mining Minister

South Africa’s department of mineral resources has strongly denied that it pressed Glencore to agree to the sale of Optimum Coal to Tegeta.

However, one person familiar with the deal, who did not want to be identified, said Glencore had faced pressure.

This person said the department of mineral resources had used the threat of regulatory action under South Africa’s mining laws to influence Glencore.

“It was an interventionist strategy with a credible threat from the authorities and it would take a massive company to say ‘No’ to the [department of mineral resources] in the face of a threat like that,” added this person. “It’s never confined to a [single] mine once a [mining] group is a target, the concern is the impact on other operations, that’s why the groups are scared.”

A second person familiar with the Optimum Coal transaction said Glencore had privately made it known the company felt its “arm twisted” to agree to the sale to Tegeta. A third person said bankers involved in the deal were told by a senior official at the department of mineral resources that Optimum Coal had to be sold to Tegeta.

Last August, Glencore initiated so-called business rescue proceedings at Optimum Coal, because the unit was suffering “financial hardship” due to the terms of its coal supply contract with Eskom.

Shortly afterwards, the department of mineral resources briefly suspended Optimum Coal’s operating licence for what it described as the “inhumane” way Glencore planned to cut about 380 jobs at the unit.

In December, the business rescue practitioners overseeing Optimum Coal announced the unit was being sold to Tegeta for R2.15bn.

The Tegeta purchase involved paying off much of Optimum Coal’s debts. Glencore agreed to pay R400m to settle the remainder of the borrowings, enabling the transaction to be finalised.

Glencore declined to comment on the specifics of the Tegeta deal.

It said it had been “working with the [business rescue practitioners] of Optimum Coal and all other stakeholders, including government, over the last few months in order to identify a sustainable solution for Optimum Coal”.

It said it was “pleased with the terms of the transaction”.

Oakbay said last week that in acquiring Optimum Coal it “prevented a liquidation that would have seen 3,000 people lose their jobs” but declined to comment about the allegations that Glencore was put under pressure by the department of mineral resources.

Oakbay did not respond to a question about whether the Guptas enjoy undue influence with the Zuma presidency, including favouritism in business deals such as the Optimum Coal transaction.

He also dismissed suggestions that the Guptas received any favours from him or the South African government, saying the family was treated like any other investor. “I’m not going to be bought by anybody,” Mr Zwane said.

The Gupta family moved to South Africa from India in 1993 and has various business interests, including media and mining.