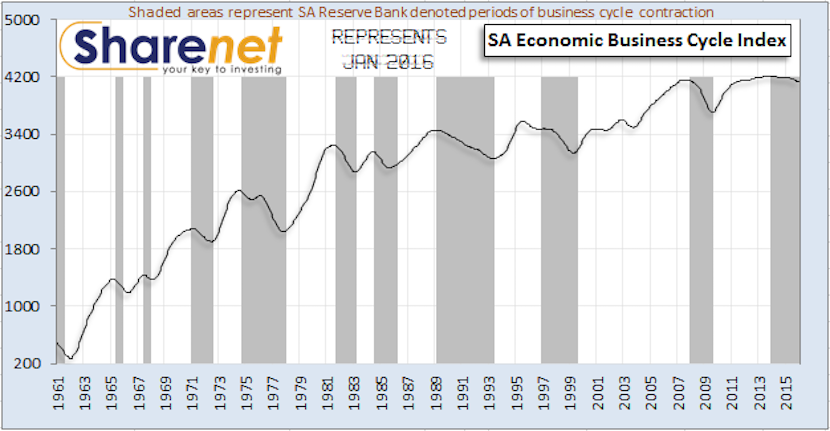 There is a standard joke in economic circles that by the time your central bank announces a recession you are already two-thirds into it. And given the most recent data from the South African Reserve Bank shows the business growth downward cycle has been ongoing for 27 months, there’s a slight cause for concern. Dwaine van Vuuren puts this into perspective and begs the question – are we headed for a local JSE bear market (as opposed to a dollar priced one?) He says there are reliable indicators that have stood the test of time over 5 decades in predicting bear markets (corrections of 25% or more.) Here are a few he mentions – business cycle recession, rising interest rates, foreign currency outflows, stretched valuations, and stock market momentum. And while not all the boxes are ticked, it’s still a close run call. Some fascinating insight. – Stuart Lowman

A little-known announcement by the South African Reserve Bank (SARB) occurred on 8th March 2016, in a detailed paper published on their web site.

In short, the SARB declared “Having duly considered all the available information, the final reference date for the upper turning point in the South African business cycle was established as November 2013”

This means that December 2013 was the first month of a new Business Growth Cycle Recession (downward cycle) which has been ongoing for some 27 months versus the 32 month average since 1974.

Secondly, it is common for central banks to pinpoint starts of economic slowdowns some 18-24 months after the fact. This is because they wait until absolutely sure before proclaiming business cycle turning points. There is never going back to “revise the dates”. There is a standard joke in economic circles that by the time your central bank announces a recession you are already two-thirds into it.

Our own representation of the SA Business Cycle which we update monthly for our PowerStocks Research subscribers, flagged the business cycle peak as December 2013, one month  after that flagged by the SARB.

More importantly, this was flagged much earlier, in April 2014 already:

The coincident probability of a business cycle downturn that we have been tracking monthly in tandem  is shown below.

As can be seen, this was a very agonizing slow slide into the downward phase of the business cycle, unlike previous growth recessions: 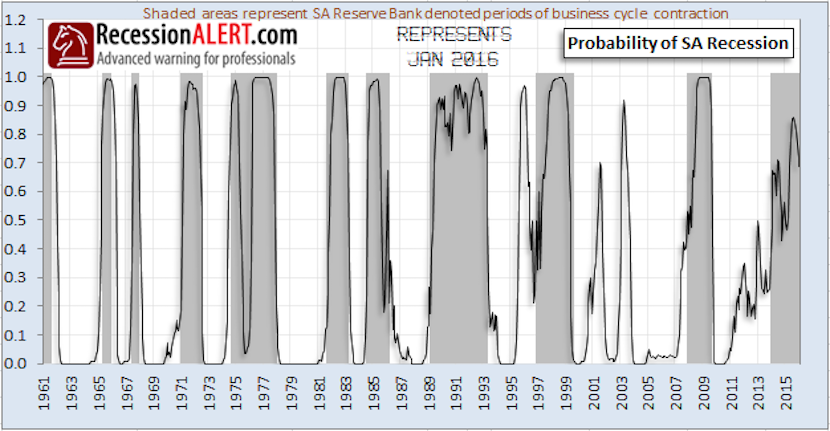 However, it appears the effects of the business cycle downswing on the JSE were muted due to the staggering 56% R/$ depreciation since December 2013, which propped up the JSE due to its estimated 60% foreign earnings components.

The JSE has gained 15% in the current downswing (6.4% per annum) however in US Dollar terms, the JSE has suffered a recession-class correction of over 45% since July 2014. 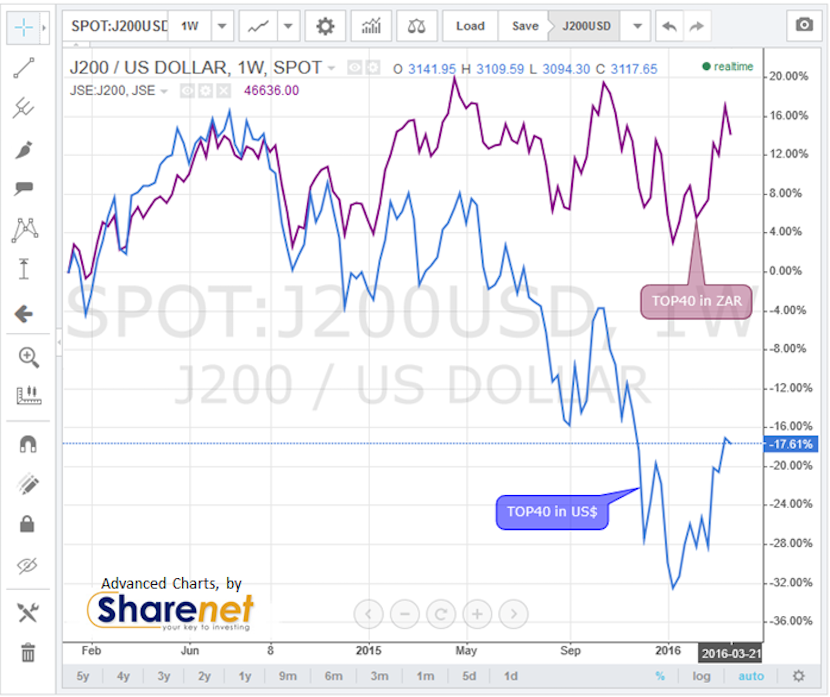 This begs the question – are we headed for a local JSE bear market (as opposed to a dollar priced one?) There are 10 reliable indicators that have stood the test of time over 5 decades in predicting JSE bear markets (corrections of 25% or more.) One of them is a business cycle recession, so we have a tick in the box there. The other is rising interest rates – tick and foreign currency outflows – tick. Stretched valuations on the JSE (extended P/E’s) are another – tick. However, stock market momentum ( a proprietary measurement of ours) is still mildly positive and we still have not seen a yield curve inversion. There are four other metrics that are still showing a bull market so we are not quite yet in bear market territory, but we are getting close.

The Rand depreciation under the Zuma Administration has been breathtaking, going from R8.36/$ in 2009 to a peak of over R17/$ during the Nenegate debacle.

The deterioration of the Rand during the Zuma administration now eclipses the annual compounded decline of 11.2% during the infamous PW Botha presidential term:

The iceberg waiting for the good ship SA Inc., is a ratings downgrade to Junk status. Although our bond yields are already pricing this in, I do not think the Rand has fully priced this in. Once we are relegated to Junk Status, global fund managers will be forced by their mandates to dump SA stocks and bonds at any cost and this flood of money leaving our shores will send the Rand well north of R20/$.

Many political figures welcome the Rand depreciation, saying it will boost export competitiveness (make our goods cheaper) but this theory has been thoroughly debunked by many analysts including our own analysis as described in an old Biznews article.

Our analysis goes so far as to assert that rampant, uncontrolled and own-goaled Rand deprecation such as we are experiencing now, promotes inequality and will affect the poor the most.

It is financial suicide not to protect your assets and/or income against Rand deprecation. There is a 6% per annum depreciation “baked into” the Rand/$ exchange rate no matter what (due to our inflation rate differential to the U.S) but as global headwinds and government policy missteps have shown, it is quite easy to see annual depreciation rates well north of 40%. To this end it is probably an option to consider local stocks with offshore exposure and not too dependent on the local economy (Rand hedges). Furthermore there are many instruments available on the JSE, denominated in Rands that benefit directly from Rand depreciation, such as the NEWGOLD Exchange Traded Fund (ETF), the DBX-EU and DBX-US ETF’s that track European and US stock markets or even the NewWave USD Exchange Traded Note (ETN). Be aware however that the Rand is experiencing a short term recovery from the Nenegate crises and so timing here can play quite a large role in short to medium term gains from hereon. It is not uncommon for corporations and private individuals to be sending money offshore or taking out forward cover en-masse at precisely the time the Rand rebounds from an extreme oversold position.

At any rate, the Zuma administration finally gets their full blown business cycle slowdown, as we stated they would last year.

In fact the Zuma administration has currently had 36% of their tenure within  the business cycle slowdown since the current downward phase now exceeds that of the 2008 Great Recession by some 18 weeks already.