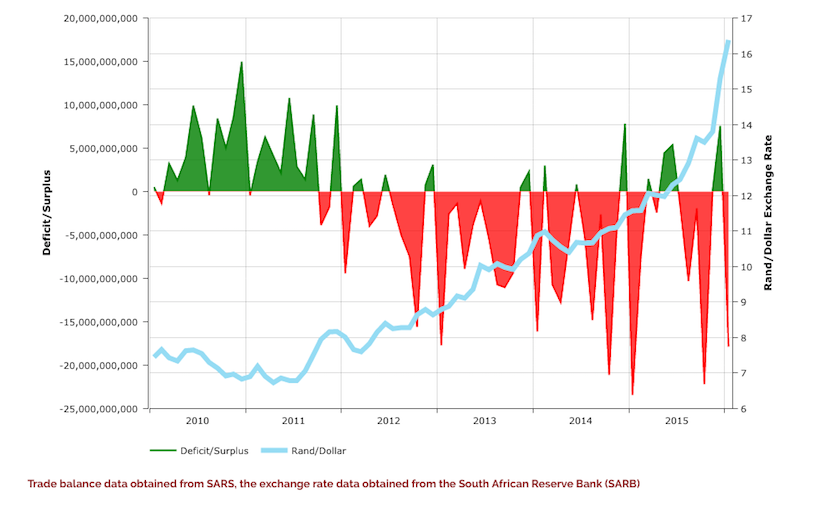 Economic laws are iron clad. But its theories are full of exceptions. Like the one which argues that a lower exchange rate improves a country’s trade balance with the rest of the world. Indeed, the opposite is the rational consequence when a country’s exports can be substituted, but its imports not. Statistical economist John Maynard takes a close look at the stats which show how the weak rand correlates negatively with South Africa’s trade account – coming to the the irrefutable conclusion that a weak exchange rate hurts rather than helps this economy. Worse, he has quantified it. To the tune of a staggering R150bn in the last six years. As for those who argue the perverse theory that bad political leadership, a la Nenegate, is actually good for the economy – they’re wrong. Dead wrong. – Alec Hogg

There is a myth that a weaker exchange rate leads to greater exports and lower imports and therefore improved trade balances.

The economic theory is easy to understand: As the exchange rate of Country A weakens, goods imported get more expensive and those exported become cheaper for Country B to import. While the theory is sound and may apply to some countries, this is certainly not the case for South Africa.

The graphic also tracks the Rand/Dollar exchange rate (light blue) per month during the same period. The Dollar is used as a benchmark as most of the world’s trade takes place in this currency.

Why does economic theory regarding a weakening exchange rate’s impact on trade balances not hold true for South Africa?

Is government and the South African Reserve Bank (SARB) aware of this? Do they realise that economic theory hammered into economics and business students does not necessarily hold true for South Africa?

Should we not try set policies to ensure a stronger currency?

That R150 billion amounts to basically two months in which SA imported goods and exported absolutely nothing. At the same time the Rand has depreciated from around R7.45 to the US dollar to over R16 a dollar by January 2016. Clearly a weaker exchange rate DOES NOT boost South African export earnings.

South African policy makers need to look at these kinds of issues in more detail and more proactively. In an ever evolving world, does economic theory and thoughts that were developed decades ago still hold true? If not, we better evolve and adjust our policies accordingly.