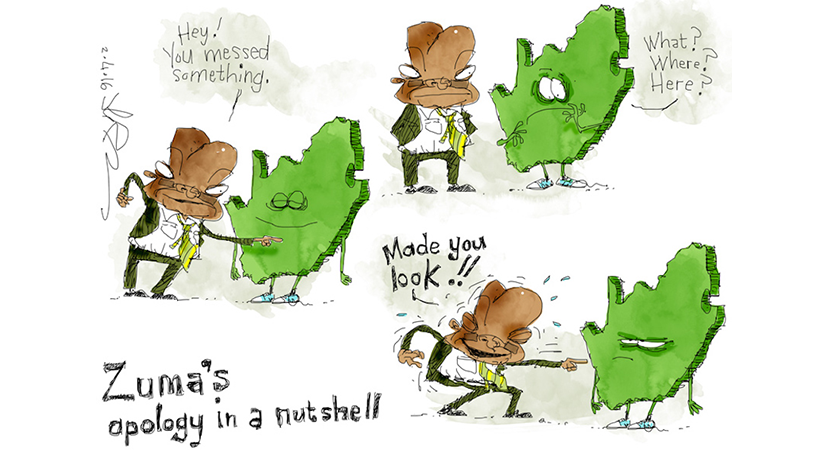 South Africa, which accounts for less that half a percent of global GDP, rarely hits mainstream global news. Even less so the editorial pages of the New York Times, the US’s most influential publication which boasts over 200 million online and print readers. So when the country features in the NYT twice in three days as it did this weekend, citizens of the young democracy on Africa’s southern tip should pay attention. On Friday, the NYT’s editorial board ran a powerful article headlined: “Time for SA’s Jacob Zuma to step down“. That was followed on Sunday by an even stronger opinion piece from author Mark Gevisser who urged his countrymen to join EFF leader Julius Malema with mass protests “in the streets” in an op-ed titled “Jacob Zuma must Go.” The message from the Free World’s most important media voice could hardly be clearer. – Alec Hogg

In its massively circulated Friday edition, the New York Times’s editorial board issued a call to South Africans to eject their deeply compromised President Jacob Zuma. Last night the US’s most influential media voice followed it up with a prominently published opinion piece urging that “Jacob Zuma Must Go.”

Friday’s editorial opened with the comment that “Cronyism, corruption and scandal have swirled around Jacob Zuma since before he became president of South Africa in May 2009, and the muck has only deepened since.” The NYT editors highlighted scandals around Nkandla and the Guptas, repeating ANC secretary general Gwede Mantashe’s warning that the country is turning into a “Mafia State”.

The NYT editorial continued: “Yet the ANC steadfastly continues to declare full confidence in the president. It is a shame that the ANC, the party of Nelson Mandela, is allowing its moral and political authority to be so grievously eroded by Zuma, instead of bringing his corrupt presidency to an end.”

It added: “In its ruling, the Constitutional Court said that in refusing to pay back the millions spent on his home, Zuma had “failed to uphold, defend and respect the Constitution as the supreme law of the land.” That has been the story of Mr. Zuma’s leadership. The president of South Africa is elected by Parliament, which is dominated by the ANC, so a withdrawal of support by the ANC national executive committee would be tantamount to a demand that Mr. Zuma resign. It’s time.”

Yesterday the NYT followed that forthright recommendation with a prominently published contribution from South African author Mark Gevisser who explained: “It was not the self-enrichment that outraged South Africans so much as the lengths to which Zuma went to avoid accounting for it, and thus tried to sidestep checks on the abuse of executive power. Since he came to power in 2008, Mr. Zuma has combined a Putinesque mastery of the darker arts of statecraft with insouciance toward anything beside his own enrichment and impunity.”

NYT readers were further told: “Zuma secured control of the ANC through intricate networks of patronage, but with local government elections due later in the year, a critical mass of his colleagues are finally viewing him as a liability. While Zuma remains popular in rural areas, especially his Zulu heartland, he is widely loathed in the cities. A powerful group of ANC veterans, too, has called on him to go.

“With Zuma seemingly determined to hold onto power, the Economic Freedom Fighters’ leader, Julius Malema, has threatened mass protests, violent if need be, to force him to quit. For now, we South Africans who are committed to nonviolence and the democratic aspirations of the Mandela era have little choice but to join Malema in the streets. We will, at least, be asserting the agency that the Constitution vested in us, and that the court affirmed last week.”