President Zuma visited Eskom HQ and triumphantly declared we will never see load shedding again this year. Incredibly, he even stated that soon we will have surplus electricity to export.

We agree, but not for the same reasons.

For over six months now we have been pointing out that the decline in the economy has resulted in a collapse in the demand for electricity as mines, factories, businesses, smelters etc. shutter operations. This has created the illusion, well used by the politicians of course, that Eskom’s turnaround strategy is working. The strategy is partially responsible for the improvement of course, but a massive 9% recession-class collapse in demand probably really saved their bacon. Eskom’s Generation Division has 13 coal-fired power stations with an installed capacity of 37 745 MW which was working flat out when load shedding issues first started.

A 9% collapse in demand therefore let them “off the hook” by a staggering 3,400 MW, equivalent to over four Medupi-class  production units, or two thirds of a full blown Medupi power station.

Electricity output is still languishing at levels last seen in the greatest economic recession in living memory in 2008. And the trend shows no sign of bottoming out. That’s because we are headed for a recession. In fact the SA Reserve Bank declared that the SA economic business cycle topped out in November 2013 already (See this article and this video) 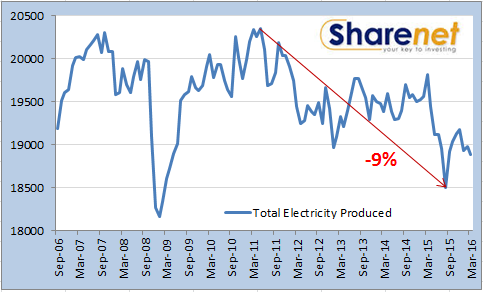