Many would be forgiven for thinking madness is a part of the South African government’s operative. Especially as there’s a constant thread that things will change by doing the same thing over and over again. And yet there’s gloating around the ‘perceived’ recovery the country saw after the 2008 recession, which was primarily driven by easy money. And as the tide recedes, so government is getting caught with its pants down. But let’s be honest, when has accountability ever been a part of the operative? One could argue, the Constitutional reprimand is already on the forgotten list. This stark reality was again highlighted in the quarterly jobs numbers which saw more than 350 000 people loss their jobs, with levels close to those of the 2008 recession. Dwaine van Vuuren digs a little deeper in the analysis below. Great read. – Stuart Lowman

The Quarterly Labor Force Survey from Stats SA revealed that the ranks of the unemployed grew by a shocking 521,000 people in first quarter of 2016 over the last quarter in 2015.

Over 355,000 of these were related directly to job-losses with the balance coming from growth in the labour pool (new work seekers that could not find jobs).

To say we have a jobs crisis is an understatement. And given we know the business cycle peaked in November 2013 (according to the Reserve bank) this is likely to get worse.

We pointed out a looming jobs crises a while back in the Biznews article “Job loss crises imminent” but even we were taken aback with the latest numbers.

The job-losses situation per province since 4Q15  is shown below: 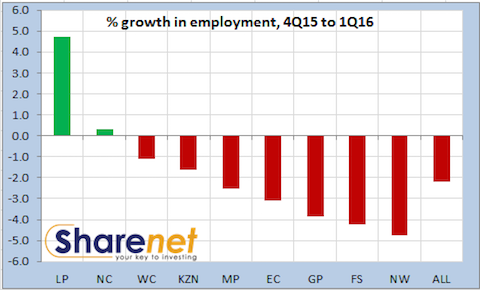 Limpopo province, the poorest province, showed just under 5% growth in jobs which is great news. Similarly, the Northern Cape managed to just avoid job losses. The Western Cape showed the smallest percentage job losses (just over 1% of its jobs were lost) whilst Gauteng, Free State and North West provinces showed shocking decreases in jobs by over 4% quarter on quarter (that’s 16% per annum when annualized). The national average was just over 2% of jobs lost.

These changes had resulted in an unemployment rate rising over 2% to a shocking 26.7%.

The ranks of the unemployed keep swelling at an accelerated rate with over 1.2 million extra unemployed since 1Q2010. This is a result of job-losses as well as a constant swelling of the labor pool with new entrants that cannot find a job. The economy shed over 1 million jobs in the greatest recession in living memory in 2008. Since 2010, when our economy was “expanding” the ranks of the unemployed have swelled by more than this – and according to the authorities we are not in recession. 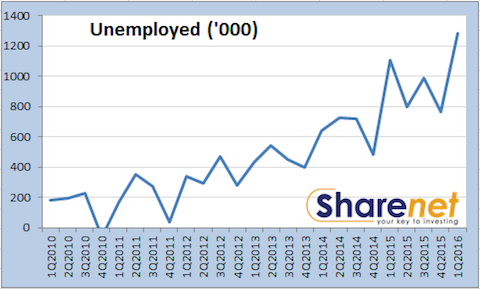 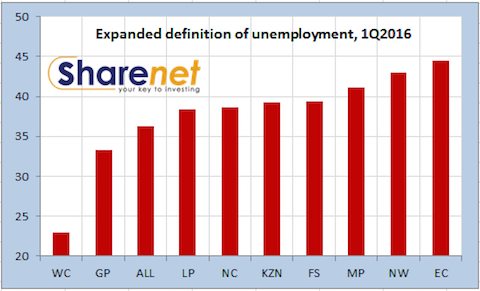 It is interesting that unemployment in the Western Cape is more or less the same between metro and non-metro, unlike most other provinces where the differences can be huge: 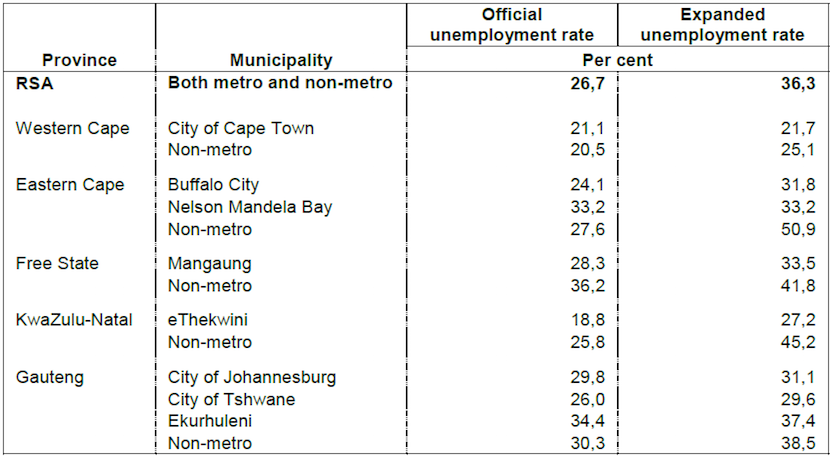 The lowest gap between official and expanded unemployment rates were observed in City of Cape Town (0.6 of a percentage point) and City of Johannesburg (1.3 percentage points).

The largest gap between the official and the expanded unemployment rates for metropolitans was observed in eThekwini and Buffalo City (8.4 and 7.7 percentage points respectively).