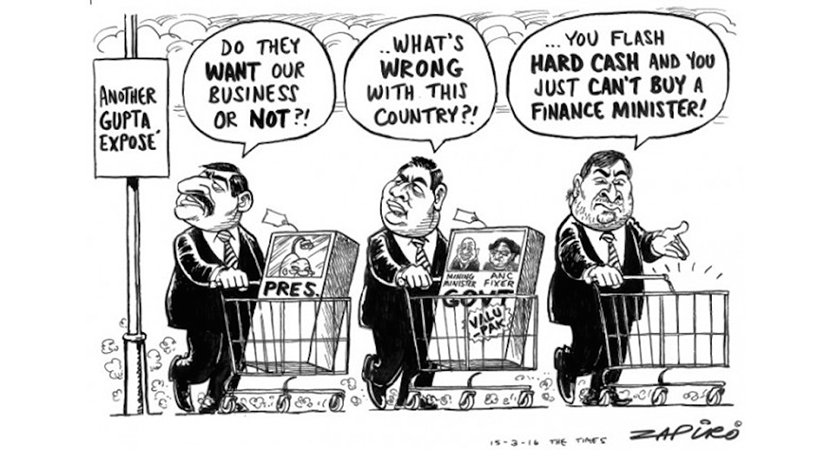 A few weeks back, an ANC insider warned not to expect anything from the political party’s highly publicised investigation into allegations of State Capture by the Gupta family. We were discussing some of the obvious individuals who should come forward – including some obvious business executives – me arguing they would use the one-off opportunity. The insider’s rational response was few would be prepared to expose themselves and their families to a flawed internal process which invited retribution. So the grip of the ANC’s Tenderpreneur faction is strong, and they have no intention of surrendering money and power acquired during the Zuma misrule. I incorrectly believed there was more of Mandela left in the party. But all is not lost. The one man prepared to make a written submission, former government spokesman Themba Maseko, has not abandoned the cause. This courageous outlier is gathering together like-minded individuals and encouraging them to make their submissions where they won’t be whitewashed. Hope springs. – Alec Hogg

Johannesburg – Former government spokesperson Themba Maseko has confirmed that he made the sole written submission to ANC secretary general Gwede Mantashe on how the Gupta family allegedly tried to capture the state.

Mantashe on Monday told journalists that only one out of the eight complaints made to him was handed over as a written submission after he said ANC members with complaints about interference by the Gupta family into state affairs should bring these to his office.

“The impression I get is he’s saying that unless more people come [forward], he will not investigate, but people must go to Chapter 9 institutions and make their submissions there.”

Maseko said he is part of an initiative by former directors-general to speak out against state capture, and will call on government to make a public inquiry. He could, however, not say which body the directors-general would approach.

“We are still working out the details.”

Maseko said although he had received “quite a few threats on Twitter of people saying they will investigate or expose me”, most public servants, retired public servants and members of the public were supportive.

Asked why more people did not came out to complain about alleged state capture, he said: “Let them speak for themselves.”

At least two sources, who did not want to be named, said Mantashe’s investigation had no real power and that might have deterred people from lodging complaints.

Maseko in March told Sunday Times a member of the Gupta family had tried to get him to help with a government contract involving their New Age newspaper.

#StateCapture If Maseko has confirmed that he did make a submission, this is going to raise questions about why Mcebisi Jonas did not.. SG

He also subsequently tweeted: “If all who have been summoned to Saxonwold [where the Guptas live] were to meet, FNB stadium won’t be big enough”.

Maseko’s comments at the time followed revelations by Deputy Finance Minister Mcebisi Jonas that the Guptas approached him last year to offer him former finance minister Nhlanhla Nene’s job before Nene was sacked.

Former minister of communications Siphiwe Nyanda, who called on Zuma to resign following the revelations of state capture, told News24 he did not make a submission because he was never directly approached by the Guptas.

Former MP Vytjie Mentor had made claims that she too was approached by the Gupta family for a ministerial position while President Jacob Zuma was in the same house.

Zuma is close friends with the Gupta family, who are business people.

ANC spokesperson Zizi Kodwa could not be immediately reached for comment. – News24