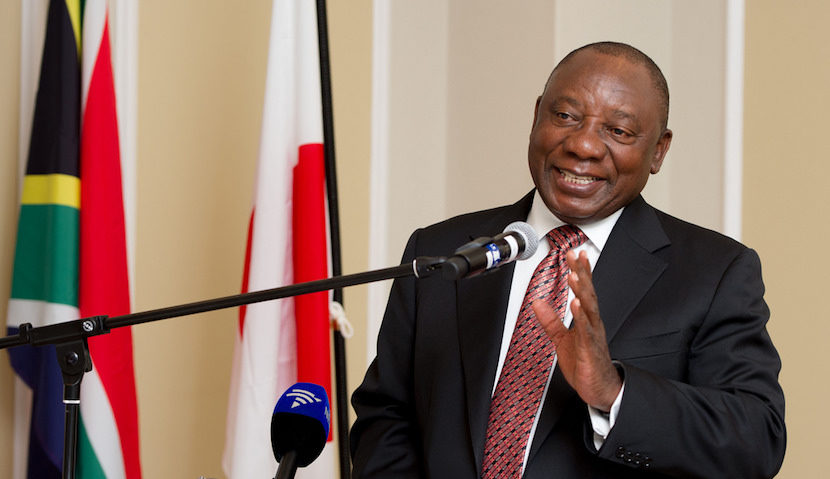 When superstar musician Paul Simon visited South Africa in 1985 to collaborate with locals on what became his wonderful Graceland album, he discovered rays of hope despite the great despair. His opening track on the compilation, Boy in the Bubble, reflects the artist’s view that despite all SA’s challenges, “these are the days of miracles and wonder.” SA Deputy President Cyril Ramaphosa reminds me of this song. Caught up in an Administration which regularly reloads just to shoot off another foot, his public discomfort is often acute. Not surprisingly, because Ramaphosa’s background in labour and business plugs him into a modern world where South Africa’s failings in political governance and basic education puts it at a staggering disadvantage. But Ramaphosa remains hopeful, believing miracles are possible when the nation’s key players pulls in the same direction. And he believes a start has been made – that Government, business and labour are beginning to sing from the same hymn sheet, Maybe Nenegate and the consequent threat of a ratings downgrade had upside after all. – Alec Hogg

“In support of the nine-point plan announced by President Jacob Zuma in the State of the Nation Address last year, government is working with business and labour on several critical interventions in the economy,” he said.

Ramaphosa emphasised how important it is that SA business, labour and Government speak in one voice, something, in his view, which has been happening.

“We have demonstrated common purpose and a shared sense of urgency,” he said.

“As we work to overcome the dreadful legacy of colonialism and apartheid, we must confront the immediate challenges of weakened global demand, lower commodity prices and the impact that these have on the growth of our economy,” he said.

“We must also contend with electricity supply challenges, the effects of a devastating drought and constrained public finances.

“Established business is important too. It provides economies of scale, access to markets, a wealth of expertise and the ability to mobilise capital.

It has both a responsibility to, and an interest in, supporting the development of emerging small business through procurement opportunities, access to finance, skills development and strategic partnerships.”

He praised the Gauteng provincial government for involving all stakeholders in the indaba.

“Gauteng is forging a new economic path and places inclusive economic growth at the centre of efforts to build a better society,” said Ramaphosa.

Ramaphosa: it was through working together (gov/bus/lab) that we convinced rating agencies not to junk us (BDay). So what is our second act?

He is optimistic about the indaba being about building enduring partnerships between Government, business, labour and communities for long term growth and employment creation.

“The Gauteng provincial government has recognised that inclusive growth can only be achieved through partnership and collaboration – through a shared vision and a common programme for growth. We applaud the Gauteng government for this initiative,” said Ramaphosa.

“This Indaba aims to give effect to the National Development Plan (NDP). In doing so, it recognises that the NDP is a plan for the nation, not just Government.”

He called Gauteng the manufacturing hub of the country and sees great opportunities for upgrading the contribution of manufacturing to the GDP of Gauteng beyond the 16% to 25% and beyond.

He emphasised that SA needs an economy that serves the interests and meets the needs of the people and for that investment in infrastructure is key.

“Today, we are in the midst of the largest infrastructure build programme yet undertaken in the history of this country. We are investing in water, energy, transport, logistics and information technology. We are investing in hospitals, universities, colleges, schools and clinics,” said Ramaphosa.

“Not only does this investment create work opportunities and stimulate economic activity. It also reduces the cost of doing business and improves our capacity for faster growth.”

He also emphasised that Government has undertaken an intensive campaign to massively expand local procurement. Futher more, the black industrialist programme is being introduced to unlock the potential of black entrepreneurs and contribute to the reindustrialisation of SA’s economy.

“We have significantly expanded our focus on small business development. We are working to improve financial and other support, broaden access to market opportunities, and remove regulatory obstacles to their growth and sustainability,” he said.

“Central to the economic future of our country is the development of the skills of its people. Ensuring access to quality education is therefore the most significant, effective and enduring investment that we can make.” – Fin24