There’s just no easy way to paint the current picture of South Africa’s economic setting. The International Monetary Fund has slashed the country’s growth forecast for 2016 to 0.1 percent from a previous 0.6 percent. In its latest report, it said the country needs decisive action to revive growth (full report below). And while the IMF has seen improvement, the vulnerabilities have elevated, fuelled by global events like Britain’s decision to leave the European Union. Some light relief for consumers though, the IMF sees no need for the country to increase interest rates as inflation seems to be under control, despite sitting outside the 3-6 percent target band. The organisation also expects growth to rebound to 1.1 percent in 2017 and 2 percent in 2018, still a far cry from the 5 percent needed to close the jobs gap. The South African government has responded (full statement included). – Stuart Lowman

The central bank doesn’t have to increase borrowing costs “unless core inflation or inflation expectations rise,” the Washington-based lender said in a report released on Thursday. “The impact of past policy hikes is still filtering through, and the weak economy should keep inflation contained.”

The Monetary Policy Committee has raised its benchmark repurchase rate by 125 basis points since last July to 7 percent as it sought to steer price growth back into its 3 percent to 6 percent target band. While inflation slowed to 6.1 percent in May, it will only return to the target by the third quarter of 2017, according to the Reserve Bank. Policy makers remain concerned about rising inflation expectations, Deputy Governor Daniel Mminele said on Wednesday.

While inflation will remain elevated due to the base effects of fuel prices, higher food costs and currency weakness, it will remain contained, the IMF said. Price growth will probably peak at around 7 percent in the fourth quarter of this year and ease to 5.6 percent by the end of 2017, the lender said.

The IMF cut its economic growth forecast for South Africa for the third time this year and now projects expansion of 0.1 percent compared with 0.6 percent forecast in April. The lender projects 1.1 percent growth for 2017. The central bank reduced its 2016 growth forecast to 0.6 percent from 0.8 percent in May, and the government said in February gross domestic product will expand by 0.9 percent.

“In our projections we don’t have a recession, we have an improvement in growth starting from the second quarter of this year,” Laura Papi, the IMF’s mission chief for South Africa, told reporters in a conference call on Thursday. “The risks of a recession are obviously significant, because we are very close to zero already in our forecast and you could have another quarter of negative growth.”

GDP contracted by 1.2 percent in the three months through March as farming and mining output slumped due to low commodity prices and the worst drought in more than a century. The last time the economy was in recession was 2009. 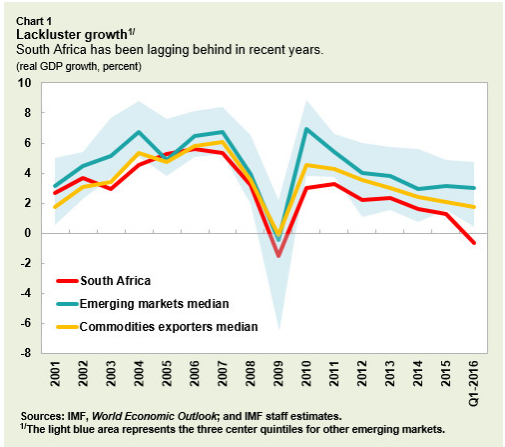 “While cutting interest rates would be unlikely to boost growth as policy uncertainty and reduced investor confidence will likely constrain private spending, additional monetary tightening would further depress growth,” the IMF said in its report.

The Reserve Bank will announce its next interest-rate decision on July 21.

In his February budget, Finance Minister Pravin Gordhan pledged to narrow the fiscal deficit and limit gross debt to 50.5 percent of GDP by 2019 by curbing spending and raising taxes. These targets could be challenging to achieve if its growth projections materialize, the IMF said. Gross debt will probably increase to 52.6 percent of GDP in 2017, the lender said.

“National Treasury forecast is more positive compared to the IMF,” the Treasury said in an e-mailed statement. “In the immediate term, we expect growth and employment to be supported by several structural reforms and targeted government interventions.”

S&P Global Ratings kept South Africa’s credit assessment at BBB-, one level above junk, on June 3 and warned it could cut the nation’s debt evaluation unless more is done to foster growth and combat political and labor instability. Fitch Ratings Ltd. also kept its evaluation of South Africa’s debt at one level above junk last month and Moody’s Investors Service left the nation at two levels above non-investment grade in May. S&P is due to announce its next rating assessment in December.

The market appears to have mostly priced in a credit-rating downgrade to junk, the IMF said. The impact of a downgrade will be mitigated by the government’s low level of foreign-currency debt, it said.

While South Africa’s external competitiveness remains a concern, the flexible exchange rate is a positive, the IMF said. The Reserve Bank should use opportunities to increase its foreign reserves, the lender said. Gross reserves were $46.4 billion last month.

The rand strengthened by 0.5 percent to 14.6680 per dollar at 4:20 p.m. in Johannesburg on Thursday. Yields on rand-denominated government bonds due December 2026 fell six basis points to 8.75 percent.

Harare – South Africa should urgently reform state-owned enterprises, reduce policy uncertainty and speed up reforms, the International Monetary Fund (IMF) said on Thursday, noting however that there has been “progress” in dialogue between the government, labour and business.

The IMF has cut its economic growth projection for SA – now the continent’s third-largest economy – to 0.1%, fresh evidence of the economic turmoil that the country faces.

However, SA remains Africa’s most industrialised country and the most attractive destination for foreign investments aimed at Africa, according to an EY index released in May.

The IMF noted that “authorities are making progress in the recent dialogue between government, businesses, and labour, which could catalyse reform implementation” and breathe fresh life into floundering growth.

The country frequently suffers job protests by workers in the mining sector, one of its most lucrative industries. The protests usually centre on wages for the mineworkers employed in a sector with the world’s largest reserves of platinum and vast deposits of gold and other minerals.

The IMF also urges SA to intensify momentum on its reform agenda. This would help boost employment creation in the private sector that has often complained of policy uncertainty. 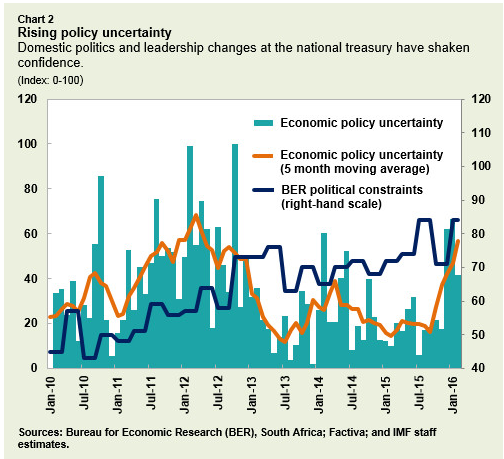 “To generate reform momentum, the report suggests government should implement a focused set of tangible measures with a priority on boosting private sector employment.

“Clarifying the regulatory environment in the mining sector and reforming state-owned enterprises, for example, would reduce policy uncertainty and increase confidence and trust even in the short term,” said the IMF’s Yi Wu and Laura Papi in a report released on Thursday.

It said growth in SA slowed to 1.3% in 2015, the slowest pace since the global financial crisis of 2008. SA’s growth trajectory in 2015 was also below that of most emerging market economies and commodity producing nations.

“The IMF projects 2016 growth at 0.1 percent, which would mean a second year of falling per capita incomes. A muted recovery is expected from 2017, approaching 2-2½ percent in the outer years as shocks dissipate and more power plants are completed; with these projections, unemployment will likely rise over the medium term.” 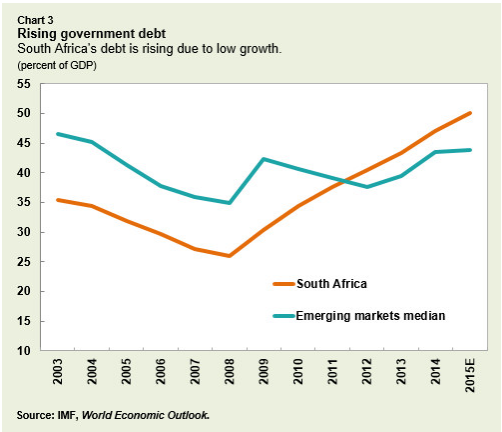 Economic headwinds South Africa is facing could be amplified by “linkages between capital flows, the sovereign, and the financial sector, especially if combined with sovereign credit rating downgrades to speculative” grade.

Additionally, Britain’s decision to leave the European Union has further increased risks for SA, the IMF said, “as there are extensive financial linkages between the United Kingdom and South Africa and sizable trade linkages with the EU as a whole”. – Fin24