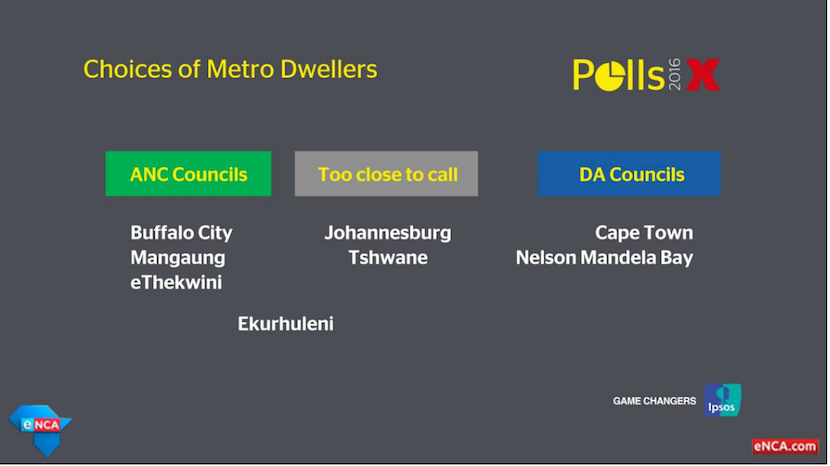 The turnaround in the eNCA/IPSOS pre-election polls is startling. After weeks of reflecting a handy lead for the official opposition DA in three keenly contested metros, last night’s final poll showed a swing back to the ruling ANC.

Perhaps there is more to this. For one thing, public criticism of the polling methodology may have had an impact, with the bulk of what were previously termed “unknowns” having landed with the ANC. This looks eerily similar to Brexit polls which incorrectly swung from “Leave” to “Remain” in the days before the UK’s decision to leave the EU by a significant 52-48.

On the other hand, the polls might also be reflecting the impressive last minute push by the ANC. This included the weekend’s Johannesburg rally where ever popular Winnie Mandela-Madikizela helped bolster support. The news reports did note, however, that the stadium started emptying as ANC President Jacob Zuma started to speak.

This is the final forecast we will get of likely voting patterns. Polls are not allowed within 48 hours of a South African election. 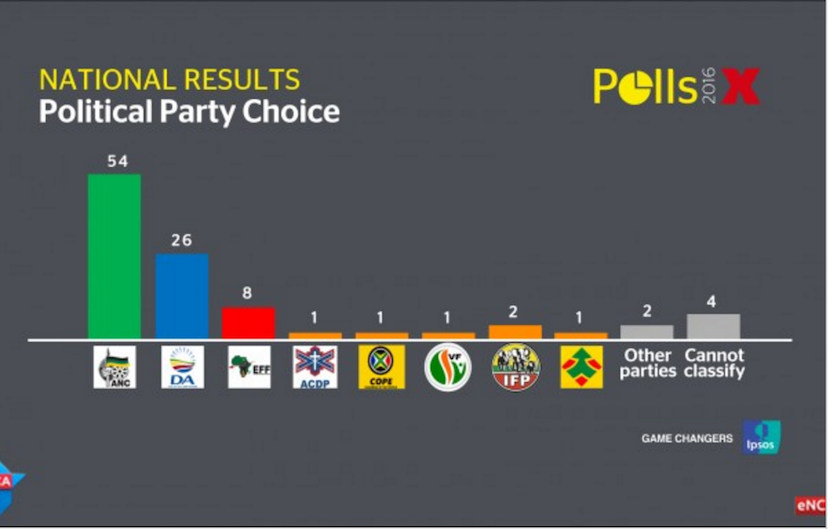 The national breakdown (above) of the final polls show a suspiciously low 8% national vote for the EFF after Julius Malema’s party had previously tracked higher. This is hard to swallow given the party’s obvious progress since it achieved 6.35% of the national vote in the country’s 2015 general election. Something in double digits for the EFF looks more likely.

Despite its strong comeback in the past week, even these more optimistic numbers show the ANC’s decline over the past two scandal wracked years. Zuma’s party gathered 62.15% of the national vote in May 2014. Even by these improved forecasts it is expected to record no more than 54% – a decline of eight percentage points.

The IPSOS/eNCA poll confirms momentum continues to build for DA leader Mmusi Maimane’s “blue tsunami”, although according to the latest numbers do not have quite the strength previously reported. The DA’s national slice is predicted to reach 26%, almost four percentage points above the level it held in 2014 (itself up 5.5 percentage points from 2009). Given what we’ve seen on the ground, it would be no surprise to see the DA’s final number a few percentage points higher than the projected 26%.

If these final polls prove accurate, the obvious conclusion pundits will draw is that on the current trajectory, the ANC is likely to lose its overall majority in the 2019 general election – an unimaginable suggestion ahead of the installation of the Zuma Administration. 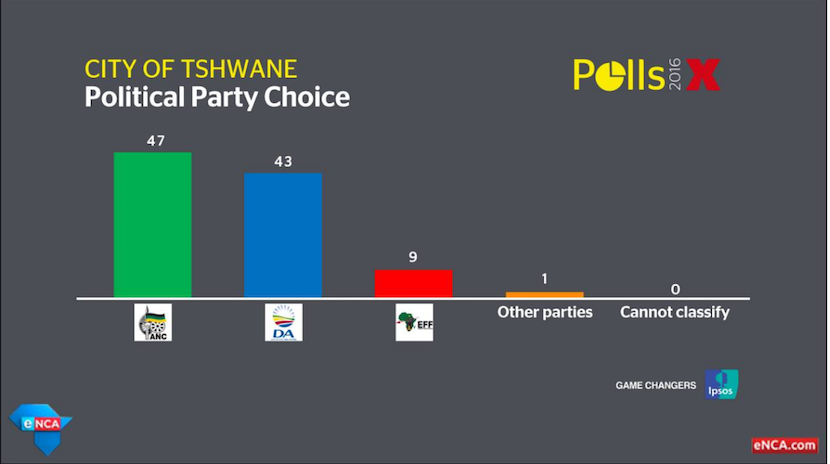 Among the big three “battleground” cities, the largest turnabout of the past week is in Tshwane where the final polls reflect a massive rebound for the ANC, after trailing the DA for weeks. Critically, even with this late improvement, the ANC is still expected to end up shy of the 50% majority required to continue governing – opening the door to a DA and EFF coalition.

Both the leading opposition parties have intimated they are open to working together where doing so will eject the ANC. Both believe their immediate priority is to eradicate corruption which has become endemic in many municipalities after two decades of cadre deployment accompanying ANC rule. The way things are stacking up, discussions between the DA and EFF could become a lot more serious later in the week. 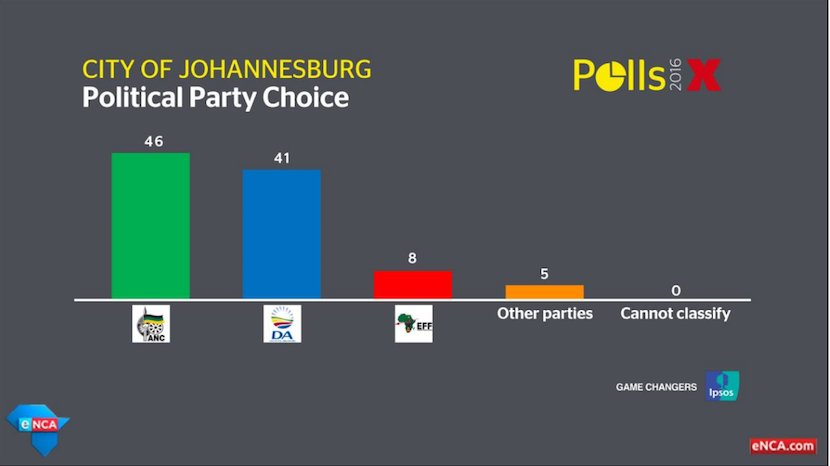 The Johannesburg race is also too-close-to-call with the polls making it a tight race between the ANC and DA in South Africa’s commercial centre. Here, however, a DA/EFF alliance might not be enough to eject the ANC, suggesting the smaller parties (Agang, COPE, Inkatha, ACDP, VFplus) could be elevated into the status of kingmakers. 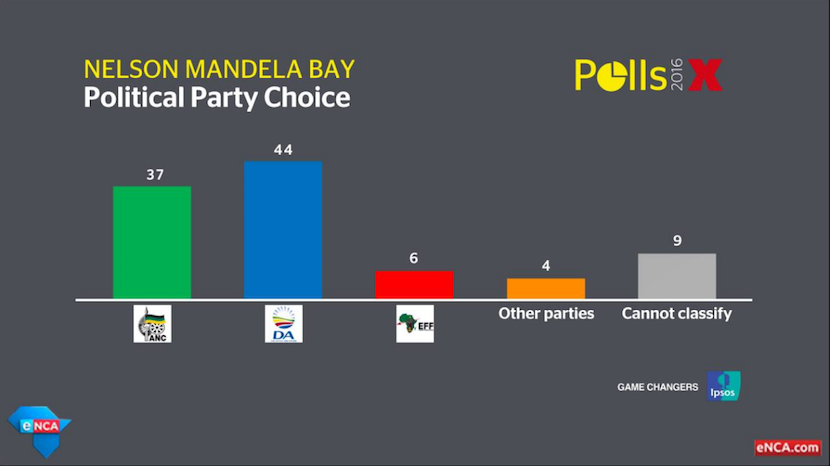 The polls suggest political horse trading is also possible in Nelson Mandela Bay where the final numbers put a DA/EFF combination right on the 50% required. Barring a miracle, this is the one metro where political appointees of the ruling ANC are sure to be soon clearing their offices.

The final polls suggest despite internal divisions in eThekwini (Durban), ANC rule will continue there. Similarly in Mangaung (Bloemfontein) and Buffalo City (East London). Ekurhuleni (East Rand) will probably stay under the ANC but it is one of the metros where an upset is possible.

At the other end, the DA appears certain to retain Cape Town and become the ruling party, perhaps in coalition, in Nelson Mandela Bay (PE). Pollsters have the Gauteng twin cities Johannesburg and Tshwane (Pretoria) as too close to call.

After a long two decades, competitive politics has finally arrived in South Africa, a development likely to be welcomed by both domestic and foreign investors.