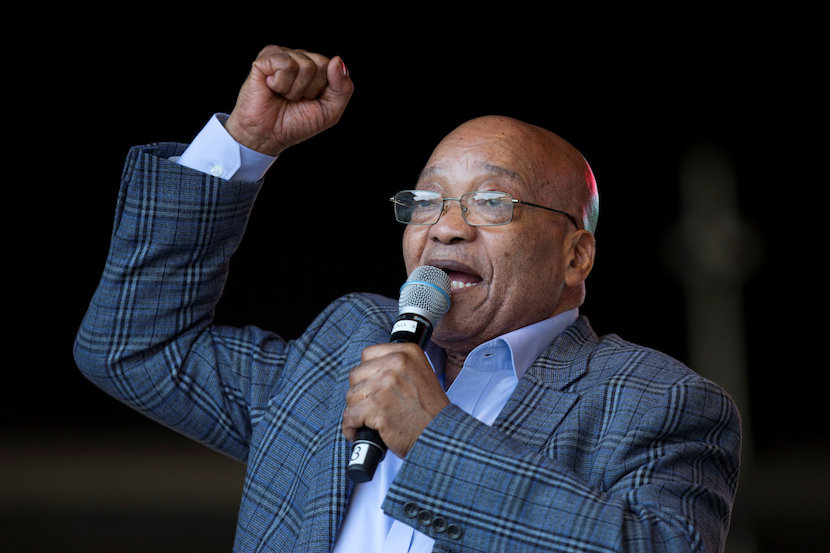 President Jacob Zuma’s ambition to exercise absolute control over the resources of the South African State won’t happen without a fight. After years in the shadows, the country’s big businesses were thrust onto centre stage during the Nenegate disaster last December. Intervention by business leaders helped stabilise a situation that threatened to spin out of control, forcing Zuma to reappoint as Finance Minister the only member of his cabinet with credibility among international investors. But events of the past two days have sparked fears that Zuma is back to his old tricks. Yesterday morning Business Day confirmed that a supine ANC is vesting all State Owned Enterprises power into his office. Next his fiercely loyal Hawks summoned Finance Minister Pravin Gordhan in the final step before arresting him on trumped up criminal charges. International investors have taken fright. And in the strongly worded statement issued this afternoon, Business Leadership South Africa warns that Zuma is taking the country back to the “edge of the abyss.” We ask again – Nenegate Two anyone? – Alec Hogg

Our country has made great progress over the last eight months.

On the economic front, your State of the Nation speech and Finance Minister Pravin Gordhan’s budget, together with CEO led initiatives and joint action between government, business and labour, have begun to restore investor confidence in South Africa.

On the political front, the free, fair, and effective conduct of our municipal elections, has strengthened our democracy. The dignified acceptance of results by both winners and losers is clear evidence to the world that we are a strong, functioning constitutional democracy. The highly transparent and inclusive process of selecting our country’s new Public Protector has provided further evidence of the strength of our constitutional institutions.

All of this progress is threatened by the possible charge, or even arrest, of Finance Minister Gordhan.

No one is above the law. However, the present Hawks investigation of the Minister’s former role as SARS Commissioner lacks any legitimacy or credibility.

It is shocking that our national collective effort to avoid a ratings downgrade and to restore inclusive economic growth is now being so insidiously subverted. If this sinister behaviour is allowed to continue the consequences will be devastating for our economy, and will fatally undermine our national efforts to address poverty, inequality, and unemployment.

#zumanomics Protecting rule at all cost even if it means you are chief of a pile of rubble.

If there is to be an investigation into this issue, we would urge that this be conducted by a credible institution such as the Public Protector.

Mr President, our country stands once more on the edge of the abyss.  We urge you to act to preserve the unity and progress we have achieved since December by ensuring an end to the harassment, intimidation, and undermining of the leadership of our most important economic governance institutions.