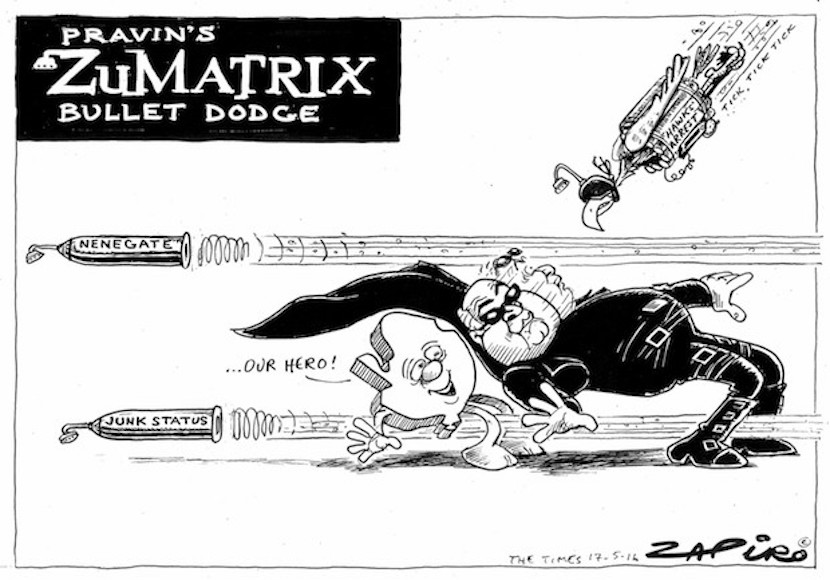 The first requirement of a good leader is consistency, an ability to provide a safe pair of hands. As Jim Collins explained in Good To Great, those who quietly get on with the job massively outperform the charismatic. It’s a reality usually exaggerated in political leadership. Qualities required to get elected are diametrically opposed to what is needed to run a country well. South Africa’s President Jacob Zuma personifies this fact. A charming exterior hides an obsession to accumulate dirt on those he would have serve him – and ruthlessly apply the pressure to get his way. Overlay the inconsistency of an erratic thought process and the ANC has a leader who has become a recipe for disaster. Just how big a disaster is what investors are continuously mulling over. In the world’s financial capitals, the view is that as long as Finance Minister Pravin Gordhan is around to stem the worst of the Zuma camp’s excesses, South Africa is worth considering. But take Gordhan away and, they believe. the plundering is likely to accelerate Zimbabwe-style. At that point all bets will be off as money rushes for the exit. Add that in developing countries it is politics, not economics, which determines capital flows and it’s easy to understand why the Rand got a 50c smack yesterday when the market learnt Gordhan has been summonsed to appear before Zuma acolytes who possess the power to jail him. Insiders warn that after a supine ANC refused to address the reason for the municipal election setback, Zuma has stopped caring about consequences of his actions. They say he has now entered full scale crash-and-burn mode. Emboldened by the support of his bloated cabinet, Zuma has now taken personal control of the parastatals where much of the plundering occurs – Eskom, SAA, Denel, SABC, etc. It looks like he now wants to permanently rid himself of the checks on these obvious taxpayer-funded excesses that Gordhan’s Treasury tries to impose. Nenegate Two anyone? – Alec Hogg

Cape Town – The rand broke through the R14/$-level at the close of business in New York, but returned to R13.93/$ on news that Finance Minister Pravin Gordhan has to report to the Hawks amid the ongoing Sars Wars debacle.

Gordhan’s role as commissioner of the SA Revenue Service when an undercover investigation unit was established is being questioned by the Hawks, who are investigating whether the unit went rogue and performed illegal activities. Some believe these allegations were cooked up as the unit was allegedly sniffing down the wrong Nkandla rabbit hole.

The market sees Gordhan as key to South Africa’s fiscal reform and discipline and his removal from this position will likely raise the possibility of a ratings downgrade to junk status.

“If Gordhan was to go, I think there has to be a very real chance that we will be downgraded in December,” said Umkhulu Consulting’s Adam Phillips. “Maybe they won’t wait to put us out of our misery.

“In the space of three hours all the good work (aided by yield players) has been undone.”

“It was probably a bit like sitting in Utopia with the rand having strengthened more than R2.00 this year,” he told Fin24. “There we were at 17:30 ending off another day of rand strength and along comes the Daily Maverick story.”

The online publication broke news that Gordhan – and a few other former Sars members – had to be at the Hawks offices on Thursday to receive warning letters, a precursor to an official charge.

In less than 24 hours, all the benefits of a rising Rand have been negated by the return of political risk & in #SouthAfrica. #PravinGordhan

“I think if Gordhan is guilty of doing anything wrong, I think he would have bailed out of politics long ago,” said Phillips. “It can only be the ongoing spate between the president and the Treasury. It is ironic that President Jacob Zuma has taken over certain SOEs to sort them out and this now comes out.

“I just cannot believe that Gordhan has done anything wrong and Zuma is playing a dangerous game because it is for such a reason that he and his party lost plenty of votes in the local elections.

“The 29th of July was the last time we were at 13.99 and I am sure there are going to be some nervous importers and offshore yield players around on Wednesday and we are not even sure if there is a charge sheet and exactly what Gordhan and other Sars officials have done.

“This news will mean we see nervousness for the rest of the week,” he said.

Woke up this morning and realised it's 9 December 2015.#PravinGordhan #Nene

Phillips said Wednesday’s release of South Africa’s consumer price inflation data that measures inflation will not have an impact on the rand in this context. However, the US Federal Reserve’s interest rate announcement on Friday will be the big mover.

Until then, Phillips said the rand is more or less safe. “SA will be cocooned in its own ‘risk off’ scenario until some facts come out,” he said.

However, he said: “I think we need to get through the next two before we start even looking at Yellen’s speech. The market might not even be told what is really going on, which will just make operators even more nervous.” – Fin24

Govt sheds light on Zuma’s role as head of SOCs

Cape Town – The government clarified President Jacob Zuma’s role in the leadership of state owned companies (SOCs) on Tuesday, amid allegations of state capture where the Guptas use their friendship with Zuma as a way of winning contracts in the critical sector.

The Guptas have been central figures in the narrative of state capture, with allegations of using undue influence to get preferential treatment at SOCs such as Eskom. They ardently deny such tactics. The Guptas have interest in uranium too, while Zuma is pushing for a 9.6GW nuclear programme – which requires uranium.

There is also Zuma’s close friendship to South African Airways chairperson Dudu Myeni, who Finance Minister Pravin Gordhan allegedly wants removed before he will give a R5bn guarantee to the airline. It requires this so that it can publish its one-year late annual financial report – now due on September 15.

Analysts are linking Zuma’s new role as head of SOCs with news that Gordhan and some of his former Sars staff have to report to the Hawks on Thursday to receive letters of warning – a measure usually followed by official charges. This relates to the ongoing Sars Wars – a term used to describe the battle between Gordhan and SA Revenue Service Commissioner Tom Moyane, who spearheaded a probe into an investigation unit established under Gordhan.

Zuma going for a total power grab #SOE's #Treasury while nation is destructed by elections.

With the country on the precipice of junk status, the radical reform of SOCs was seen as key to signalling the country had its finances under control.

Reports on Tuesday said Zuma would now head up all SOCs, which got many economic and political commentators reaching for their keyboards. This came out of the briefing of the Cabinet Lekgotla on Monday by Minister in the Presidency responsible for Performance Monitoring and Evaluation, Jeff Radebe.

However, he said this needed clarification in a statement on Tuesday evening.

“To avoid any confusion it is confirmed that the Inter-Ministerial Committee (IMC) chaired by Deputy President, Mr Cyril Ramaphosa is responsible for overseeing the stabilisation and reform of state-owned entities,” Radebe said.

“One of the reform measures currently being developed by the IMC is the establishment of a Presidential SOCs Coordinating Council, which will allow for better oversight and coordination of state owned companies.

“This measure is part of a comprehensive overhaul of the shareholder model of state-owned companies being led by the IMC in line with the recommendations of the Presidential Review Committee on State Owned Entities.

“The Cabinet Lekgotla mandated the IMC to continue with the implementation of these recommendations.”