The JSE Top40 is heavily overweight rand-hedge stocks, which usually points to a rising stock market on a weaker rand. They are referred to as the Big 5 – Naspers, BHP Billiton, British American Tobacco, SABMiller and Richemont. Analyst Dwaine van Vuuren strips out these five stocks from his Top 40 research, and it highlights a worrisome bear trend. – Stuart Lowman

In prior discussions we have repeatedly warned of selective divergence occurring on the JSE, whereby a smaller and smaller pool of large cap Rand Hedges are propping up the JSE. The causes of this and why it is dangerous are discussed in depth.

We see that the Big-5 still dominate JSE market action, and together with the overall SA TOP-40 are putting in higher highs and higher lows – behavior expected from a bull market trend.

However, we can see that the TOP-40 excluding the Big-5 peaked 16 months ago in April 2015 and is printing lower highs, which is behavior more consistent with a bear market.

The table below shows the returns from the various indices over various time periods:

The TOP40 excluding the Big-5 is thus more in tune with the current economic woes we find ourselves in, since a massive chunk of offshore earnings has been removed from it, leaving it exposed to mostly earnings from JSE shares operating in our local economy.

The chart below shows how the Big-5 still dominate the weighting of the J200:TOP40 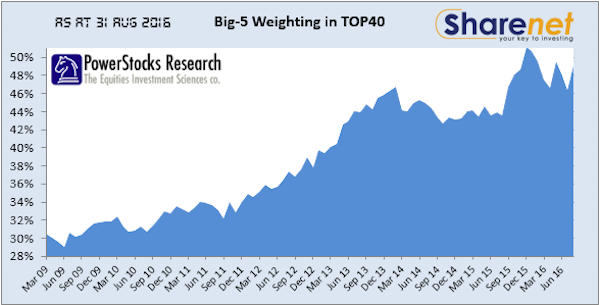 The chart below shows the huge divergence in Price/Earnings ratios (P/E’s) of the SA TOP40 and that excluding the Big-5. The SA TOP40 is at ridiculous life-time high P/E’s but the P/E of the TOP40 ex the Big-5 is actually declining (becoming cheaper) and below the long term mean of 16: 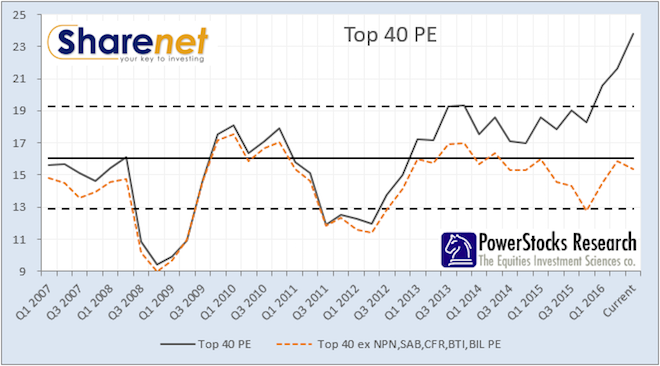 “Geek note” on our index construction methodology: The FTSE/JSE Top 40 Index was reconstructed using quarterly constituent data and making adjustments for index changes and corporate actions. The index uses free float-adjusted market capitalization methodology to determine the weight of each share in the index. The weight of a stock in a free float-adjusted market capitalization weighted index equals its market-cap (shares in issue times share price) weight multiplied by a free-float adjustment factor (a number between 0 and 1 representing the fraction of shares that float freely). This same methodology is used to create a sub-index that contains a subset of the parent index’s constituents. Each constituent’s free-float adjusted market capitalization is used to calculate the weight of each constituent in the sub-index. The new index weighting combined with each constituent’s total return enables us to compute the total return for the sub-index, and compare this to the total return of the actual (parent) index.