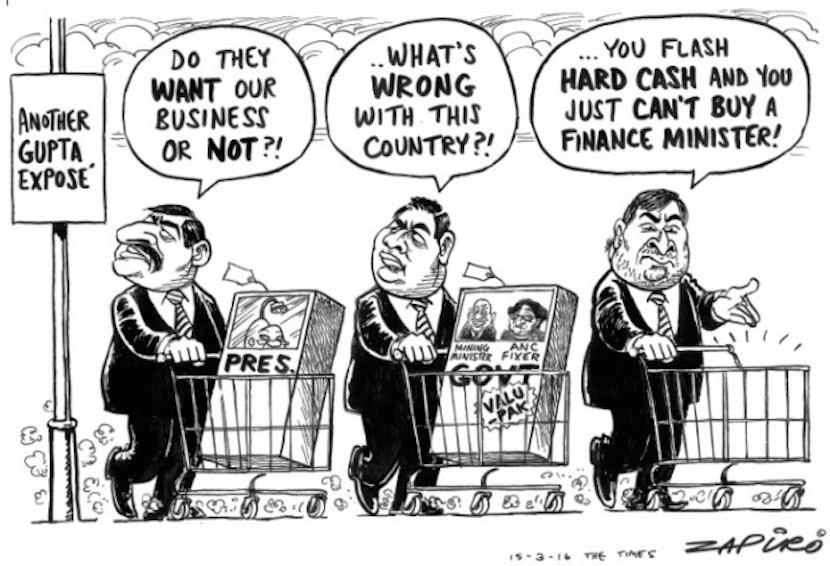 Six months ago, seasoned political analyst Dr Somadoda Fikeni described the crony capitalist Gupta family as “over-excited, grotesque amateurs.” Evidence presented to the Pretoria High Court on Friday confirms that Fikeni nailed it. It is now pretty obvious the Indian immigrants had already overplayed their hand almost a year ago with the Nenegate debacle. But even after doing a moonlight duck to a half a billion rand mansion in Dubai, they kept pushing the envelope. Their brick wall has come through an attempt to suck incorruptible Finance Minister Pravin Gordhan into the web. After sticking meticulously to the law, Gordhan has now blown the lid off the family’s nefarious dealings in spectacular fashion. He lodged an explosive affidavit with the Pretoria High Court on Friday which includes a certificate from the country’s Financial Intelligence Centre. This provides information on Gupta financial transactions worth a staggering R6.8bn which are under investigation for contravening money laundering, exchange control and corruption regulations. Coming on top of the temporarily blocked but incredibly damning Public Protector’s report into State Capture allegations, and it’s obvious to all that the noose is tightening on the Guptas. As it is, too, on their deeply complicit associate President Jacob Zuma. – Alec Hogg

The Gupta family is under investigation by South Africa’s Financial Intelligence Centre (FIC) for more than 70 banking transactions involving almost R7bn. Included in these is the apparent transfer of R1.3bn from a trust fund to pay for the rehabilitation of a coal mine that they recently bought.

Information about these transactions – three of which are are worth over R1bn – are included in an affidavit submitted to the Pretoria High Court on Friday by the country’s Finance Minister Pravin Gordhan. In this lengthy document, published online by the amaBhungane Centre for Investigative Journalism, Gordhan has approached the court to force the Big Four banks to disclose the full details of each transaction.

SA and international legislation requires banks to report any suspicious transactions to the FIC. But the law also prevents the FIC from disclosing such reports, even to the Finance Minister, unless they form part of legal proceedings.

Ironically, this expose’ of the inner workings of Gupta money machinations is a direct result of the family’s indignation that its accounts were closed by all of the SA banks. Gordhan’s affidavit details correspondence with the Gupta CEO Nazeem Howa which first demand and then entreat him to intervene against the banks – despite being told continuously that this would be illegal.

The three Gupta brothers, who hail from the dusty north Indian town of Saharanpur arrived in SA in 1994 while in their mid-20s. Their original intentions were modest, but as they discovered how easily leverage could be acquired among some of the political elite, they invested in building relationships with the newly powerful, including now President Jacob Zuma.

Included in the Gupta assets are an underground uranium mine which had been abandoned as uneconomic by both Anglo American and Uranium One; the 103-employee Sahara Computers; and a sprawling media operation in Midrand which publishes Zuma-promoting newspaper The New Age and similarly positioned cable television news channel ANN7.

One of the most serious issues raised in the Gordhan affidavit is the transfer by the Guptas of R1.34bn held in trust for rehabilitation of the Optimum Coal Mine in Mpumalanga. By law, these funds are not accessible for any purpose other than restoring the environment to the condition it was in before mining began.

A company owned by the Guptas and one of Zuma’s sons, Tegeta, acquired Optimum for a bargain basement price of R2.1bn from multinational Glencore. The Guptas were assisted in their negotiations by the recently appointed Minister of Mines, who has suddenly been elevated to the post from a lowly provincial position.

The price was also affected by a dispute between the mine and Eskom, which had levied a R2.3bn fine on Optimum. After the Gupta acquisition, this fine was cancelled. It was later uncovered that Eskom had advanced R578m to the Guptas to assist them in settling the purchase. Until now, the source of the other R1.5bn that the family paid to Glencore had been a mystery to local bankers.

The affidavit also shows that questionable banking transactions conducted by the Guptas has accelerated in recent times. There was only one, worth R860 000, in 2012 and five (R3m) in 2013. In 2014 this rose to six dodgy transactions involving R85m and was down to two (R7.5m) last year.

But in 2016 the banks reported one transaction in January; eight in February; 16 in March and 25 in April, including two worth over R1bn. The R1.34bn from the rehabilitation trust was apparently transferred from Standard Bank to the Indian-owned Bank of Baroda after permission was granted by the Department of Mineral Resources.

The annexures that were filed with Finance Minister Pravin Gordhan’s affidavit on the Oakbay/banks matter.