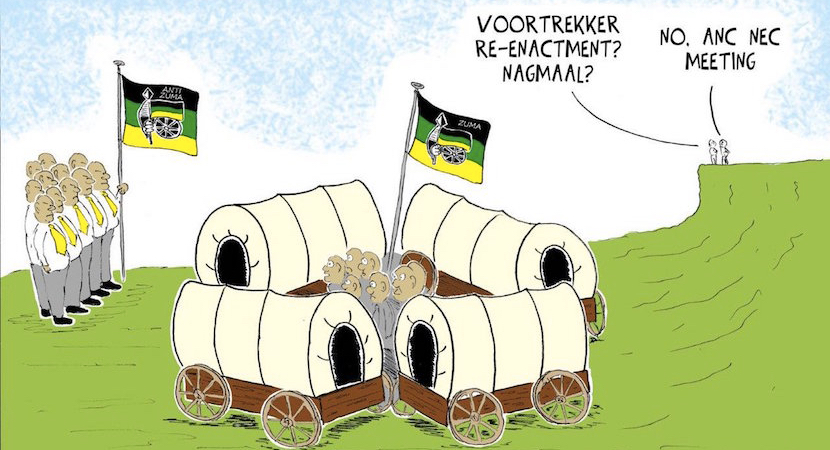 JOHANNESBURG — A 13 hour back and forth negotiation has led the ANC National Executive Committee to recall South African president Jacob Zuma. Secretary General Ace Magashule did not divulge any information as to why the NEC recalled uBaba in his press briefing but he did expect the President to respond by tomorrow – in the same breath he said there was no deadline on the response. The spokesperson in the office of the ANC’s chief whip, Nonceba Mhlauli, however did confirm to EWN that the party’s caucus will have a special meeting at 10am tomorrow morning, which may ultimately be Zuma’s unwritten deadline. South Africans are being asked to exercise extreme patience as the country’s focus has shifted away from key matters such as unemployment and anaemic economic growth. And with the National Budget to be delivered next week, one can only hope the rating agencies can exercise something similar. They say good things come to those that wait. This may be one of those times for South Africans. – Stuart Lowman

The National Executive Committee (NEC) of the African National Congress (ANC) convened a special meeting on Monday, 12th February 2018 at the Saint George Hotel, Tshwane. The meeting was called to reflect on the current situation as it pertains to the position of the President of the Republic of South Africa, Comrade Jacob Zuma.

The NEC received a report from the Officials on their engagement with President Zuma. These engagements had been informed by the commitment to pursue firstly the interest of the country and the ANC and the determination to handle the matter with utmost dignity.

The NEC noted the report of the Officials that the President had agreed in principle to resign and had proposed time frames extending from three to six months. While appreciating President Zuma’s proposal, the NEC noted that South Africa is going through a period of uncertainty and anxiety as a result of the unresolved matter of transition. Further that this uncertainty and anxiety will erode the renewed hope and confidence among South Africans since the 54th National Conference of the ANC.

The National Executive Committee firmly believes that this situation requires us to act with urgency in order to steer our country towards greater levels of unity, renewal and hope. We are determined to restore the integrity of the public institutions, create political stability and urgent economic recovery. Some of the matters we are contending with are the opportunistic manoeuvers by the opposition in parliament including motions of no confidence in the President, calls for dissolution for parliament and other desperate acts. The ANC’s approach to this matter has, at all times, been informed by the interests of the South African people.

The NEC therefore decided as follows:

To recall its deployee, Comrade Jacob Zuma, in accordance with Rule 12.2.21.2 of the ANC Constitution, which accords the NEC the authority to “recall any public representative”.

There should be continuing interaction between the officials of the ANC and the President of the Republic.

The decision by the NEC to recall its deployee was taken only after exhaustive discussion on the impact such a recall would have on the country, the ANC and the functioning of government.

To sum up: ANC NEC is recalling Zuma, and holding thumbs he will resign in due course (today, tomorrow, next week, next month?), and have no plan B if he does not. Looks weak.

The decision of the NEC provides certainty to the people of South Africa at a time when the economic and social challenges facing the country require urgent and resolute response by all sections of society.

It is critical that South Africans are united around the task of growth, job creation and economic transformation.

This decision will be communicated publicly and through appropriate forums to all structures of the ANC, Alliance Structures and all the Mass Democratic Formations.

All necessary parliamentary processes that arise from this decision will now ensue.

Business Leadership South Africa (BLSA) welcomes the courageous decision by the ANC’s national executive committee – the highest decision-making structure in between national conferences – to recall President Jacob Zuma after his refusal to voluntarily step down.

Bonang Mohale, the CEO of BLSA, said: “The refusal to resign shows Mr Zuma, and his defenders and supporters are driven by nothing more than avarice, myopia and unbridled self-interest, and it demonstrates that he’s uniquely unfit to hold this important office.”

The impasse over his tenure has created debilitating uncertainty for our economy as it has deferred important political calendar events including the delivery of the State of the Nation Address (SONA), which effectively opens Parliament, and has threatened the National Budget’s delivery.

“It’s now important to end the two-week chaos. We urge the ANC’s new leadership to act swiftly, but constitutionally, in removing their deployee from the high office so that work of recovering our future which was imperilled by his ruinous regime – characterised by incompetence, corruption, state capture and low economic growth – can begin in earnest,”.

“The task of rebuilding and strengthening the economy in order to address the triple challenges of poverty, unemployment and inequality cannot be postponed any further”. Mohale added.

The African National Congress’s National Executive Committee didn’t set a deadline for Zuma to resign and wanted to give him “time and space” to respond to the decision taken during a 13-hour meeting that ended early Tuesday, ANC Secretary-General Ace Magashule said. While Zuma agreed to step down, he wanted to remain in office for up to six months, which the party considered too long.

“The decision of the NEC is now final,” he said. “That decision can’t change. We are not treating Jacob Zuma as a leader who is defiant. We will treat him with dignity. There is no need for us to humiliate him. I’m sure the president will respond tomorrow.”

The decision to order him to go marked the failure of efforts to agree to an amicable transfer of power from Zuma’s scandal-ridden administration. The ANC wants Ramaphosa, 65, to take over as soon as possible before elections next year so he has time to show he can meet his pledges to rebuild a battered economy — the most industrialized in Africa — and clamp down on the graft.

ANC for a decade: Zuma is fine. We love Zuma. He’s awesome. Zuma rocks. We love him. Allegations are allegations. Viva Zuma.

The rand erased gains to weaken 0.2 percent to 11.9572 per dollar by 2:36 p.m. in Johannesburg. Yields on benchmark government rand bonds due December 2026 climbed six basis points to 8.45 percent.

Unless Zuma agrees to the decision soon, the ANC may have to order its lawmakers in parliament to approve a motion of no confidence in the president. The political impasse already forced the unprecedented postponement of last week’s scheduled annual state-of-the-nation address and may imperil the presentation of the budget on Feb. 21. Magashule said the party hasn’t proposed a no-confidence motion.

“The ANC’s decision to recall Jacob Zuma is a political death sentence from which there can be no escape,” Ben Payton, head of Africa Research at Verisk Maplecroft, a Bath, England-based risk-advisory company, said by email. “Whether or not Zuma agrees to resign is ultimately irrelevant. If Zuma refuses to leave office he will face a vote of confidence in parliament which he is certain to lose.”

The ANC will convene a special meeting of its parliamentary caucus on Wednesday, its chief whip, Jackson Mthembu, said, without revealing what would be discussed. Magashule said the party’s leaders will inform its lawmakers of the NEC’s decision.

I really hope the ANC told Zuma why they have recalled him. Otherwise, till the end of time he’ll be saying: What have I done? #Zexit

Zuma, the ANC’s former head of intelligence, took office in May 2009 just weeks after prosecutors dropped graft charges against him. He spent years fighting a bid by opposition parties to have those charges reinstated and fending off allegations that he allowed members of the Gupta family, who are in business with one of his sons, to influence cabinet appointments and the award of state contracts.

“Ramaphosa would have much preferred Zuma to maintain the facade that he was leaving office voluntarily,” Payton said. “The recall vote risks alienating ANC supporters in KwaZulu-Natal, where Zuma continues to enjoy substantial support. However, leaving Zuma in place would have been a bigger risk for Ramaphosa, given the political imperative to take a stand against corruption.”