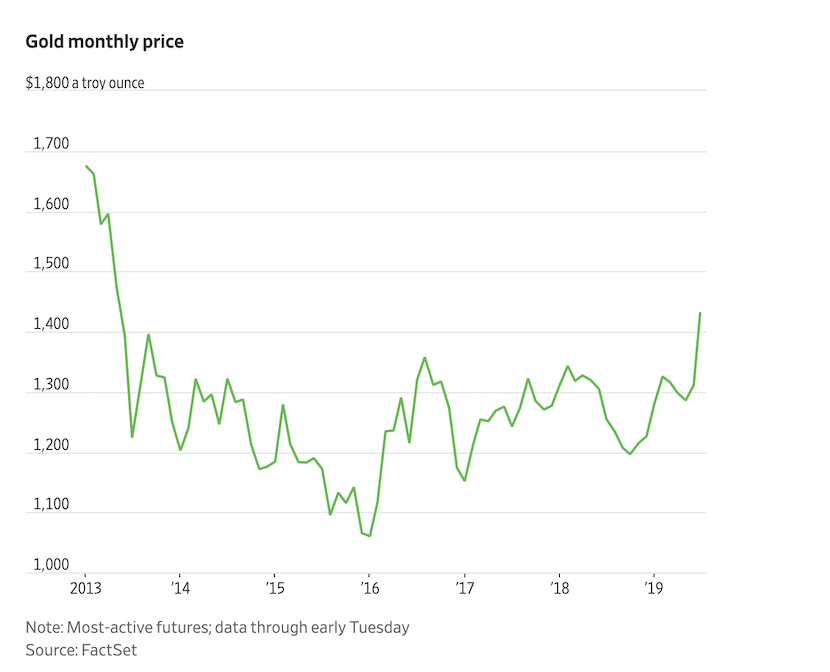 There might be conflict in the workplace, but on the financial markets South African mining stocks haven’t done this well since the peak of the last great resources bull run. The surge in prices has been driven by a potent cocktail of a weaker domestic currency and the steady rise in costs translating into high leverage to rising global commodity prices. And as the graphs below illustrate, it’s not just gold shares that are rewarding shareholders. – Alec Hogg

(Bloomberg) — South African mining stocks haven’t had it this good since 2008.

Thanks to surging iron ore, gold and platinum-group metals, a Johannesburg index of mining equities has climbed 30% this year. Miners account for seven of the market’s 10 best-performing stocks in 2019.

Concerns about iron-ore supplies after shutdowns in Brazil and storms in Australia have pushed prices to five-year highs this month. Bullion has rallied to the highest since 2013 as geopolitical tensions prompt investors to seek safer assets. South African platinum companies have benefited from soaring prices for palladium and rhodium, mined alongside their main product. The 5.3% decline in the rand over 12 months has also helped miners that have their costs in local currency but produce dollar-priced commodities.

The FTSE/JSE Africa Mining Index rose 1.2% to the highest since July 2008. Global giant BHP Group Plc’s Johannesburg-traded stock was the biggest contributor to Tuesday’s gains, advancing as much as 1.8% to the highest on record.