Investing perceptions lie in the hands of the investor, and as Ted Black has experienced, his views aren’t always favoured by the masses. More so when the analysis he puts together is on one of the JSE’s top performers – Naspers. Even harder when that stock literally carries an exchange’s performance. Ted’s analysis uses the ROAM method (Return on Assets Managed) which is the measurement of profits shown as a percentage of the capital that is handled. And as Naspers gears up for the Prosus listing in Amsterdam, Ted has applied this principle to some of the other businesses under the umbrella. And accordingly it shows Tencent to be like a one-trick pony, as the rest loss money. If investing was a simple straight line, everyone would be rich. But it’s not unfortunately, so it’s important to see how others view a stock. And as Ted quotes Russell Ackoff in the article below: ‘The more views of a thing, the better we can understand it… complete understanding of anything can be approached continuously but never attained.” – Stuart Lowman

My last Naspers article caused a fierce reaction. An analyst viewed it as shallow, worthless rubbish. Disappointed that Biznews even published it, he then revealed a somewhat patronising view of investors. He said it would cause them needless anxiety.

He also said that ROAM is the wrong method for analysing a holding company like Naspers because it is “equity accounted”. Operational measures do not apply – it should rather be viewed on a “sum of the parts” basis. If you were to apply the ROAM measure to Remgro, RMH and RMI he believed you would come to the same conclusion.

The real issue arising from contrasting points-of-view, is that our experience and understanding of the world is always limited. It means, as the late Russell Ackoff – a pioneer of systems thinking and operational research – said, “The more views of a thing, the better we can understand it … complete understanding of anything can be approached continuously but never attained.”

It also means there’s no point in arguing who is right or wrong but rather what we can discuss and learn from the differing standpoints – especially now when Naspers is to list in Europe, and there is more controversy over Bob van Dijk’s pay package. Like most CEOs, his performance incentives are linked mainly to the share price – the wrong measure by far of his and any other CEO’s competence.

As I said in my earlier article, using ROAM with Asset Turnover as a key part of the measure, might not be a good way to assess Naspers’ management ability as it is more of an investment company.

However, Cash ROAM (Cash Operating Profit ÷ Assets), a simple but not simplistic measure, still seems to apply. Even Naspers states in its 2018 Annual Report: “We rigorously manage our assets and capital allocation for growth.” Sadly they don’t say “for productivity and growth”.

But let’s compare relative Cash ROAM performance with Tencent, Remgro, RMH and RMI over a five-year period and link it to market Value-of-the-Firm (VOF). 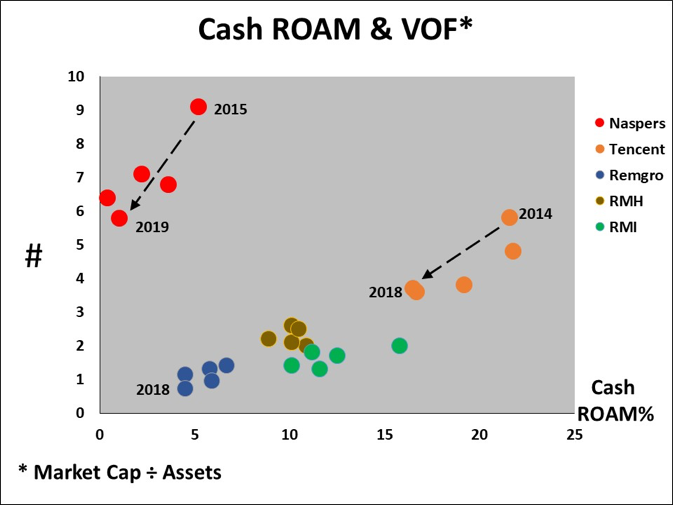 The correlation is clear. The ROAM number won’t tell you when to buy or sell shares, but the chart certainly signals that the value of any firm is rooted in the productivity of its asset base. No matter if it’s an investment company, as all these are, or for operating companies in which all these firms are invested. The lower the Cash ROAM, the lower the valuation is likely to be.

Today, Tencent constitutes almost 80% of Naspers internet sales and 113% of its EBITDA. The rest loses money, albeit less than before. The next chart shows the link with their market values. 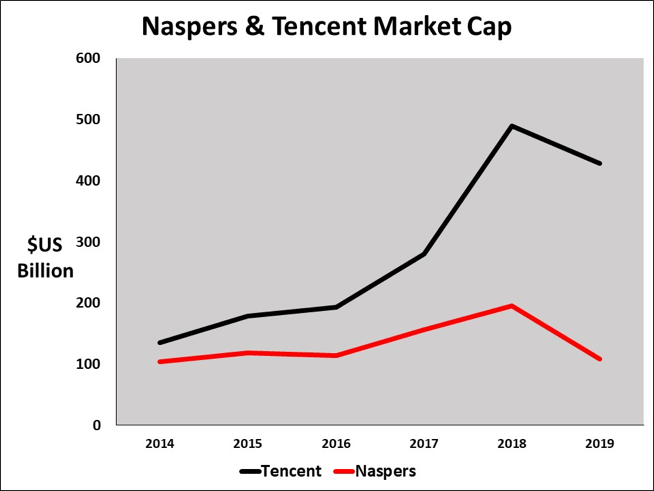 Isn’t the message for shareholders that all the good eggs are in one basket – Tencent’s? And to watch that basket because the rest of Naspers is almost irrelevant?

Indeed, if you look at Mailru, with 80% of its asset base being intangible, its ROAM is only 7% and falling. Delivery Hero and Make My Trip are losing less but they also have a big intangible asset burden of around 50%. So how are the rest performing?

Until assets managed, including intangible ones, are shown in the segmental analysis you’ll never know, which takes us to the analyst’s “sum of the parts” valuation. Naspers is a perfect example of Bruce Hendersons’s view (founder of Boston Consulting Group):

“A multi-division company without an overall strategy is not as good as the sum of its parts. It is merely a portfolio of non-liquid, non-tradable investments, with added overhead and constraints. Such closed-end investments properly sell at a discount from the sum of the parts. Intuition alone is an inadequate substitution for an integrated strategy.”

Those words provide clear direction, even a challenge, for van Dijk and his team. Do they have a clear strategy? A wag once described it as, “Throwing mud against the wall and seeing what sticks!”

The problem/opportunity they face is investor perceptions and how to influence them in a way that enhances the value of Naspers and closes the discount gap.

The difficulty is that there’s more to perception than meets the eye as Michael Halbert observed in his 1965 book “The Meaning and Sources of Marketing Theory”. Because what we “see” depends heavily on past experience, we expect, want or are used to “seeing” some things more than others. The less objective information we get from outside, the more subjective we become. We ignore or screen out what threatens us. We are always highly selective, biased and strongly defensive.

With management perceptions, there is a Master Myth that can lead to big risk taking: All things being equal, higher risk is rewarded with higher returns at investment, industry, and company levels. However, the reality is that within an industry, winners achieve a high-return, low-risk position. Losers are forced into high-risk, low-return positions.

So how might investors view Tencent, the discounted Naspers “Rump” and the others we have looked at? This is how they could be positioned in an “Investor Perceptions” matrix that links risk and return … 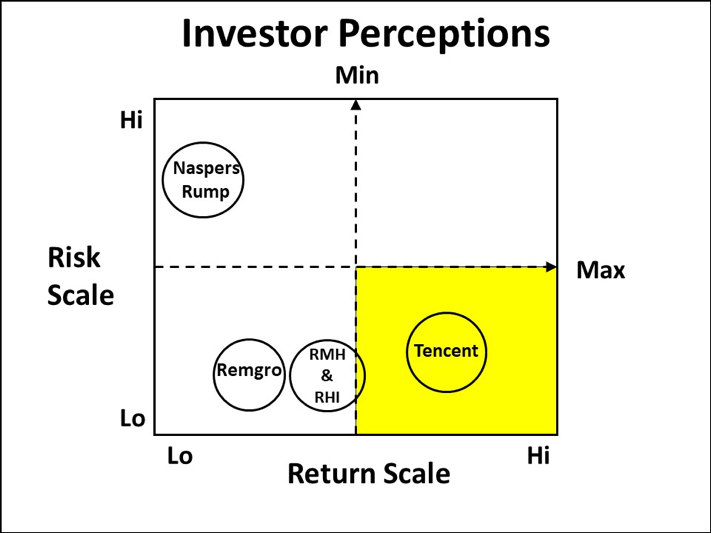 … but what do you think? As a shareholder, where would you place these firms when thinking about risk and return?

Given the constant questions being raised about Naspers, isn’t it time perhaps for Bob van Dijk and his management team to focus as much on marketing the firm and its strategy as it does on products and services? In other words, how to get Naspers into the bottom right hand segment of the matrix.

To kick off the process, two questions they might ask are: How do we want to be perceived in say, three to five years’ time? For which opportunities and achievements do we wish to be most highly valued?

The answers could point the way to task clarity, focus and concentration of effort and resources, higher ROAM and market value that isn’t so dependent on Tencent.