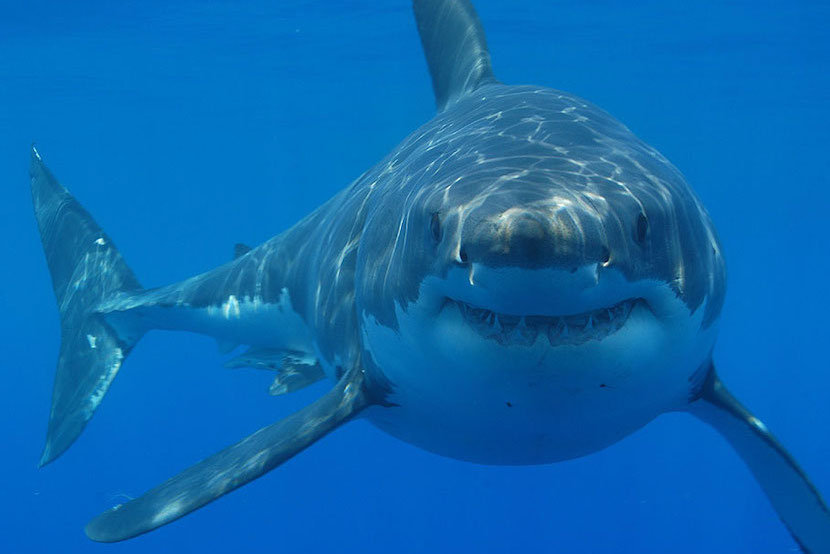 For a variety of speculative reasons, no great white sharks have been seen in False Bay, Cape Town, so far this year – an unprecedented occurrence. Surfers on the False Bay coastline, skittish after several fatal attacks over recent years, still flinch when large fins break the surface nearby – but they’re harmless bronze whalers or seven-gill sharks, making almost unprecedented appearances closer to shore. Their sightings are being linked to the missing great whites who normally prey on them on the fringes of the deep kelp forests and/or drop offs near Seal Island. It’s all a bit alarming for tourism, especially for the cage diving industry, whose bookings have halved. Marine biologists say the larger impact on the eco-system and food chain is as-yet-unmeasured and suspect the gradual movement of fish stocks eastwards to be a contributor. Another factor is the greater local presence of Orcas, discerning diners who kill great whites for their tasty livers. Meanwhile there’s a spat between provincial and national conservation officials, the former peeved by the latter’s publicising of developments. Sightings or positive confirmations (40 are tagged) have dropped by three quarters since 2010. Meanwhile, surf’s up and a lot less dangerous – for now. – Chris Bateman

(Bloomberg) – Capetonians don’t know who to blame for the disappearance of their great white sharks: The orcas that eat them, the fishermen who sell their prey to Australia for use in fish-and-chips shops or gradual ecological change.

The world’s biggest predatory fish haven’t been seen this year in False Bay, which lies off the city’s eastern coast, according to scientists and cage-diving operators. While the absence may be temporary it’s creating concern because, along with vineyards, the iconic Table Mountain and world-class restaurants the species is key to a $2.6 billion provincial tourism industry.

“Its unprecedented that they aren’t here,” said Gregg Oelofse, who oversees coastal management for the City of Cape Town. “To think that they may no longer be here is tragic. They are central to Cape Town’s identity.”

The loss of the two-ton sharks from False Bay, where they are famed for leaping out of the water in pursuit of seals, prompted the city to put out a press release in August noting their disappearance, drawing the ire of state officials.

The sharks support a cage-diving industry that provides employment for as many as 750 people, according to a city agency, and a vibrant documentary making scene. There’s concern that many of the thousands of tourists who view sharks off the city’s coast may go elsewhere.

Spotters, who began monitoring the city’s beaches 14 years ago after a series of fatal attacks, haven’t seen a great white in 2019 after averaging 205 sightings between 2010 and 2016. Sightings fell to 50 last year. A number of whale carcasses that washed ashore had no shark bites, an unusual occurrence.

The national government criticised the assessment of the situation by Cape Town’s municipality.

“The department is unable to corroborate the City of Cape Town’s statements,” it said. “There is a need to focus all management decisions on information that is factual and scientifically sound,” it said, saying that cage divers and scientists have seen great whites in the bay.

The three cage-diving operators in False Bay, who lower tourists into the water around Seal Island to view the 4.5 meter (15-foot) sharks, say they have not spotted any this year and the about 40 tagged sharks haven’t been picked up by sensors in the bay.

The state fisheries department hasn’t released assessments of the impact of fishing on the stocks of the great white’s prey for several years.

Papers written by the government’s own scientists noted the increasing scarcity of the sharks and a 2018 study said the smooth hound and soupfin types they eat were likely over-fished. The department didn’t respond to questions on the effect of so-called demersal shark long-line fishing that sees small sharks sent to Australia where they are sold as “flake.”

Still, great whites are a migratory species and are more common around the middle of the year in Cape Town. Also, scientists say fish stocks appear to be moving gradually east.

“Great whites are highly migratory animals that can swim great distances,” said Bernard Seret, a marine biologist who worked as a shark specialist at the French National Museum of Natural History. “If they are still absent a year from now, scientists could start developing hypotheses. It’s much too soon to draw any conclusions.”

In 2005, a great white shark – named Nicole after Australian actress Nicole Kidman – that had been tagged in South Africa, swam to Australia and back.

The arrival four years ago of two male orcas, known as Port and Starboard as their dorsal fins are bent to the left and right respectively, may have had an effect. The two orcas hunt large sharks, whose livers they tear out and eat before discarding the rest of the carcass.

There have been instances elsewhere including California’s Farallon Islands where great whites have temporarily left after being preyed on by orcas, according to Alison Kock, a marine biologist at the Cape Research Centre. There is evidence of them eating both great white and sevengill sharks in False Bay, she added.

“Port and Starboard came to the island one Sunday, smashed a few sharks and the sharks didn’t come back for three weeks,” said Stef Swanson, the owner of Shark Explorers, one of the cage-dive companies.

“With the white shark crisis, many of those clients have canceled their bookings,” said Swanson, the web page of who’s company – like its two rivals – features a great white, noting that bookings are down 50%. “At the end of the day the client wants to see the white shark. It’s part of their bucket list.”

Already there have been changes. Seals are swimming more openly away from the island, sevengill sharks have emerged from the kelp forests and bronze whaler sharks have been seen swimming near beaches.

“White sharks influence hundreds of species in the bay, either through direct predation or by the fear of predation,” Kock said. “Their continued absence will likely result in more ecological changes, many of which we can’t predict.”