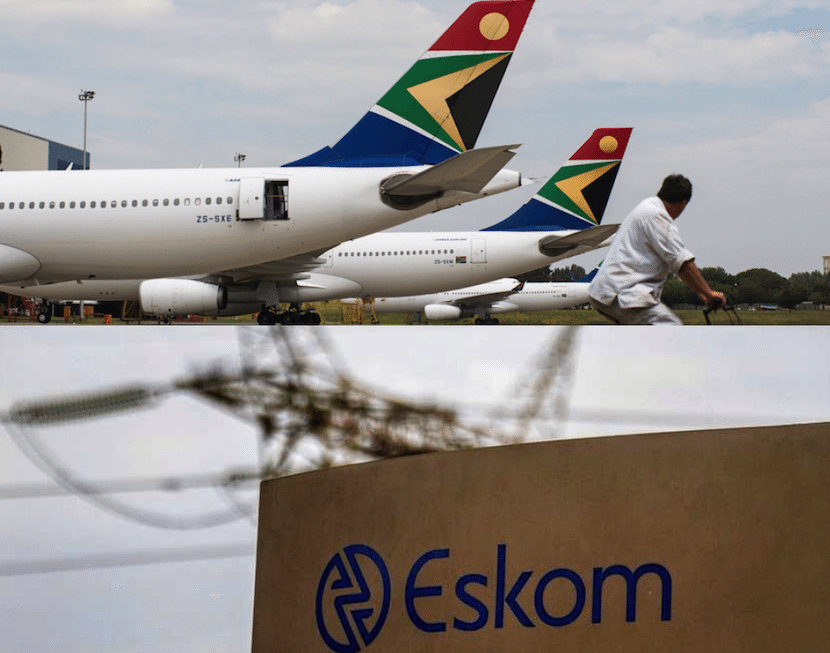 SOEs (State-owned enterprises) such as South African Airways and Eskom continue to fail South Africans on a daily basis, with poor service delivery and mismanaged funds. Yet they rely on those same citizens for bailouts. Using taxpayers’ money to assist these flatlining enterprises clearly isn’t working as their bosses come back each time with forlorn looks on their faces, begging for more. In a piece on SAA written by Sunil Shah, the entrepreneur and investment professional discusses what else the money could be used for. Important issues such as housing and medical expenses could be tackled and assisted, instead of prolonging the life of two contentious companies which continue to suckle on the teat of the taxpayer. Below, Jacques Jonker discusses why government should be banned from providing taxpayer-guaranteed debt assistance to state-owned enterprises. – Jarryd Neves

According to the preamble of the Public Finance Management Act (PFMA), the Act exists to ensure that, amongst other things, “… all revenue, expenditure, assets and liabilities of that government [national government] are management efficiently and effectively”

Section 2 of the PFMA enshrines its objective to “… secure transparency, accountability, and sound management of… revenue, expenditure, assets and liabilities…”

Whilst these are noble goals, it is doubtful whether the PFMA is worth the paper that it is written on when one considers the sheer scale of corruption and wasteful expenditure within the South African government.

What most encapsulates this blatant disregard for the preamble and objective of the PFMA, is the wasteful and inefficient expenditure on state-owned enterprises (SOEs), most notable South African Airways (SAA).

According to independent transport economist, Dr Joachim Vermooten, ever since government placed SAA under the direct control of the Department of Public Enterprises (DPE) in 2007, taxpayers have been forced to provide a total of R42.709 billion in cash to dilapidated airline, along with debt guarantees totalling R26.314 billion, as of the February 2020 budget. Notwithstanding the immense problems with providing cash bailouts to SOEs driven into the ground through sheer incompetence, it is time to address the nefarious practice of issuing taxpayer-backed debt guarantees to these companies.

Taxpayers aren’t only forced to guarantee government debt within the context of bailing out SOEs. Whenever government sells bonds on the open market, taxpayers are effectively the foundation of the guarantee provided to the bond holders that government will pay to the holders when the bonds mature. So, taxpayer-backed guaranteed debt is nothing new. The problem is that it is spiralling out of control, as was clearly illustrated in the figures provided above.

Read also: Zondo to ask Zuma and Ramaphosa: What did you do to stop corruption at SOEs?

If the PFMA’s preamble and objectives are to be given effect to, it is crucial that an amendment not only be seriously considered, but actually be tabled in Parliament, that amends the Act by inserting a provision that makes it illegal for any state organ or official to provide any form of debt guarantee to any public entity listed in Schedules 2 and 3 of the Act. The amendment ought also make changes to sections 66 and 70 of the Act, which deal with borrowing and guarantees. Any other relevant provisions that require amendment to achieve this purpose should, by necessity, also be subjected to the amendment process.

Forcing taxpayers to guarantee debt to inefficient public entities has the effect of ring-fencing funds that could have been used productively elsewhere, such as in the area of human capital investment.

Amending the PFMA would, however, not only serve its own objectives, but it would give substantive effect to the values and principles of public administration enshrined in section 195 of the Constitution. Currently, the PFMA gives formal legal effect to the provisions in section 195, but the substance is missing.

There is also a broader issue at play here, and that is the issue of narrative.

When engaging on the issue of bailouts, we tend to speak of government providing the bailouts. Whilst that may be true in the sense that the money flows from the accounts of National Treasury, an organ of state, to the accounts of whichever mismanaged SOE requires them, we should not miss sight of the bigger picture, which is that those monies are not government’s. Those monies, by and large, represent the fruits of South Africans’ labour, expropriated by the state, and in the case of South Africa, largely without compensation, considering how inadequate service delivery is.

But the money squandered on SOEs do not represent the only costs. They only represent the direct costs to citizens. The indirect costs, that is the opportunity costs of not using the money elsewhere, are severe, and it is the poor and marginalised who disproportionately bear these costs.

For instance, the average construction cost of an RDP house is around R157,801, notwithstanding provincial deviations around this value. The R26.314 billion that has been ring-fenced for SAA over the past thirteen years could instead have been utilised to provide housing for roughly 166,754 households in need of it. Or, government could have covered the tuition fees for roughly 67,994 medical students, which would have pre-empted the need to import medical slave labour from a foreign dictatorship like Cuba to deal with the effects of a global pandemic on an ill-equipped healthcare sector.

It is crucial that the narrative surrounding bailouts be amended along with the PFMA if we are to win the war against an overbearing kleptocratic state. Government has shown itself more than willing to continuously and unashamedly undermine the Constitution, the Rule of Law, and the provisions of various pieces of legislation that serve to hold it accountable. Desperate times call for desperate measures, though it would be ideal to live in the world where taxpayers are never forced to guarantee loans to failing companies, private or public, in the first place.

Join top broadcaster Tim Modise, Mike Marchant of Open Secrets and Tebogo Khaas of the SMME Forum at the BizNews Thursday Noon Webinar. ‘The Plundemic during the Pandemic’, as Khaas calls it, has angered a lot of South Africans who are calling for drastic action to be taken. Register here: https://attendee.gotowebinar.com/register/8398038334086112016