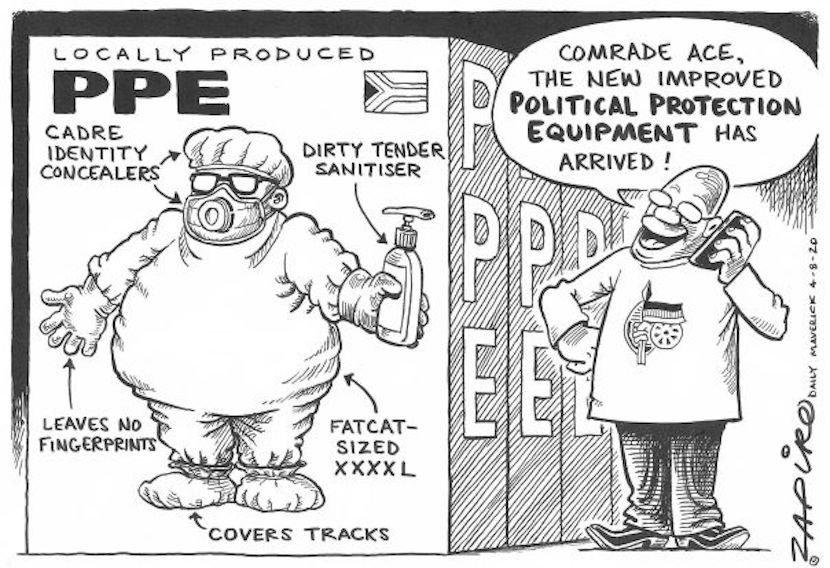 Secretary-general Ace Magashule says that the party is outraged and embarrassed by allegations that ‘some of its own’ seek to unlawfully benefit from the suffering caused by Covid-19. This follows a meeting in late July where the ANC’s National Executive Committee (NEC) met to discuss corruption and plans for economic recovery. However, Magashule’s name has been mentioned a few times in connection with strange dealings. His sons, Tshepiso and Thato, were awarded government contracts for Covid-19 goods and services, and Magashule himself is at the heart of a Zondo commission inquiry. Join the conversation on corruption this Thursday (6 August) at Tim Modise’s noon free-to-air webinar. This week’s guests are the head of the country’s great hope in the fight against corruption: Special Investigating Unit head Advocate Andy Mothibi; Sipho Ngwema, the spokesperson of the National Prosecuting Authority; and Advocate Selby Makgotho of the Special Tribunal. It’s not to be missed. Register here. – Claire Badenhorst

ANC statement on the outcomes of the National Executive Committee 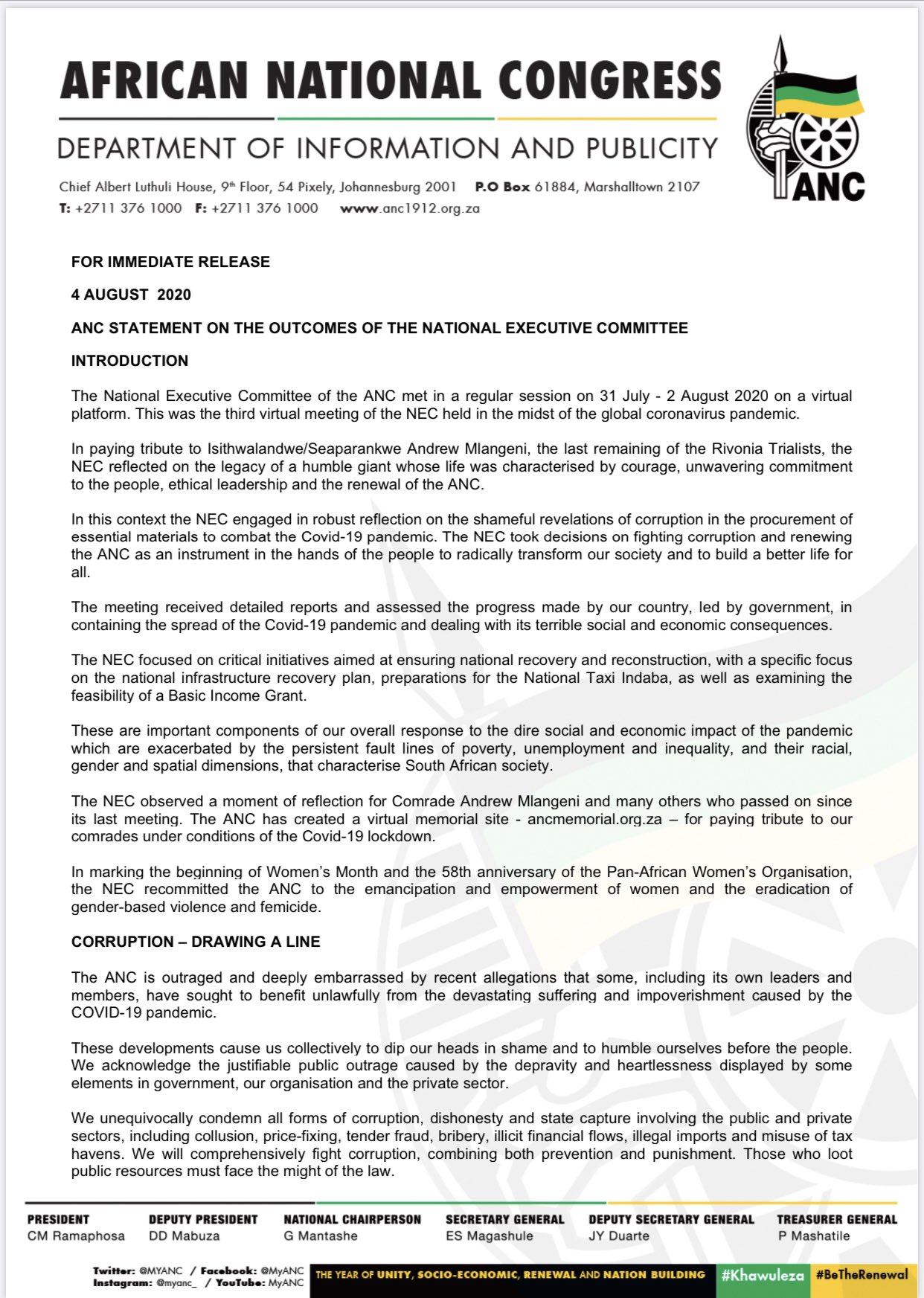 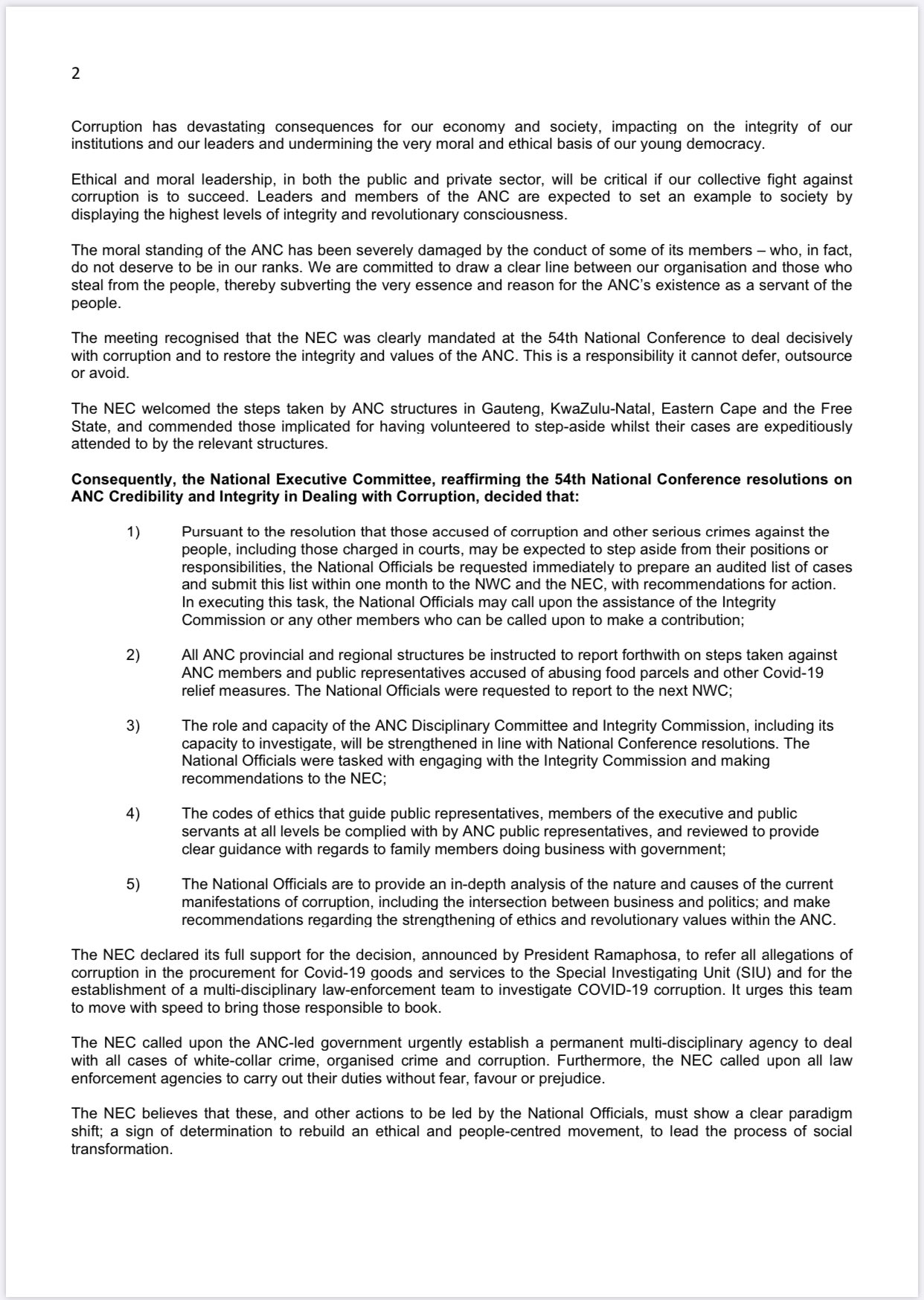 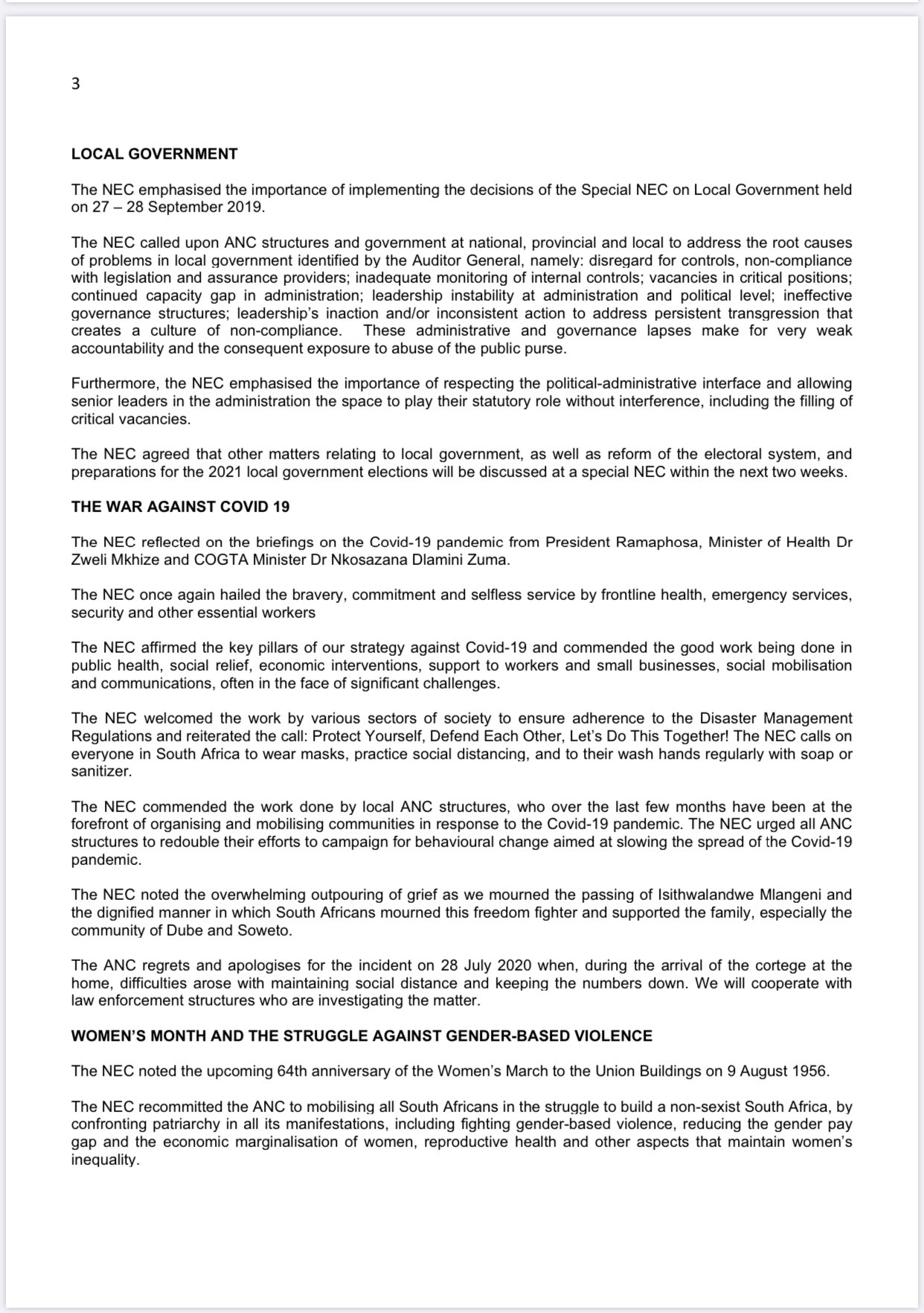 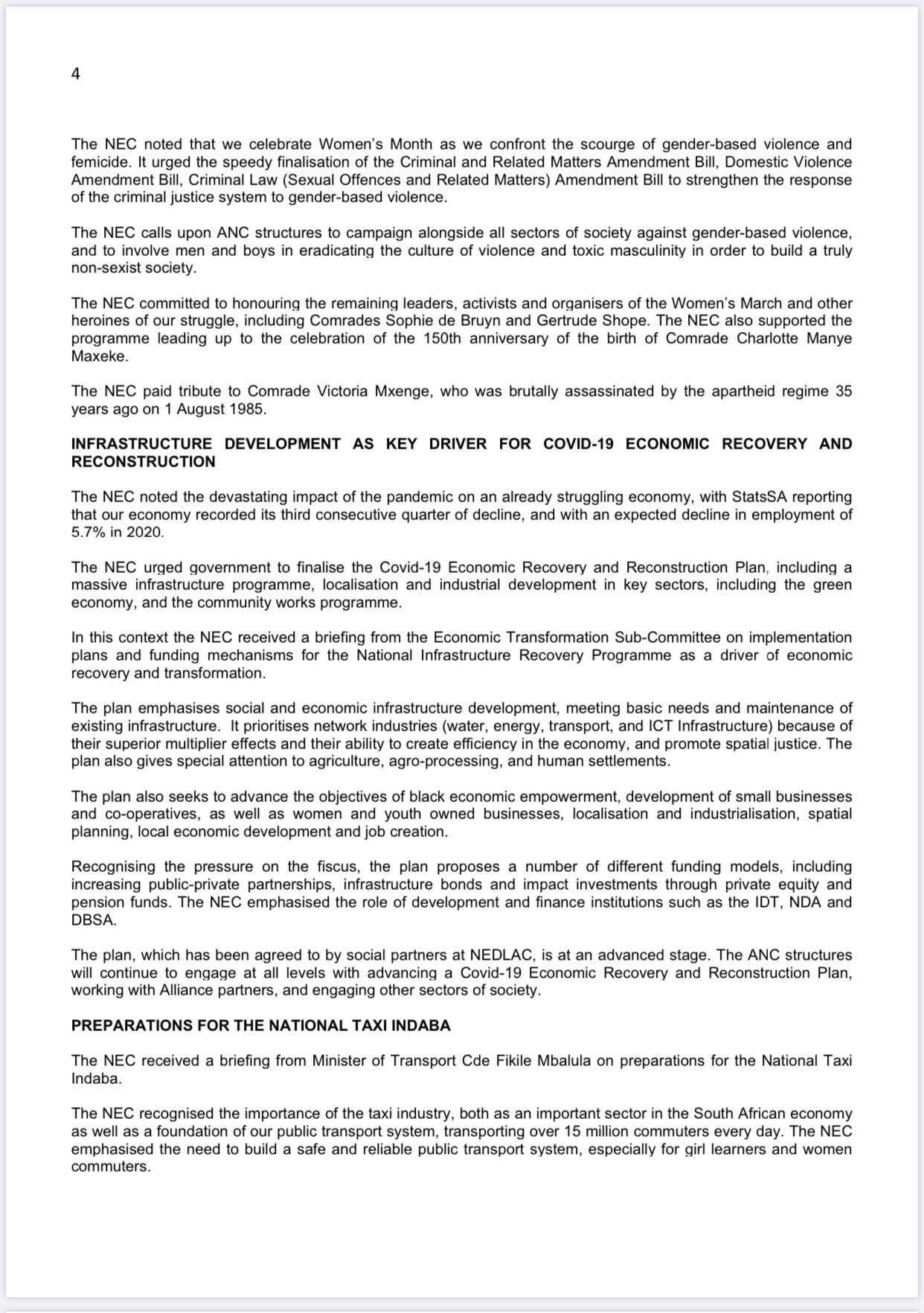 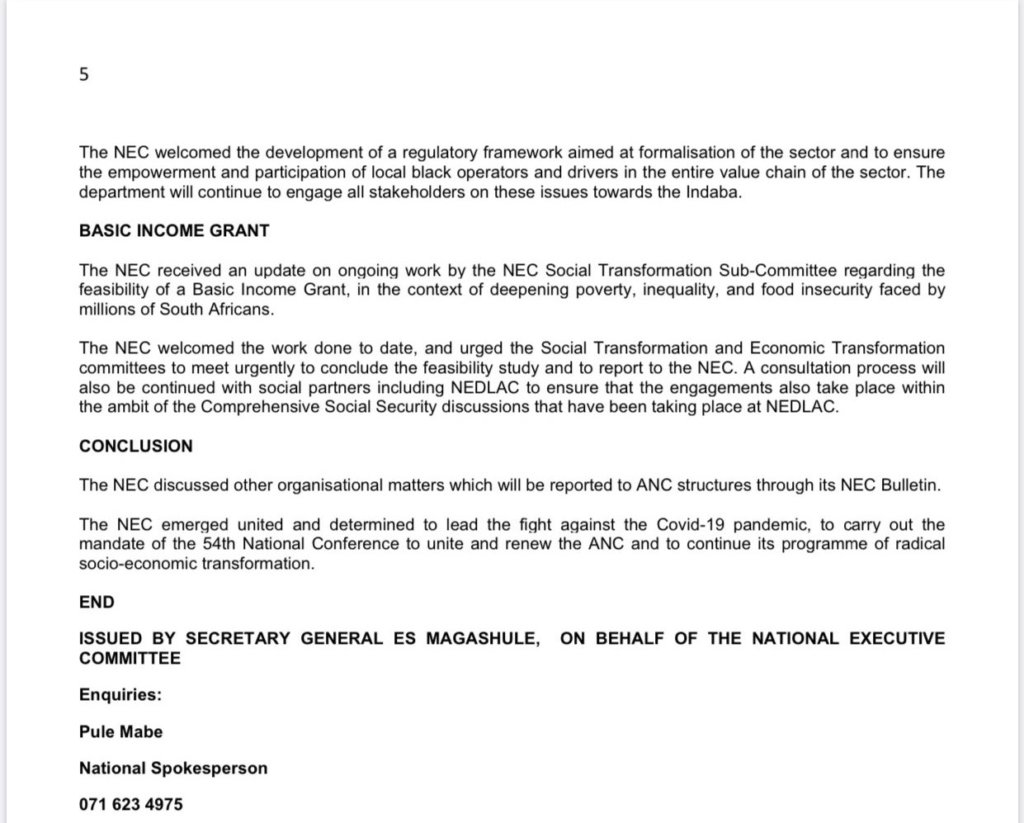 The ANC’s national executive committee says it’s “embarrassed and outraged” at the PPE corruption claims. How do you feel? #SAfmSunrise @SAfmRadio

ANC NEC: comedians or taking us for fools? Embarrassed about corruption, drawing a line! Those accused “may” step aside – not must, MAY. Last month they reinstated the VBS gang – just allegations they said, so what’s changed? We’ll believe them when Ace steps aside#702Breakfast

During an interview where ANC NEC spokesperson @pulemabe is asked about how “ashamed” the ANC is about its corruption, he failed to answer why @ANCParliament allowed a convicted fraudster Tony Yengeni to HEAD up the ANC corruption committee. What a joke. #ANCashamedofnothing

Imagine Bongo, a guy accused of corruption after he allegedly offered advocate Vanara “an unlawful gratification”, remaining Chair of a committee of parliament; Zwane as well and the two sitting in the NEC of the ANC deciding on ethical and integrity matters. A bioscope script

I like how the ANC and its MPs are pretending like PPE corruption caught them by surprise.

Ace Magashule says the ANC is outraged and ashamed by reports of corruption? Please let me wake up from this hilarious but very scary dream!

ANC NEC we are going to punish you come next year. You will be embarrassed for real. @MYANC we wont vote for you we are going to put someone in charge and you will be number 3 or 4 in the list. Until you root out corruption in the moment. Forget about our votes. We are tired.