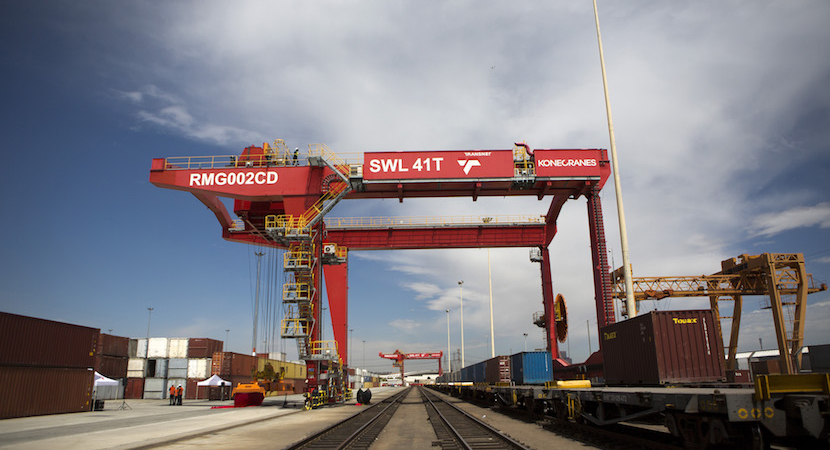 Francois Nortje joined the BizNews Power Hour to discuss the recent statement from Transnet. CEO Portia Derby announced that the SOE will be seeking private sector partners to purchase stakes in two container terminals, Durban and Ngqura – two of the world’s worst performing ports. Speaking to Bloomberg, Derby said that the plan is “really important for improving the performance of our port system.” Nortje joined BizNews founder Alec Hogg to discuss what the privatisation of Transnet would mean, how much investment would be required and how it would work. – Jarryd Neves

There [have been] rumours to that effect since the beginning of last year, but you never know with [hearsay]. Now, however, we’ve got a formal announcement. We spoke about [this topic] three weeks ago – private sector help is needed. It is a big organisation and it’s complex. I think it’s the right thing. I’m very happy [about this decision], it is something that we needed.

On whether anyone would want to take control of Transnet ports:

I’m sure there’s people that will take over, if they’re allowed. There’s enough cargo flowing through, so there’s money to be made – it’s just specialised stuff that’s involved. It’s not [like] running a little shop. I spoke to a friend about this recently, and we’re of the humble opinion that Transnet needs somebody like Brian Joffe or Gianni Ravazzotti. It’s a big, complex organisation. These state-owned entities need the help of private sector guys who specialise in that. I honestly think it’s the way forward and hopefully the unions will support it and see why it’s happening.

On what the potential partnership with private sector companies could mean for Transnet:

I think they’ll have to allow two or maybe three [companies] to create competition. There’s a few people that can get involved – Cosco can get involved. They took over some port in Greece 7-8 years ago. It was a terrible port, not featuring on the radar. Now, it’s the best port in Europe. Then, there’s the guys that run Singapore port – I think they’re called Hutchinson’s. There’s Dubai port, Maersk and MSC. There are six people that, I think, can compete to run on portions of [the ports]. They can [also] share the Natcor line to Johannesburg and each have a terminal there. We can have efficiencies and the whole country can benefit. Logistics costs can come down, because we need the whole system to work – road and rail. We can’t just have the N3 to do the job.

On what kind of investment this would require:

That’s a good question. A few billion rand, at least – it can’t be less than that. R10 billion, R100 billion they’re talking. These projects are always under costed, so it might cost more than a R100 billion. And Transnet’s balance sheet can’t handle it – they just can’t borrow that kind of money. So they have to get these guys in – but it’s also the expertise that they bring. I know that there’s been rail specialists from Australia and Singapore that looked at it. The guys that will put in proposals [are] going to be sophisticated logistics companies who have international experience – knowing how the whole value chain eco-system must work.

On what will happen to Transnet in all of this:

They’ll get smaller. It’s basically what’s happened to SAA, [getting] the private sector in. It’s basically what happened with Telkom, which was a fully state-owned company. They sold shares and got private sector guys to run it. It looks like that’s the model we are following in South Africa. If we can just speed it up and take it to its natural progression, then it will be good for us because this is needed.

We’re not going to have full privatisation, it looks like it, under the current ANC government. But at least they acknowledge that they need some expertise. I think they got stunned by the World Bank report, where Transnet Durban was, I think, the third worst port in the world. They need [the] private sector to be as productive, innovative, clever and [share the] best techniques in the world to reduce losses [and] to make it actually viable.